Philippines: Legacy of a volunteering father 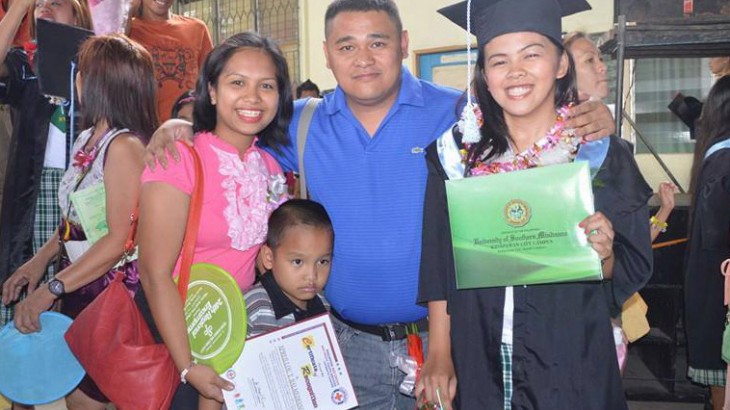 Apreillou Balmediano, with her brother Bryan and family after her college commencement ceremony. CC BY-NC-ND / ICRC / A. Balmediano

Benny Balmediano used to reprimand his eldest son, Bryan, for spending more time with the Philippine Red Cross (PRC) than with his family. Little did Benny know that his son was helping to save countless lives.

Then in 2004, Benny had a cardiac arrest. Bryan's know-how on first aid and cardiopulmonary resuscitation saved Benny's life. After that experience, Benny realized the true impact of his son's work in the PRC.

Benny joined the International Red Cross and Red Crescent Movement and became a volunteer driver and emergency responder for the PRC in North Cotabato-Kidapawan City sub-chapter. He even encouraged his daughter, Apreillou, to volunteer for the Red Cross.

On 19 February 2012, a call came in requesting all Red Cross volunteers to be ready to respond as there was a developing incident in Kidapawan City – armed men had attacked the Kidapawan City Jail.

That night, Benny and Bryan, together with other committed volunteers, rushed to the scene to help people wounded by an explosion. Unfortunately, another explosion occurred. Benny was seriously injured as he tried to shield Bryan, who was a few meters away.

Benny took his last breath while in his son's arms.

On that fateful day, Apreillou was far away from home to play in a school tournament. The 17-year-old had promised her father that she would finish her studies and win a medal in every badminton competition she would enter as a university player.

"Someone sent me a text message offering their condolences. I wondered why. I asked the person who had passed away and was told that my father died in a bomb explosion in Kidapawan. I was even texting my father at that moment," she said.

Her coach noticed Apreillou's silence and asked why she was not her usual self. Apreillou told her coach about the death of her father. She decided, however, to continue with the tournament, to bring a medal home as her father had made her promise. And she won that promised medal.

"It was difficult to continue with the tournament but I did it all for him," she said. "I didn't feel mad at the Red Cross. Even though Papa had died while volunteering, I was proud of him."

With her father gone, Apreillou felt lost and uncertain of her promise to graduate from university and become a teacher like her father had always wanted her to be.

Then one day, she learnt that the ICRC – with the endorsement of the PRC and through the French Fund Maurice de Madre (FFMM) – would fully support her education. She was grateful for the opportunity to continue her studies. This strengthened her desire to fulfill the promise she had made to her father to get a university degree.

For two years, the FFMM funded her education, while financial assistance given by the PRC also helped support her. Apreillou, now 22, is working hard to become a licenced teacher.

Volunteering for the Red Cross

With the promise she made to her father fulfilled, Apreillou plans to continue his legacy by volunteering for the Red Cross, along with her older brother.

Apreillou is currently taking a short four-month course for emergency medical technicians. Once completed, Apreillou may work for the Red Cross or the City Disaster Risk Reduction Council.

The French Fund Maurice de Madre was established thanks to the generosity of Comte Maurice de Madre, who died in 1970. In his will, he bequeathed part of his property to the ICRC on condition that it be used for certain purposes.