Statement to 74th Session of UN General Assembly, 49th plenary meeting, item 71: "Strengthening of the coordination of humanitarian and disaster relief assistance of the United Nations, including economic assistance" 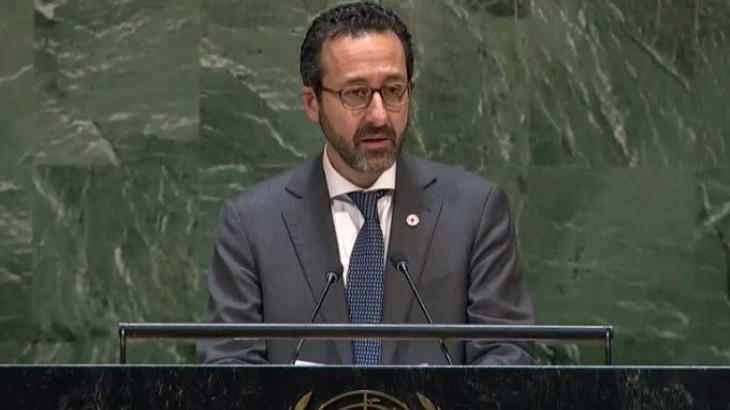 As delivered by Mr. Robert Mardini, Permanent Observer to the United Nations and Head of Delegation, ICRC New York

As we culminate this year marking the 70th anniversary of the Geneva Conventions, the ICRC is heartened to see so many events around the world demonstrating States' strong support for these essential rules of war.

Despite a rapidly changing operational landscape and deep and growing needs, a fundamental commitment to humanitarian principles and action holds firm. Given that obligations to protect civilians, the wounded and the detained are central to the Conventions, this is encouraging.

To further this momentum, the ICRC would like to draw attention to three pressing concerns affecting people's protection and the provision of relief that States must address: 1) a deficit of trust, 2) people wrongly deprived of their liberty because of association with certain armed groups, and 3) urban conflict.

First, principled humanitarian action relies on trust – between humanitarians and parties to conflict, the affected population and donors. Without this trust, it is difficult to ensure that the provision of relief and the protection of vulnerable people is managed safely and to high standards.

The ICRC is working to improve our accountability to States and conflict-affected people, strengthening integrity measures and improving our community engagement and accountability. Building trust was a major priority at our Red Cross Red Crescent Movement's 33rd International Conference which has just ended, and we will take forward commitments made.

Our second concern is about people wrongly deprived of their protections under the law because of their association or perceived association with certain armed groups or those designated as terrorists. Governments are leaving people stranded in legal limbo, without due process of law, and without providing the legal protections to which they are entitled.

International Humanitarian Law applies to everyone affected by armed conflict, without exception. All actors must accept their legal obligations towards this group of people, and ensure that they do not face discrimination.

This includes holding open – rather than restricting – the space for principled humanitarian action, including ensuring there are effective safeguards for such action within legitimate security frameworks and actions taken by States.

Finally, when they are carried out in urban areas, it is essential that the conduct of hostilities and law enforcement operations be in accordance with the law. The world is rapidly urbanizing with more people living in cities and urban areas. Armed conflict and violence in these areas can have devastating consequences on people and the infrastructure they depend on to live.

We call on all States and parties to armed conflict to avoid the use of explosive weapons with a wide impact area in populated areas, in line with the joint statement by the ICRC President and the UN Secretary-General, and to make further progress on outcomes of the Vienna Conference in 2020.

We also recognize the importance of national authorities, municipal authorities and development actors working together to ensure the continuity of life-sustaining and life-saving urban services in the water, health, electricity, education and economic sectors.

Development finance is essential to the continuity of urban infrastructure and services. We welcome efforts by governments and international finance institutions to maintain an impartial pipeline of development finance into all urban areas of countries affected by conflict, fragility and violence.

Addressing the challenges laid out in this statement would be an important sign of commitment to our common humanity, to principled humanitarian action and to the Geneva Conventions at the end of this 70th Anniversary year. The ICRC is ready to assist States in carrying out their obligations and commitments in this year and in years to come.