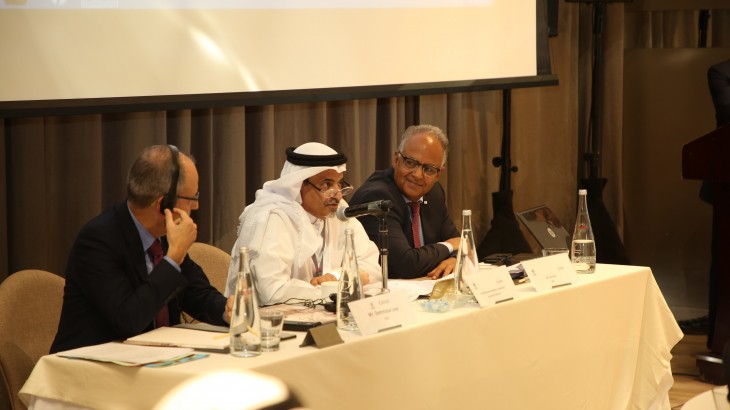 Doha (ICRC/QRCS)– Senior leaders and staff from National Red Cross and Red Crescent Societies from across the Middle East, Africa, central Asia and Europe are gathering in Doha from 30 to 31 October to discuss the implementation of an action plan and global advocacy strategy for eliminating nuclear weapons. The workshop, co-hosted by the Qatar Red Crescent Society (QRCS) and the International Committee of the Red Cross (ICRC), is an opportunity for 30 participants, primarily from States that support but have not yet ratified the 2017 Treaty on the Prohibition of Nuclear Weapons, to exchange views with experts.

By equipping the participants with the necessary knowledge and tools to understand and communicate on the catastrophic humanitarian consequences of the use of nuclear weapons, the workshop is intended to strengthen their capacity to promote the signature and ratification of the Treaty on the Prohibition of Nuclear Weapons and other relevant legal commitments by their national authorities, and to plan relevant and effective interventions with a range of audiences and government authorities.

"We welcome the Qatar Red Crescent Society’s enthusiasm to co-host this important workshop. It is bringing together a wide range of partners, at a time of increased international tensions, in a region where millions of people are suffering devastating consequences of armed conflict. I look forward to our discussions on how we can work together in the coming months and years to ensuring that the Treaty's great promise of a world free of the terrible threat of nuclear weapons is achieved," said Yahia Alibi, the ICRC’s head of regional delegation for the GCC countries.

"In the coming two days, we hope we will develop the understanding, tools and plans to help ensure the treaty becomes a living international instrument that can help shape history. This begins with our work with our governments and populations to ensure that each of our countries signs and ratifies the Treaty on the Prohibition of Nuclear Weapons in the shortest possible time and is in a position to implement and promote it as future State Parties," said Dr Mohammed Al-Maadheed, President of the Qatar Red Crescent Society.

Dominique Loye, the ICRC’s deputy director of Law and Policy, stressed that the outcome of the workshop will be of utmost importance. "Our efforts to ensure that nuclear weapons are never used again and are eliminated are based on the same humanitarian and international humanitarian law foundations as historic efforts to prohibit chemical, biological and other particularly horrific weapons’ he said. In all these cases the focus has been not on who possesses the weapons but on the nature of the weapon itself and its humanitarian consequences. Stigmatization of the weapon as unacceptable in moral and humanitarian terms is a first step. Its legal prohibition under any circumstances is a second step. Finally, the total and irreversible elimination is an indispensable guarantee that the weapon will never again be used. All successful global disarmament treaties are based on this approach and rooted in international humanitarian law," he said.

Note to the editors:

The Treaty on the Prohibition of Nuclear Weapons (TPNW) is the first globally applicable multilateral agreement to comprehensively prohibit nuclear weapons. It is also the first to include provisions to help address the humanitarian consequences of nuclear weapon use and testing. The Treaty complements existing international agreements on nuclear weapons, in particular the Treaty on the Non-Proliferation of Nuclear Weapons, the Comprehensive Nuclear-Test-Ban Treaty and agreements establishing nuclear-weapon-free zones. The TPNW was adopted by a United Nations diplomatic conference on 7 July 2017 and opened for signature on 20 September 2017. It will enter into force once 50 States have notified the UN Secretary-General that they agree to be bound by it. An essential next step is to ensure that all of the 131 States that voted for the adoption of the treaty at the time of its negotiation or at the UN General Assembly sign and ratify the treaty. Currently 69 of these States have signed and 19 have ratified, with 50 ratifications needed to ensure that the treaty enters into force.

In 2017, the Council of Delegates, which brings together national Red Cross and Red Crescent societies from 191 countries, the International Federation and the ICRC, adopted an ambitious resolution committing the International Red Cross and Crescent Movement to enhanced international efforts to (a) promote adherence to the Treaty on the Prohibition of Nuclear Weapons (TPNW) and implementation commitments under the NPT and other relevant treaties and (b) promote urgent steps to reduce the growing risks of nuclear weapon use. The Movement's (the Red Cross and Red Crescent Societies, International Federation and ICRC) commitments are being implemented through an Action Plan 2018-2021 and a global advocacy strategy.