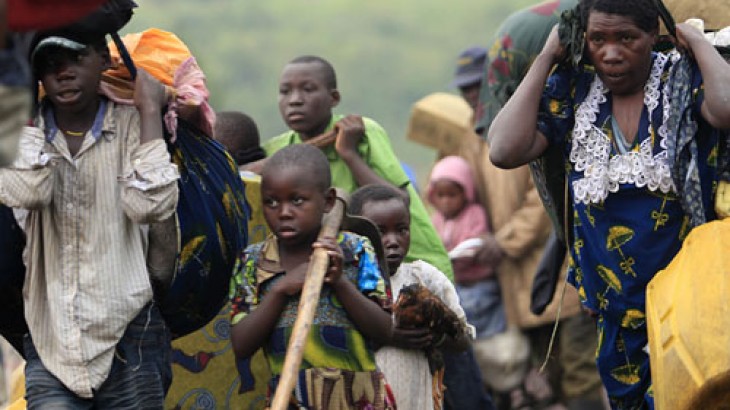 The number of internally displaced persons worldwide has reached an unprecedented level. If the international community is to curb this trend, it must address two distinct challenges.

The first is better conflict prevention and resolution – tasks that are primarily incumbent upon States.

... the people concerned are best placed to assess when and where they feel secure. They should be allowed to decide whether or not they will move, unless their security or imperative military reasons so require.

The second is greater protection of civilians affected by armed conflict. Far too often, civilians are not only placed in danger during military operations, but are also deliberately attacked or subjected to serious violence at the hands of armed actors, in violation of established norms and principles. Improved compliance with existing rules would both significantly reduce the need for civilians to flee their homes and allow them to return as soon as hostilities have ceased. While the primary responsibility lies with the parties to the conflict, all States have an obligation to respect and ensure respect for international humanitarian law, as set out in Article 1 common to the Geneva Conventions. This requires States to take action both in peacetime (at domestic level) and when conflict erupts. The International Committee of the Red Cross (ICRC) reiterates its readiness to support States in their efforts towards compliance with humanitarian law.

Internally displaced persons are an integral subset of the civilian population, and as such they lie at the core of the ICRC’s mandate. While not focussing solely on specific categories of victims, the ICRC is acutely aware that the internally displaced often urgently need protection and assistance, particularly those in combat zones, besieged areas, remote locations or otherwise beyond the reach of other humanitarian actors. Thus, of the five million beneficiaries who have received ICRC food aid in 2014, more than 88%, or 4.4 million, were internally displaced persons. Similarly, they account for 77% of those who have received essential household items so far this year. Another key ICRC’s activity is restoring family links, including reuniting separated children with their families.

In recent years, greater attention has been given to preventing displacement in the first place. All too often, however, this has been construed as preventing people who fear for their safety from moving to a safer place. The ICRC would like to stress that the people concerned are best placed to assess when and where they feel secure. They should be allowed to decide whether or not they will move, unless their security or imperative military reasons so require. If they decide to leave, they have a right to voluntary return in safety to their homes or habitual places of residence as soon as the reason for their displacement cease to exist.

Through proximity with displacement-affected communities, the ICRC seeks to gain a clear understanding of the causes of displacement and of the prevailing problems in the place of arrival. Besides helping affected communities, it seeks to establish and maintain a confidential dialogue with all relevant stakeholders, including non-State armed groups, to prevent further displacement and improve the protection of those who have been displaced. Through this dialogue, the ICRC raises its humanitarian concerns, reminds parties of their obligations under humanitarian law, and urges them to take the necessary preventive or remedial action.

For the ICRC to be accepted by the parties to a conflict, it must be understood as a strictly neutral, independent and impartial humanitarian organization. This is crucial for the safety of its staff, its access to victims, and for a meaningful protection dialogue with the relevant parties.

National Red Cross and Red Crescent Societies also play an important role. Adhering to the same set of Fundamental Principles, they are the ICRC’s primary partners. With their in-depth knowledge of prevailing conditions and solid volunteer network, they are sought-after partners for other humanitarian actors too, particularly when security concerns limit their own presence. To preserve the ability of National Societies to operate, care should be taken not to overstretch their capacities, and to ensure that their perception as neutral humanitarian organizations is not undermined by the authorities or agencies concerned.

Most internally displaced persons reside in relatively safe urban areas, yet their essential needs are often neglected year after year. They struggle to access adequate housing, livelihoods, education and other public services, which are often already weak and overburdened. Development organizations and government agencies are often best placed to respond in such circumstances, and should act at the earliest possible stage, rather than waiting for the conflict to end. Ensuring the proper functioning of critical infrastructure and services, such as water-distribution and sanitation systems, health-care facilities, schools and social protection programmes, helps not only to prevent huge setbacks in development, but also to lay the foundations for recovery..