Remembering Hanna Lahoud: ‘He cared for everyone around him’ 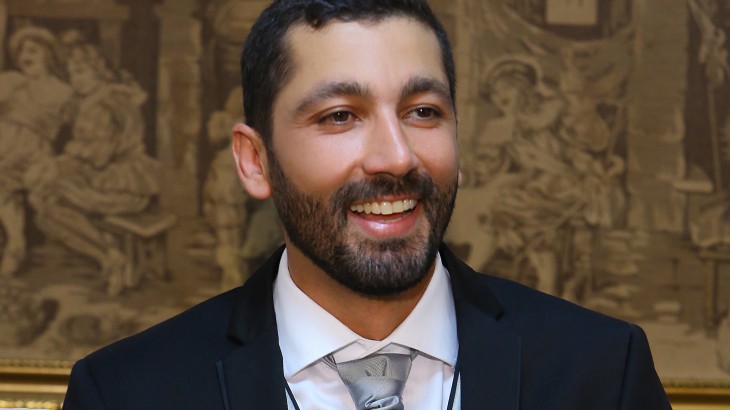 Hanna Lahoud, 37, died in Yemen on 21 April after being shot by an unknown gunman while on an ICRC work trip to visit a prison. Friends and colleagues Patrick Youssef, Fadi Farra and Majda Flihi share their memories of Hanna’s fierce friendship and his love of the Red Cross mission.

It was an addiction. Or maybe just dedicated passion. Either way, Hanna loved it.

The addiction? Unpaid overnight work on a Lebanese Red Cross ambulance team. One night shift a week and one weekend shift a month. Heart attacks, car accidents, CPR, we saw it all, and we knew we were making a difference. We all suffered from that high, this very positive addiction.

A Wednesday night in July 2002. That was when the three of us  Patrick, Fadi, and Hanna – worked our first shift together. Hanna was 22. The first time he spoke over the ambulance’s VHF radio he was so excited that his words came out in song, earning him his lifelong nickname inside the Lebanese Red Cross: Bouha, a derivative of Sabah, a famous singer.

Hanna worked for the Lebanese Red Cross for eight years. He advanced quickly, rising to team leader of 60 paramedics covering half of Beirut. A physiotherapist by education, he insisted on exemplary paramedic work. At car accidents he was meticulous with patients, providing empathetic human-to-human care.

This ambulance team experience is so intense that you actually absorb the seven Fundamental Principles of the Red Cross and the spirit of the Movement. When volunteering is in your DNA, the drive to get to the field is pure, and the International Committee of the Red Cross was the next natural step.

Hanna joined the ICRC in 2010 with the aim of going places he could do the most good. His first mission was detention work in Tunisia, and I remember he was surprised to be so quickly offered a managerial role in his next position, a head-of-office job in Tindouf, in southwest Algeria. It was quite remote, very much a desert, and not an easy place to live. But he tried to adapt a positive attitude.

A detention visit to Guantanamo came next, then a head-of-office position in Iraq, the country where he met his wife, Patricia.

The fighting was fierce in Ramadi in early 2014. Hanna and his team were organizing a food distribution for people fleeing western Anbar. While eating dinner one night amid shooting and shelling, Hanna went outside and shouted into the air: “Don’t you eat? Don’t you sleep? Don’t you stop to pray? Just give us 15 minutes of peace for dinner.”

Shortly thereafter he fell sick. He was medevac’d out before the distribution.

Hanna had wanted administration colleagues and drivers to be a part of this very important activity. His attitude was: This is what you are working for. You deserve to play a role. Majda, a close friend in the delegation, told Hanna about the distribution’s success by phone. “Finally done!” he said happily.

The cause of his sickness was soon confirmed: cancer. Hanna told few people. He started chemotherapy and was disappointed he could not return to Ramadi. The team there organized a Skype call that was full of tears; they were among the few who knew of his cancer. He had really transformed the staff there and they really loved him.

When the chemotherapy took his hair he bought some very flashy and colorful wigs, and he would wander around the hospital corridors and make everyone laugh. Doctors later asked him to come back and help current cancer patients. The treatment took eight months, a year if you count the recovery phase. In November, he proudly announced on Facebook that he had beaten cancer, a huge health victory that allowed him to return to work at the ICRC headquarters. Soon after, Hanna and Patricia got married and were assigned to Guinea Conakry.

Hanna was prone to outbursts when people were not doing the right thing or after witnessing injustice. A comedic streak ran through him but he just wouldn’t accept wrongdoing. He would fortunately calm down quickly afterwards and his joie de vivre returned. He treated everyone as equals – humans and teammates – not as subordinates or employees. When I was in Algeria and I told someone I was from Lebanon they would say: “Do you know Hanna?” Knowing him was a door opener.

The sense of unfair loss hung over the memorial ceremony in Beirut. Though only 37, Hanna has a strong legacy behind him, a word I don’t use often. He trained a generation of volunteers, and the entire ceremony belied a sense of national loss: the president of Lebanon tweeted about Hanna, a government minister attended, and Hanna was awarded a medal of honor. So many people from so many countries flew in to say goodbye.

I really do believe that some people are not born just to live but to give lessons to others, and he gave a lot of lessons to many, especially about justice, honesty and the true meaning of friendship. He cared for everyone around him.