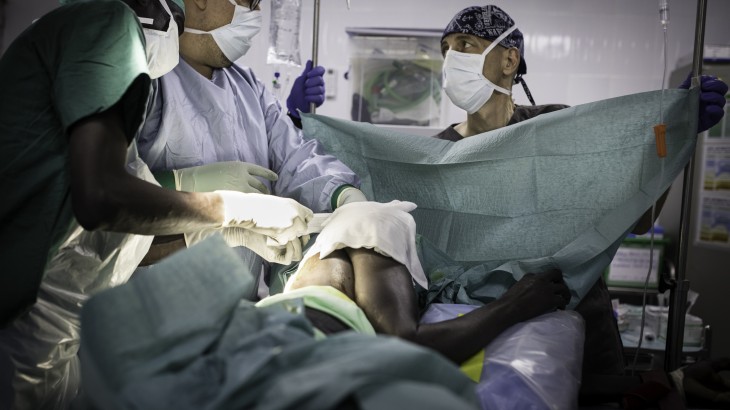 An ICRC medical team, in Ganyliel hospital, South Sudan, tends to a 21-year-old man who was shot in the chest and leg during an attack. Florian SERIEX/ICRC

A recent report drafted by the Swiss Institute of Comparative Law, in collaboration with the International Committee of the Red Cross (ICRC), provides a comparative analysis about whether domestic legislation in 22 countries discloses information regarding patients' gunshot wounds to authorities.

Around the world today there are huge concerns in armed conflicts and other emergencies about safeguarding the non-discriminatory and impartial provision of health care, which is protected under international humanitarian law (IHL) and international human rights law (IHRL). It is also a fundamental ethical principle of the health care profession. Lack of respect for these key protections, and ethical principle, along with the other fundamental ethical principle of medical confidentiality, whether through violent or other interferences, limits the access to health care of victims of armed conflict and other emergencies. As recognized by United Nations Security Council Resolution 2286 and the Secretary-General's recommendations, which condemned violence against health care and called for urgent action by States, strong domestic legal frameworks, are indispensable for preserving the ability of health-care professionals to perform their duties in line with these ethical professional duties.

On the other hand, adherence to these principles is weakened when domestic legislation imposes the duty on health professionals to report those who come to them seeking medical help for gunshot wounds. Such reporting requirements manifest obstacles to the ability of health care professionals to provide care without discrimination (and in accordance with their ethical obligations) and may lead to delays or even denial of health care.

Legal Opinion on the Obligation of Health Care Professionals to Report Gunshot Wounds is a report drafted by the Swiss Institute of Comparative Law (mandated by the Swiss Federal Department of Foreign Affairs), in collaboration with the ICRC. Within the framework of the ICRC's Health Care in Danger Initiative, this report contributes to the key objective of striving for domestic legislation conducive to implementing State obligations under IHL and applicable IHRL, which is also among the key demands to States in UNSCR 2286. It provides a comparative analysis of domestic legislation in 22 countries by exploring the general framework for medical confidentiality and whether domestic legislation enshrines the duty of disclosing information to authorities regarding patients' gunshot wounds. It further surveys whether any specific legislation protects the provision of health care in accordance with ethical principles and if/how any potential conflicts between protecting medical ethics and duty of disclosure may be resolved under the domestic legal framework.

The study comprises national reports from each of the countries covered followed by a comparative analysis. Through this analysis, an outline of the approaches taken to tackle issues of confidentiality and disclosure is provided along with the conditions and modalities of the duty to report gunshot wounds while highlighting interesting examples provided in the national reports. It finds that the existence of an obligation of doctor-patient confidentiality is essentially universal, while other than that there is little uniformity concerning the duty to report and its interplay with the duty of confidentiality among the countries covered and that no country provides for a specific procedure to resolve these conflicts.

The ICRC plans to use the report to identify where legislation and rules actually affect the direct provision of health care in certain contexts so that we can ensure that health professionals feel more confident in their ethical and legal duties and more people have access to health care when in need.

The ICRC recommends that States review their domestic legislation to make sure that provisions contained therein allow for safe and non-discriminatory access to health care in times of armed conflict and other emergencies.