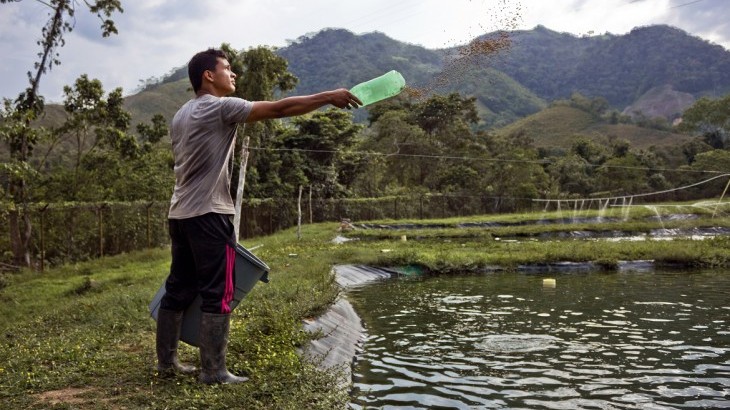 Not only was Wilson injured and unable to afford the trip to hospital, no longer able to work, he also lost the means of providing for his family.

"I am 24 and was a truck driver in Catatumbo, Norte de Santander. One day, I was driving to another village and there was a car bomb in the middle of the road. I stopped and then when I started the vehicle again, the bomb exploded. I was injured in the stomach and had to have a colostomy.

"A friend of mine came to my aid. He took me to hospital and they gave me some pain killers. Then I was moved to Ocaña. There, the doctor put his finger in my stomach and I went into a coma. When I woke up, I was in intensive care. My brother said: 'What I am going to do without any money or anything else'. He had no money for my transport or for my medical expenses. He went to the Red Cross, and they helped with everything.

"If I don't work, I don't eat. I have two little girls and my wife and I provide for them working with my truck, but my truck has been damaged. I applied to the government for assistance, but six months have passed and I haven't received anything. I have had various doctor's appointments. I have to go to Ocaña for an operation. They hadn't been able to operate so far, because the wound hadn't healed, but I am going to have the operation soon now.

"Those with weapons know why they are fighting, but me, all I am used to is working all the time; everybody knows that."

Why would they want to hurt me like this? I wasn't doing anything wrong.

Fanny and her children fled the violence in their region of Colombia, only to land up in a dangerous, run-down part of Medellín. The ICRC helped them start a mobile potato-selling business. Today, Fanny and her sons are independent, they're earning enough to live on and they can dare to hope again.

Roger comes from a part of Medellín plagued by gang warfare. If tyou come from there, no employer will touch you. But Roger was determined to get ahead. Thanks to the ICRC, he was able to open a small hairdressing salon. Today, he has high hopes of being able to support his family.

A comprehensive solution to restore livelihoods

In order to mitigate the vulnerability of people living in the midst of violence and to help restore their basic rights, the ICRC carried out activities in the areas of health, economic security and water and sanitation.