“The place where the sun rises.”

That is the direct translation of Mpumalanga, a province situated in the north-east of South Africa. Just a few weeks ago, it lived up to its name as a family who had been separated for 44 years were reunited for the first time.

It was in 1974 when Samson and his uncle, Sampinya Ndou, left their family home in Dite, a rural town in southern Zimbabwe, for South Africa. “At the time, everyone was migrating, and we saw other boys coming back as ‘Injiva’ looking good and we also wanted to go,” Samson said, laughing as he reminisced on days past.

They traveled overnight to Musina to lessen their changes of being caught. Samson recalls that he and his uncle were amongst those recruited by farmers and transported from Musina in the back of a truck unable to see the way, this he says was a method of ensuring that they would not move on to other farms while in South Africa.

In the 1970s, irregular migrants found in South Africa faced six months in jail if caught. Others died on the way, often by drowning in the river that divides the two countries or by being eaten by crocodiles.

The pair found employment on a tobacco farm in Badplaas in Mpumalanga owned by a man Samson jokingly remembers as Mashay’ikhwela, which means, ‘the one who whistles’ because he whistled constantly. Samson said life on the farm was pleasant and everyone was treated well.

After two years working on the farm, Samson decided to return to Zimbabwe and visit his family.

“When I left, I told Sampinya, ‘I’ll be back.’ I expected to return because I had work there,” Samson said.

It was 1976 and the fight for independence in Zimbabwe, then known as Rhodesia, had intensified, which made it impossible for Samson to return. That was the last time he saw his uncle. 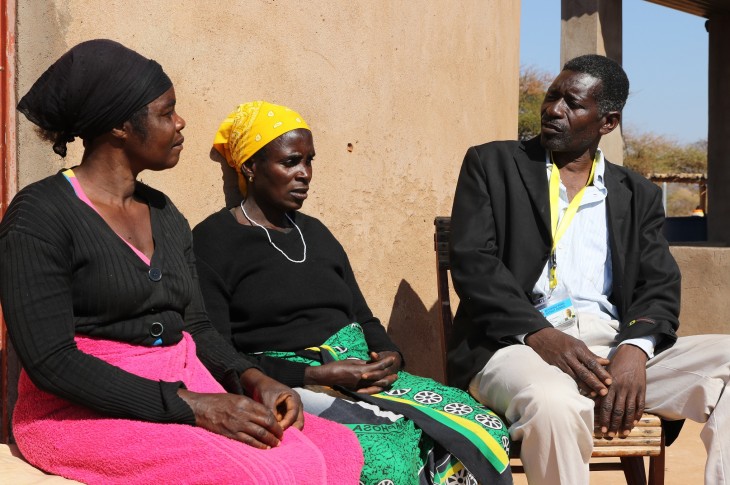 Angeline, Emudzani and Samson Ndou at their home in Dite situated in Beitbridge, Zimbabwe. Two of the three family members were preparing to meet their relative Sampiya Ndou, who they had not seen in over 40 years.

The first ten, twenty, 30 years passed and the Ndou family suffered insurmountable heartache over their missing relative. They thought he was dead. Sampinya’s parents died as did two of his siblings, but the remaining family kept the hope alive. It was in 2018 when the Ndou family heard about the International Committee of the Red Cross (ICRC) that they had a renewed sense of hope of finding their long lost relative.

They met Unita Ndou, who works with the ICRC to help families reconnect and maintain contact with each other when they’ve been separated due to migration, armed violence or natural disasters.

“It’s a difficult process,” Unita said. “It takes time. Tracing takes time. It can take weeks, months, years before you successfully trace someone. Sometimes you find that relatives have changed their name upon arrival in the destination country.”

This was true of Sampinya’s case.

She had no address, no contact information, no photograph in a country of 58 million people to find Sampinya with. The only information Unita had was the tobacco farm in Badplaas which may have changed considering the time that had lapsed.

Unita set out in Badplaas with an ICRC driver named Matthews, going farm to farm searching for Sampinya. It was getting late, and Unita knew they soon needed to call it quits, when she came across a man and took her chances. She called out, “Sampinya Ndou?”

He asked who she was and because they share the same last name, jokingly replied, “Have you come to take me home?” 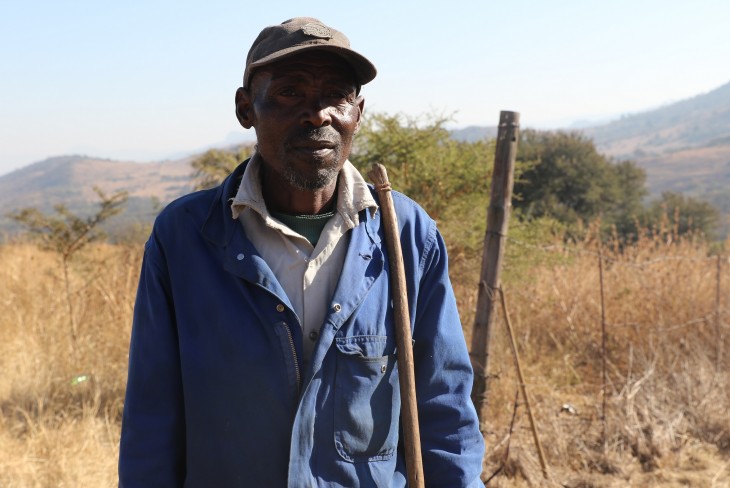 Sampinya Ndou on the farm in the Badplaas area of Mpumalanga where he works.

Unita could not believe it. She had found him. He had changed his name in South Africa. Unita quickly took a video of Sampinya on her phone and sent it to Samson back in Zimbabwe.

Samson immediately recognized his uncle from the video.

“I had lost hope of them finding him alive,” says Samson. “It had been a long time from 1976 until now. We thought he was dead, but we wanted to proceed with the search because whether he was found dead or alive that would have given us closure as a family.”

On a sunny but nippy Tuesday, Samson and Sampinya’s sister, Angeline, set out with the ICRC from Beitbridge to Mpumalanga.

“I am very happy and very anxious,” said Sampinya’s sister Angeline. “My brother left when we were very young. I am very anxious. I wouldn’t recognize his face even if I met him in the streets. I would rely on the Red Cross to take me to where my brother is. I’ve been anxious ever since I found out he was alive,” says Angeline. Her sister Emudzani stayed behind.

It was a two-day trip over dirt roads riddled with pot-holes. As the time went on, the anxiety intensified. The journey ended at a white house on a gravel road with no name.

Samson and Angeline stepped out of the car and spotted Sampinya in blue overalls. They walked slowly towards each other, almost unsure.

“Kunjani malume? How are you, uncle?” Samson Ndou said, as he greeted his uncle Sampinya with a handshake and a firm grip on his shoulder.

To the left stood Sampinya’s sister, Angelina anxiously waiting to meet her brother. The last time she saw him, she was five years old.

Sampinya also introduced them to his son, Bojtie who is 34. Botjie’s mother died several years ago.

That night, the family stayed together. 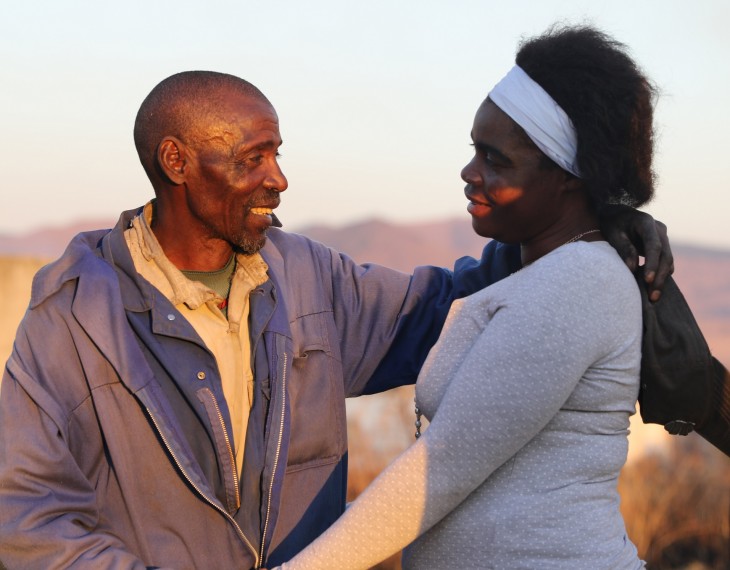 Brother and sister, Sampinya and Angeline Ndou meet for the first time after 44 years apart.

“We stayed up late talking,” said Angeline. “We spoke about the need for us to have a proper discussion with everyone and see how we can take them to Beitbridge to show them our home. We can find accommodation for them. They can come to South Africa for work and visit back home.”

Sampinya, now a South African citizen, longs to see the place he once called home. The family has been in constant contact and Sampinya plans to travel to Zimbabwe for Christmas.

“I remember all those years ago waiting for Samson to return, my heart was very sore,” Sampinya said, his voice raspy from smoking. “Hearing about the death of my other siblings is painful, but I am so glad to see Angeline. I did not recognize her or Samson. I’m glad to see that I still have some family.”

“In my heart, I had told myself that they had all died, that is what I thought.” 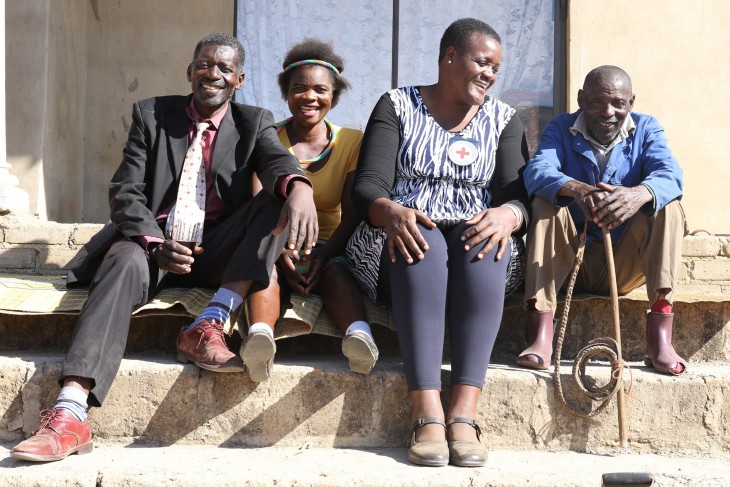