Saving lives through art - Mine Risk Awareness in Gaza 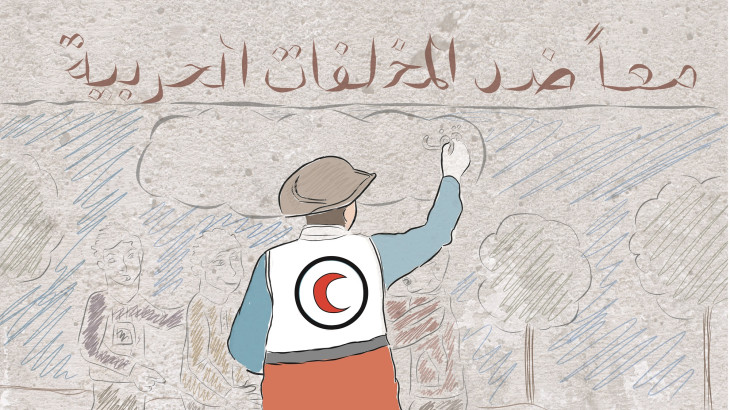 The people of Gaza are no strangers to danger and hardship. Over the past fifteen years, this densely populated strip of land has endured four major military operations and countless outbreaks of violence and unrest. In addition, economic hardship and crippling restrictions on the movement of people can make daily life a struggle.

But another, often invisible, danger stalks this vulnerable population. Unexploded Ordnance (UXO) - unexploded bombs, landmines and other ammunition which failed to explode and still poses a lethal risk of detonation. The exact number of UXO littering Gaza is unknown but the risk to communities is real. It's alarming that in the past three years, at least one UXO-related accident has been reported each month in Gaza. Over the past years, specialist teams from the International Committee of the Red Cross (ICRC), the Palestine Red Crescent Society (PRCS) and the Gaza Ministry of Education have been working with communities across Gaza, alerting them to the dangers of UXO and helping them stay safe. So far over 130,000 residents in Gaza have received such awareness sessions.

In cooperation with the PRCS, the ICRC is aiming to increase community-based risk awareness and encourage safer behavior (RASB) through its Mine Risk Education (MRE) activities. One effective way to do this is through art and cultural events. Drama, art and even graffiti have proven to be successful ways of passing important messages to communities. Performance plays have been particularly successful. Organized jointly with PRCS volunteers, a recent play which aimed to raise awareness about the dangers of UXO attracted an audience of 600 people and countless more online thanks to live streaming on both the PRCS and ICRC's platforms.

"The PRCS and ICRC continue to work together to raise awareness about the dangers of UXO in Gaza," said Reham Fathi, a PRCS volunteer. "We found that theatre was one of the best ways to reach people from different backgrounds. The interactivity of a play adds another dimension to our more traditional awareness programmes. It's very rewarding to see the reaction of the audience," she added. In addition, talented PRCS volunteers, in cooperation with Gaza Municipality, created eye-catching graffiti on the walls at a main junction of Gaza City as another way of raising awareness about the threat of UXO. Furthermore, the ICRC and PRCS joined efforts and distributed 2000 colouring books amongst children across the Gaza Strip, helping them to understand the risks of UXO which could possibly be lurking in their playgrounds and gardens.

"The children of Gaza are especially vulnerable to being killed or injured in UXO accidents," said Hisham Abu Al Ajeen, a volunteer from PRCS. "They often mistake unexploded bombs or other ammunition for toys or something they are curious about. By using tools such as colouring books, it is easier for them to understands the dangers of UXO and to be more vigilant to the hazards," he added. Clearing the Gaza Strip of these dangers will take many years, possibly decades. In the meantime, educating people about the risks is crucial. "The PRCS-ICRC awareness sessions in schools are critical" Al Ajeen added. Knowledge and awareness really can save lives."