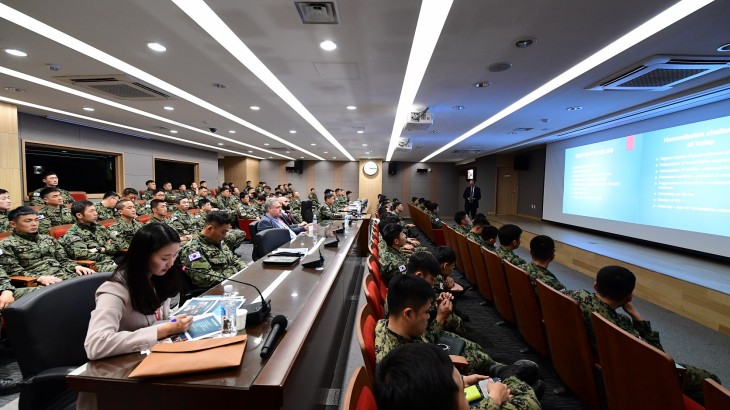 Over 60 special military officers and commanders attended a lecture on Global Humanitarian Activities of ICRC and International Humanitarian Law at Seoul on 10 April. The lecture was part of a series being organized by the Republic of Korea's Special Warfare Command with the International Committee of the Red Cross (ICRC) to improve the understanding of the ICRC activities and the rules of war.

Charles Sabga, head of the ICRC mission in Seoul, former head Georgios Georgantas and the ICRC's armed forces delegate from the regional delegation for East Asia Jean-Jacques Gacond also participated in the event.

"Founded in 1863, the ICRC is one of the oldest humanitarian organizations in the world and operates on the principles of strict neutrality and mutual trust," Georgantas addressed the group.

It is our mission to save those who are exposed to war and violence and to protect human dignity.

Kim Hwi-yeon, an officer in charge of military operations who attended the lecture, said, "The interaction helped me understand how important it is for a soldier to know the rules of war. In case of armed conflict, we have to comply with the international humanitarian law, which consists of rules that protect people and limit the means and methods of war."

The lecture was based on a 2017 Memorandum of Understanding between the Special Warfare Command and the ICRC to promote cooperation between civil affair units, NGOs and international organizations. The series of lectures continued till 10 June.