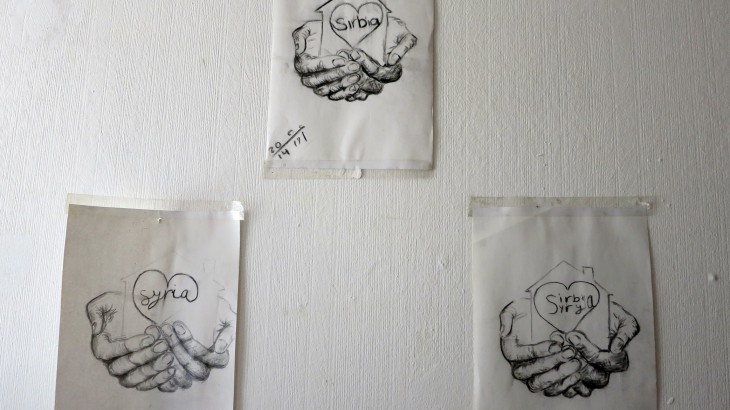 Krnjaca, Serbia. Drawings on the wall of a centre for asylum-seekers. © Serbian Red Cross

Nasri is a 21-year old Syrian from Damascus. "In my group we are four women, six babies and one man," he explains, the one man being him. They fled the fighting in their native land on 1 March 2015, and travelled, mostly on foot, across Turkey, Bulgaria and the Former Yugoslav Republic of Macedonia, reaching Serbia in early June.

The walk from the southern Serbian border to Belgrade took five days, and now Nasri and Bahiya, his 19-year old fiancee from Aleppo, are taking a rest in a centre for asylum-seekers on outskirts of the city before setting off for the decisive part of the journey, to Germany, where his grandma is waiting for them. He keeps in regular contact with the family back in Damascus, thanks to Viber and WhatsApp. Nasri's shining eyes hardly leave Bahiya's face; he simply radiates love. On a quiet, sunny Belgrade day, they enjoy a moment of happiness.

But how will they deal with the smugglers and traffickers who lurk along the way, the police and the relentless administration, or just the arduous 1,500 km still ahead of them? With their love and the humanity of the Red Cross Societies in the countries they will pass through, inshallah.

The centre for asylum-seekers in Krnjaca, on the outskirts of Belgrade, is a unique place. It is a barracks that used to accommodate the workers of a construction company which, in the days of the old Yugoslavia, built waterfronts in many non-aligned countries in Africa and the Middle East, the countries whose nationals are nowadays lodged in these same barracks. During and after the wars of the 1990s in the Balkans, this place became a temporary home to hundreds of refugees and internally displaced persons fleeing violence.

It still houses 170 of them, the most desperate ones, who have been unable to get a home of their own. Refugees and migrants live side by side in harmony, sometimes taking a walk together or exchanging a word or two. Coming from places light-years away, they understand each other perfectly, in the silent communication of shared suffering and compassion.