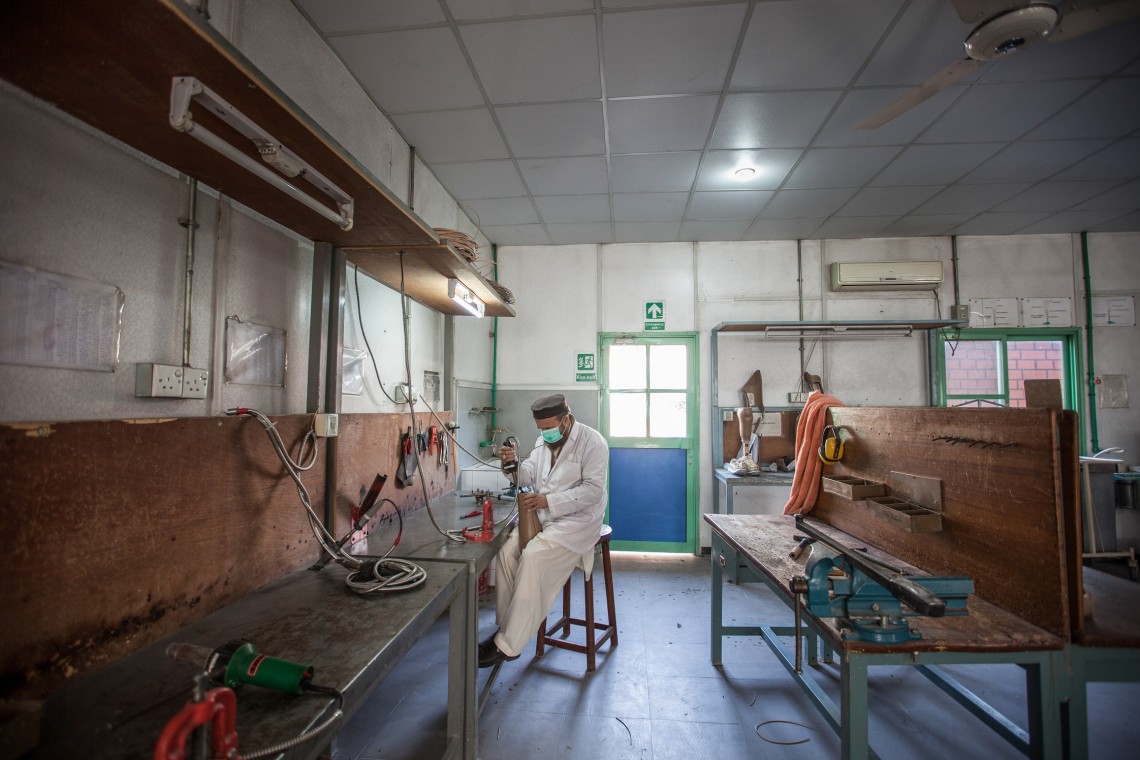 Shaken up: Looking back at the earthquake that changed personal history

There was nothing significantly different about 8 October 2005. It was just another day of running errands, doing chores at home, going to school, writing a test, working the fields, etc. Then the ground began to shake vigorously and structures came crashing down as a massive earthquake measuring 7.6 on the Richter scale hit the Pakistan-administered Kashmir region. It flattened entire villages, caused enormous damage to roads and water systems and became a black day in the personal history of thousands of families. The earthquake killed 73,000 people. Many of those who survived were severely injured, disabled both physically and emotionally.

As the survivors began to piece together the fragments of their lives, the International Committee of the Red Cross (ICRC) stepped in to support the rehabilitation of those who had been disabled through the Muzaffarabad physical rehabilitation centre, which was opened in 2007. Patients were assessed by experts, provided with appropriate prostheses, orthoses or wheelchairs, put through physiotherapy and trained to use their mobility devices for greater independence. Those who needed assistance for earning a livelihood were also given cash grants.

Fourteen years since the earthquake, some of the victims talk about the memories that never leave them, the way back to normalcy and those who held them through the dark days.

Rabia: 'I thought it was Judgement Day'

Rabia was five years old when the earthquake struck. "I was writing a test in school at the time. Everything started shaking. I thought Judgement Day had come because that's what people were saying. They said the sky was going to fall on us so I looked up and just then a wall collapsed on me," she remembers.

Eleven days later, Rabia's right leg had to be amputated. But Rabia's mother was determined to help her daughter overcome whatever life had thrown her way. The following year was spent in getting her treated at Combined Military Hospital in Rawalpindi. When Rabia turned seven, she was introduced to the Chal Foundation. "They helped me in many ways, even in my studies when I decided to take up nursing," she says. And her mother kept pushing her from one step to the other. "She used to carry me to the madrasa and to my school to ensure that I didn't lag behind in any way," she adds.

A young woman now, Rabia reflects her mother's grit and talks about how society treats people with disabilities. She remarks that often it is the people around her who make her more conscious of her disabilities and make a big deal out of it. "For example when someone says I can't play outside, it becomes a disability for me even though actually it is not. We need to treat people with disabilities normally and include them in everything instead of marking boundaries for what they can and cannot do," she concludes.

Eman Batool: A devastated mother gets back her joy

Eman Batool's mother was forced to wait for 15 days before she could see her baby girl who was living with her aunt's family when the earthquake destroyed everything in their village. "All the roads were blocked and there was nothing we could do but wait. Initially, I was only told that Eman, who was three years old at the time, was fine. Finally her uncle told me that a wall had fallen on her and cut her leg," says Eman's mother. The little girl was taken to Karachi for treatment and her leg was amputated. While Eman struggled with pain, her mother was crushed thinking about her daughter's life and that she would never walk again.

Back home, Eman's father made a basic crutch so that his daughter could support herself. Some time later they took her to Abbottabad where she was given a prosthetic limb to stand up and walk. Though it felt stiff it was a good start for Eman. For her devastated mother just seeing her daughter stand up again brought back joy.

Two years later in 2007, Eman was brought to the ICRC's physical rehabilitation centre in Muzaffarabad. Her prosthetic was replaced with a better one and a physiotherapist worked with her on special exercises to help her walk properly. "The staff were very nice and more helpful than I could have imagined. They really helped me get back on my feet," she says. Eleven years later, Eman is full of confidence and is passionate about helping others. She dreams of becoming a cardiologist in some years.

"The doctor who operated on me had said that my heart and mind would be at war with each other for a year. My heart will say that I am fine, but my mind will tell me there is something wrong with me. The doctor was right," says Abid Ali.

The devastation unleashed by the earthquake had shaken him up and caused deep trauma. "I kept having nightmares and could not find any reason for happiness so I sought treatment for trauma," he shares. One day on his way back from the hospital, an oncoming car rammed his vehicle and crushed Abid's right arm which was resting on the window. "I could see my bones," he says.

Abid was taken to Pindi where the doctors amputated his arm. Lying on the hospital bed, Abid determined not to let his situation get him down. "I had always enjoyed reading and writing. So the day after my amputation I asked for a paper and pen and started writing with my left hand. Now I can write even better with it than I ever did with my right hand," he says.

At the hospital his cousin told him about the ICRC and that it helped people like him. "Just hearing about them took away half my worries," he says. Abid is now able to write as well as type with ease and has been working in a clerical position for sometime. It is his dream to achieve things just like others do.

Muhammad Idrees: Life getting back on track

In October 2005, Muhammad Idrees was eagerly marking the final countdown to his wedding date. "It was the month of Ramadan and on that particular day I was going to see my father who was working in the fields. That is when the earthquake struck. I saw my father fall down and started running towards him. There was a landslide and we were both hit by the rolling rocks," he shares. Muhammad was injured severely while his father died on the spot.

Scared and shocked, Muhammad thought he was also going to die but an uncle came to his rescue.

I was still conscious when we got to the hospital. The doctor told me that they would have to amputate my leg. I trusted their judgement.

After two weeks, though the physical and emotional wounds were still fresh, Muhammad got married. Slowly life began to move on but he did not have a job so he started selling fruit by the roadside. That is when he was spotted by a staff of the ICRC's physical rehabilitation centre. "The person told me that I could get a new leg and that the ICRC will also help me with a cash grant to make a decent living. I couldn't believe what I heard. I didn't even know things like prosthetics existed," he exclaims.

At the rehabilitation centre in Muzaffarabad, Muhammad was fitted with a prosthetic and trained to walk again. "I was amazed by the treatment I was given at the centre. The staff kept looking out for me. And it was all free of cost," he says. Muhammad used the cash grant to buy a rickshaw which eventually helped him to purchase a piece of land and a house. Now a father of three children, Muhammad looks forward to stoking their dreams. "My oldest one is in class five and wants to join the army," he says fondly.

Class monitor Khursheed Ahmed was collecting his classmates' exercise copies when the ground began shaking violently. "I could only manage moving about five feet away towards the door before the ceiling fell. My hands were crushed and my legs were trapped under the debris. While I lay there crying out in a weak voice my father came searching for me. He recognized my voice and pulled me out," recalls Khursheed, who was ten years old at the time.

He was flown to Islamabad and his arm was amputated. A year later he returned to school with one shirtsleeve dangling limp. For five years Khursheed managed just like that. "I used to feel odd when I looked at myself in the mirror. It just didn't feel right without my arm," he says. Then an uncle who had a friend working with the ICRC told him that he could get a new arm and Khursheed's story changed. "Now, I often forget that I lost the arm at all," he exclaims.

Babar Mughal: 'I try to live like everyone else'

Babar Mughal was trapped under the rubble of his collapsed school for two days after the earthquake shook up everything. Four of his classmates were crushed to death in the disaster and Babar's parents thought that their son may also have been killed. They made their way through ripped roads and debris to the flattened school site and found that their six-year-old had held up, waiting for rescuers to find him. But his leg was severely injured and had lost blood circulation. They were told that the only solution was to amputate the leg so they went ahead with it. "A year later we got to know that my leg could have been treated without amputation too," he says wistfully.

Babar walked on crutches for two years. In 2007, he came to the ICRC's physical rehabilitation centre and was given his first prosthetic limb. Babar began walking again with slow and steady steps. "Now I never take the prosthetic off. I try to live a normal life like anyone else. The rehabilitation centre's staff are so good at their work so I don't feel pain anymore," he says. Babar visits the centre once a year for a review and to switch the prosthetic. At other times he is focused on his aim to get into university and to finally become a company secretary.

Nasreen was 19 years old and looking forward to getting married when the earthquake hit Muzaffarabad. She was at home doing chores when the house collapsed on her and she passed out. When she came back to her senses she could not move her legs anymore. The doctors told Nasreen that her spinal cord was injured and she would never walk. "Our village did not have any hospitals or facilities for getting physiotherapy. It was very difficult to recover from what happened to me because I had to do it on my own," she says.

Spurred by pure survival instinct, Nasreen got herself a wheelchair and trained herself in using it to get around. One day when she visited the city to get her wheelchair fixed she met with doctors who told her about prosthetic legs and supports. They also told her something she had never expected to hear again – that with practice, she may even be able to walk.

Now as she is helped to stand on her feet after more than a decade, a mix of emotions overwhelm her. "I'm so nervous and excited too," she says. Her physiotherapist hopes to have her walking within the next six or seven months depending on how the therapy progresses.