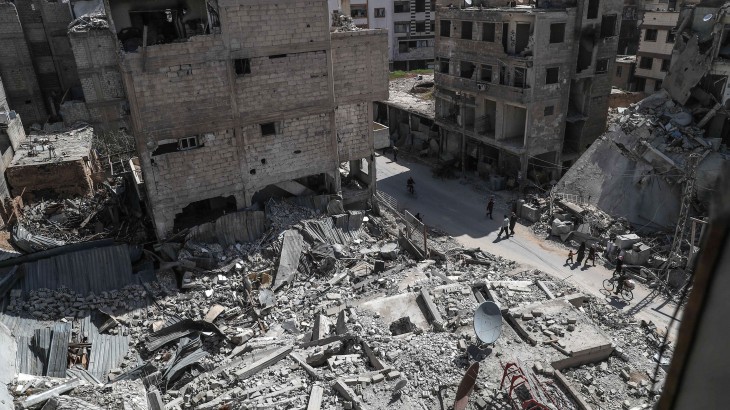 My visit to Syria this week reinforces my view that wars across the region have reached a frightening new normal. Tit-for-tat battles of retribution increase in intensity with no regard for their devastating impact on civilians.

The level of suffering in Eastern Ghouta is the latest example, joining Afrin and Mosul, Sana'a and Taiz. Too often destruction seems to be the goal as the basic standards of humanity are ignored.

This week, the Syrian crisis entered its eighth year. How long will the powers behind the fighting allow it to drag on? They must know already that a war of vengeance is a war without end, one in which everybody loses.

When I last visited 10 months ago there were signs of hope. Rehabilitation and returns were possible. Today, though, the situation has further degraded. What hope is there for children who have seen families destroyed and atrocities committed?

What hope for the young boy I met in the displacement camp who hasn't attended school for years?

Syria is a conflict characterized by regular breaches of international humanitarian law: the way sieges are conducted, disproportionate attacks in urban areas, and the targeting of civilians and civilian services like ambulances, water stations and markets.

These are tactics not only in Syria but across the region: a geo-political game played with human lives. Over the last weeks I have travelled across the Middle East, to witness the human costs of indiscriminate warfare.

The people I have met are exhausted - exhausted from bombs and rockets dropping on civilian neighborhoods. Exhausted from not knowing details about missing or detained family members.

I am myself with many humanitarian workers on the ground both exhausted and fed up with the blind justification of gross violations against civilians. Human lives have the same value: the same in Ghouta as in Damascus, in Aleppo as in Mosul, in Syria as in Yemen. The suffering is exacerbated by a situation, in which humanitarian workers are not allowed to do their jobs. Aid is not a political football and must not be part of the political process.

These three crucial issues - humanitarian access, the protection of civilians, and humane treatment of detainees - are not in the category of "nice to have," they are both a moral and legal obligation.

Syria is the ICRC's largest and most complex operation in the world. Our years of experience here give us a solid understanding of what civilians need. As long as rockets continue to fall on Eastern Ghouta and Damascus, as fighting continues in Afrin, as millions remain displaced, the ICRC is calling for:

• Respect of the Geneva Conventions and respect for civilians and civilian infrastructure
• Unhindered, cross-line access that allows humanitarian aid to reach affected populations without exception
• Access to those held in detention to monitor conditions for humane treatment
• Anyone selling weapons that could be used in violation of international humanitarian law to stop such sales. The responsibility for lawful battlefield behavior lies with fighters and commanders; but those who provide arms also bear responsibility.
• On returns and migration - people should return home only if the security situation is stable and only if they choose to do so.

Over that seven years the Syrian conflict has extracted a huge toll: