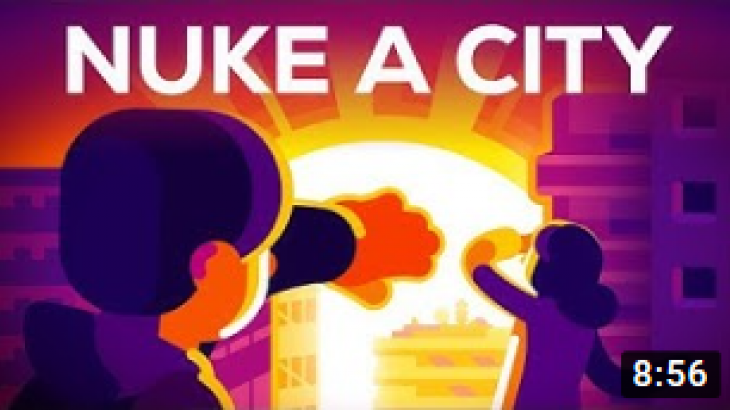 What If We Nuke A City? ICRC/Kurzgesagt

Geneva (ICRC) – A nuclear bomb hasn’t been detonated in war in nearly 75 years, but increasing international tensions and 6 million views on a week-old video show how relevant the issue remains.

The video, “What if we nuke a city?” is a collaboration between the International Committee of the Red Cross (ICRC) and ‘Kurzgesagt-In a nutshell’, a Munich-based animation studio whose YouTube channel focuses on scientific, technological, political, and philosophical issues.

“The fact that millions of people have watched this video in the very short time since its release shows that people care about this issue, and people should care about the menace nuclear weapons pose,” said Enrique Mestre, lead for the ICRC’s Nuclear Weapon Ban campaign. “Seventy-four years after the bombings of the Japanese cities of Hiroshima and Nagasaki, the risk that nuclear weapons will be used again is growing. We at the ICRC think this video, released on Oct. 13, will change minds about the importance of confronting the threat of nuclear weapons.”

The video lays out the shocking facts about what would happen if a nuclear weapon were to explode in a modern city: millions of people would be affected and no one would be able to bring meaningful relief to victims and survivors. No one – no country, no medical team, no aid organization – is capable of responding adequately to a nuclear blast.

“A nuclear explosion in a modern city would cause devastation on a nearly unimaginable scale. Everyone in its path would suffer” said Magnus Løvold, Policy Adviser in the Arms Unit of the ICRC. “But this video shows not only the fundamental inhumanity of nuclear weapons. It also shows that there’s a way to put a stop to these weapons by prohibiting and eliminating them.”

The ICRC and the Red Cross and Red Crescent Movement have long called for the prohibition and elimination of nuclear weapons. We see the 2017 Treaty on the Prohibition of Nuclear Weapons (TPNW) as an indispensable step towards achieving these goals, so we call on all States to join it without delay. The TPNW is the first globally applicable treaty to ban/prohibit nuclear weapons outright.  It passed in July 2017 and will come into effect after 50 States have ratified it. So far 33 States have ratified it.

We invite the public to watch the video on YouTube and learn more about the issue and what they can do about it (www.notonukes.org).