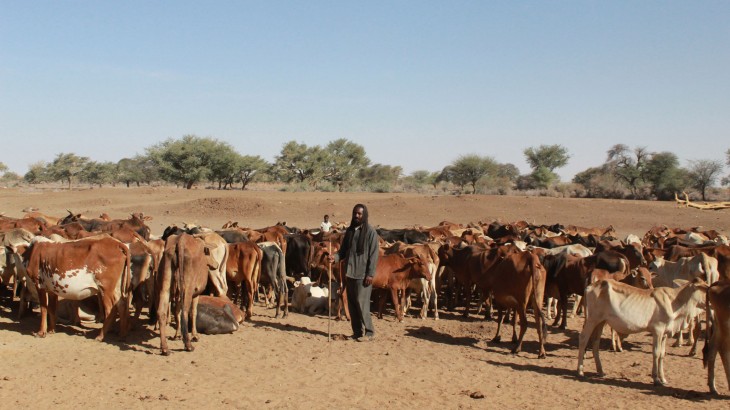 Musa, a cattle owner in Darfur, stands with his animals during a vaccination exercise in Sudan. CC BY-NC-ND / ICRC / Shiemaa Ahmed

Musa, was one of the scores of livestock owners who brought their cattle to the vaccination centre in Wadaa in North Darfur, to be vaccinated during a vaccination programme organized by the ICRC. It was unusual that he accompanied them to the vaccination site, rather than send one of his shepherds to do so. Armed with a stick which he controlled the animals, and a head covering to shield him from the searing heat, Musa arrived at the site visibly excited at the prospect of finally having all his animals immunized.

I had lost 82 cows before the ICRC vaccination exercise came to our rescue...

Musa took advantage of the vaccination programme jointly undertaken by the ICRC and the Sudanese Ministry of Animal Resources which aims at vaccinating livestock against common diseases. The programme, which is a relaunch following the last one held in 2013, will be undertaken continuously until 2021 and is aimed at vaccinating 300,000 animals in North Darfur, 200,000 in Central Darfur, 100,000 in South Darfur, and 100,000 in West Kordofan. In addition to vaccinations, the ICRC and the Ministry are providing agricultural extension training to 100 veterinary technicians from North Darfur, Central Darfur, South Darfur, South Kordofan and Blue Nile States.

Speaking about his experience during period when there was no vaccination activity, Musa lamented that other livestock owners and he had to contend with a high mortality rate among their livestock, despite often coming together through cooperative arrangements to buy vaccines in Al Fashir. Even with that, he went on, they lacked the technical expertise to administer the vaccine on their animals.

"In one year alone, disease took 82 of my cattle," he said with a somewhat dejected look on his face.

The restart of the livestock vaccination programme by the ICRC has brought smiles back to the faces of many animal owners like Musa, who had managed against all odds to keep their livestock alive and well in the three years that the ICRC was not operational in the area. Musa assured our team that he will keep bringing his animals to be vaccinated over the next three years that the programme will last and believes that the immunization will prevent them from being afflicted by any disease from now on.