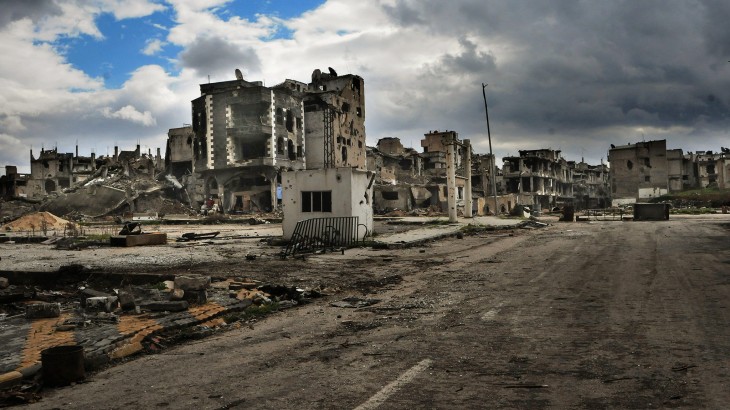 The figures for 2014 speak volumes about the plight of Syrians and the consequent demands placed on humanitarian organizations like the ICRC.

With no end to the current crisis in sight, the extreme hardship endured by millions of ordinary people in Syria and throughout the region will only grow more acute in 2015. Current figures suggest that almost a third of Syria's pre-war population of 22 million is living in besieged areas or has sought refuge elsewhere in the country. More than three million other Syrians have fled to neighbouring countries or further afield.

2014 was therefore a hugely challenging year for the ICRC delegation in Syria, with poor security being another major concern. Aid deliveries often had to be delayed or postponed. The ICRC pursued frank and open discussions with the authorities and other parties to the conflict on a regular basis in order to obtain security guarantees for the safe delivery of humanitarian aid. Despite the constraints and concerns, Syrian Arab Red Crescent (SARC) staff and volunteers – with ICRC support – provided food and household essentials each month to half a million vulnerable individuals across the country, more than at any time since the conflict began nearly four years ago.

Just back from Syria, the ICRC's former head of delegation in Damascus Boris Michel describes the growing needs of the population.

"We welcome the fact that the SARC and ICRC have better access to those in need, including across front lines," said Boris Michel, the outgoing head of the ICRC delegation in Syria. But although access to the worst-affected areas had improved, the positive impact was outweighed by the sheer breadth and scale of people's needs: "We must be allowed to do much more. Civilians and others taking no part in the fighting are entitled to essential supplies and services, such as health care and water, at all times. The wounded and sick must be granted safe and timely access to medical care – it's often a matter of life or death for those injured in the fighting or who are chronically ill."

In 2014 local water authorities working with SARC and ICRC engineers restored and maintained water supplies to 15 million people in both urban and rural areas. ICRC staff also visited detainees in places of detention and acted as a neutral intermediary in local reconciliation efforts. Training and financial support were provided to SARC volunteers and staff to help them step up their humanitarian activities.

Tragically, 40 SARC and seven Palestine Red Crescent volunteers have lost their lives while on duty since the start of the conflict. Three ICRC staff members kidnapped in 2013 are still being held. "The targeting, by whatever means, of aid workers carrying out their humanitarian work is deplorable, and should never happen," said Mr Michel.

The ICRC has some 300 staff working in Damascus, Tartous and Aleppo. There are plans to open additional offices in the north and south of the country in 2015 to reach out more effectively to vulnerable communities and individuals in hard-to-access areas and across front lines.

"The ICRC's neutral, independent and impartial work is the foundation for building trust with all sides and ensuring our presence is accepted where it's needed most," explained Mr Michel. "Given our principled approach, we must be allowed to do more to relieve people's suffering and meet their growing needs in the coming months."