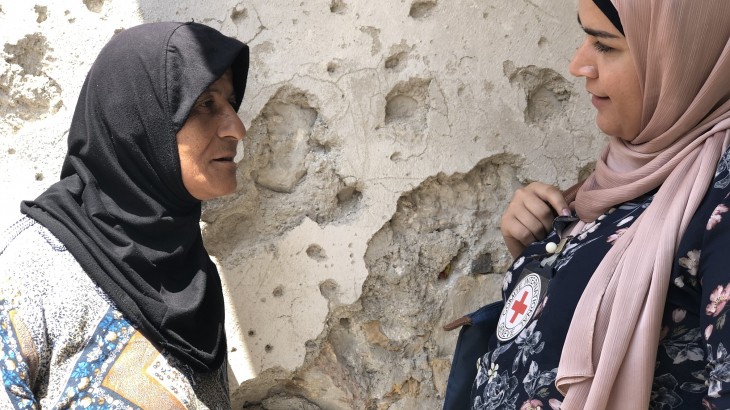 Geneva (ICRC) – Attacks on civilians and civilian infrastructure in northwest Syria have spiked in the first weeks of 2020, killing scores of people and forcing more than 150,000 to flee their homes in January alone.

The violence in the city of Aleppo has reached an intensity not seen there since 2016, with shelling affecting several neighbourhoods. In rural western Aleppo and across Idlib governate, meanwhile, fierce fighting is resulting in increased levels of suffering for families there.

“We have seen continuous bombing and shelling the past few days in Aleppo city. In Idlib and rural western Aleppo, fighting has been ongoing for months. If basic precautions are not taken, the number of casualties will rise higher. We will be left with severely traumatized survivors and services weakened to the level of near-total collapse,” said Lorenzo Redalié, head of ICRC’s Aleppo office.

The ICRC is renewing its call to parties fighting on the ground: Do not target civilians nor civilian infrastructure. Respect and protect medical staff, ambulances and their facilities, which care for the wounded and sick. Respect and protect those not participating in the fighting, in particular, children, women, and the elderly. Allow humanitarians to do their work to assist those who remain trapped in the fighting. Failure to abide by the rules of war has disastrous humanitarian consequences that can last for years.

The rules of war are designed to protect people who do not take part in hostilities and to safeguard the infrastructure that is vital for their continued survival and eventual rebuilding of their life after the end of hostilities.

The ICRC together with the Syrian Arab Red Crescent (SARC) reiterate their readiness to increase their humanitarian response, on both sides of the frontline, to assist people affected by the ongoing fighting in northwest Syria.

The situation is intensifying in #Idlib, western rural Aleppo & #Aleppo city.
According to reports, more than 150,000 people were forced to flee in January alone.
Our colleague Lorenzo is speaking about the situation from Aleppo city, only a few kilometers from the front line pic.twitter.com/d77DsfuJtW

(To arrange for an interview with ICRC head of office in Aleppo, Lorenzo Redalié, please contact Ingy Sedky)