Taking steps to better ensure the protection of civilians in Syria

Brussels Conference on Syria – Panel discussion with Robert Mardini, regional director for the Near and Middle East 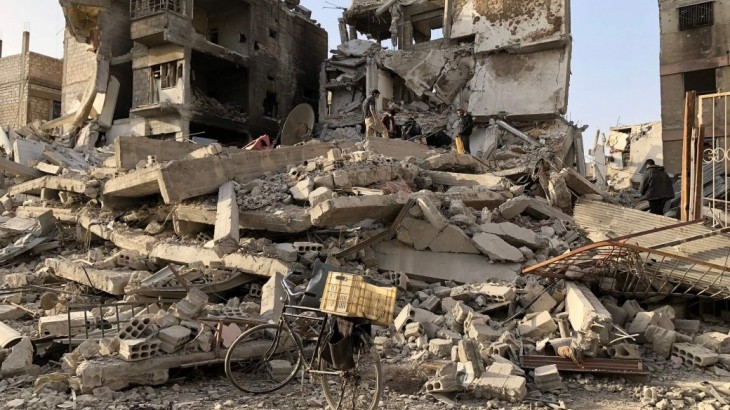 What steps could be taken to better ensure the protection of civilians in Syria is a critical question, and it's at the centre of all the humanitarian questions facing Syria today.

I can give you only the ICRC perspective. And that perspective is based on living and working in this conflict for the past seven years. The protection issues are vast; the working environment is difficult, and often dangerous. We see two main elements when trying to answer the question: what steps can be taken to protect civilians in Syria today?

Firstly, it's absolutely critical that there's greater and more systematic respect for International Humanitarian Law (or IHL). Not only by parties to the conflict – but also by their sponsors Secondly, and linked to this, is that there needs to be dramatically increased protection access for impartial organisations and agencies on the ground – like the ICRC. Let me take these two elements, separately.

The issue of IHL – or rather the widespread disregard for IHL – is at the heart of this conflict. The countless numbers of States, armed groups, proxies, advisers, warlords and so on, has led to an incredibly complex battlefield.This has resulted in a diffusion of responsibility which has blurred the line between truth and falsehood. Who is responsible for what? Battlefield actions are denied, responsibility confused. And this has helped to facilitate violations of IHL: Hospitals and health facilities bombed. Aid workers killed. Schools, electricity and water infrastructure destroyed. Thousands gone missing. People and groups demonized. Families displaced multiple times: and the list goes on.

Civilians in Syria have become the primary object of attack rather than the primary object of protection. It's like the world – and normative values – have been turned upside down. Sometimes, I feel like it's become not a fight for the moral high ground but, rather, a fight for the moral low ground. A scramble for the gutter. What we call 'IHL exceptionalism' at the ICRC has actually become the rule.

But let's be clear. There are no exceptions in war. International Humanitarian Law is non-negotiable. States supporting parties to the conflict - and states of influence - have a moral and a legal responsibility to ensure respect for it. They've a legal and moral responsibility to protect the vulnerable, the injured, the displaced, and the detained. In concrete terms, this means that states supporting parties (states and armed groups) to the conflict in Syria must, for instance:

There is a total of 10 recommendations that the ICRC has shared with parties to the conflict and states of influence, and offered its support and expertise to make them work on the ground. Put simply, there should be no support to warring sides if they do not respect the laws of war. No support without compliance. A simple condition that can save lives.

So what to do in this environment, in terms of protection? Well the first and foremost action is that those in power, those responsible, need to change their behaviour. They need to examine their consciences. They need to issue orders. They need to say to themselves that 'enough is enough' and it is time to do all they can to protect civilians and fighters no longer involved in the conflict. They need to respect IHL. At the end of the day, whatever we do as humanitarians, we will not compensate for the lack of respect for IHL. States need to provide for the displaced; help find the missing; detain with dignity; protect schools, health facilities and workers; counter sexual violence; deal with weapon contamination. Political processes should be more inclusive. Keeping key warring parties outside negotiations gives them no incentive to respect IHL. They become "spoilers" with a license to disrupt, processes that promote PoC in order to illustrate their failures.

And this brings me to my second point. The critically important aspect of access. Access to IDPs. Access to camps. Access to detainees. Access to besieged areas. Too often, humanitarian access in Syria is being used by parties to the conflict as a commodity in political transaction or negotiations. This must stop.

Access not only means delivering much needed assistance but also directly engaging with parties to prevent IHL violations and abuses. I have to say that, for the ICRC, access has gradually improved in many areas. In 2017, the ICRC conducted 716 field visits to different governorates across Syria. This is positive. But not enough.

This is the one key area where a significant change (giving more access) could really make a huge difference to so many people. But quick fixes and one-off aid distributions are not sufficient. Irregular access exposes people to lack of nutrition, water and adequate medical care. Irregular access makes the protection needs of the population even more acute. So what is needed is regular and unfettered access.

Access is also made more difficult by the multiplicity of actors, the diffusion of responsibility. The result is: deliberate interference, stalling tactics and delays at checkpoints, as well as restrictions imposed by the parties to the conflict.

In conclusion, and in answer to the original question, three things need to happen to improve the protection of the civilian population:

The ICRC is here to engage all sides, and to help where it can. Thank you.