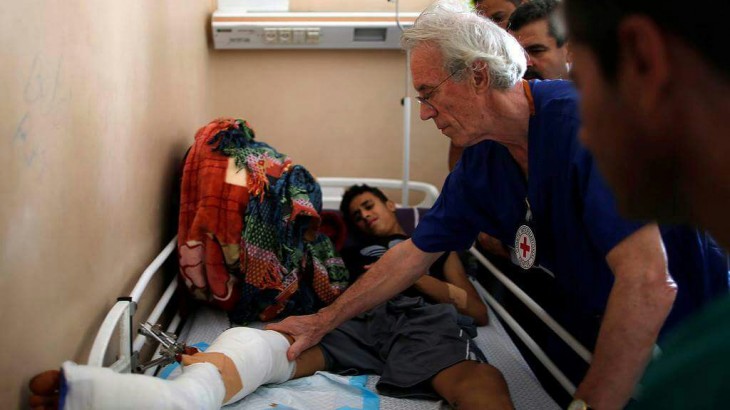 "The quickest way for a patient to die in trauma surgery is from a bleeding artery, because the blood is being pumped out of the artery at high pressure."

John Wolfe knows full well that every second counts when an artery is ruptured. For more than 30 years, he has plied his trade as a vascular surgeon at London's St Mary's hospital, building a reputation as a world leader in his field.

He could have settled into retirement. Instead, he answered a call from the ICRC asking him to pass on his expertise in arterial surgery to surgeons in Gaza.

"With the heavy loss of life in the 2014 conflict, I think the ICRC felt that a lot of that was due to bleeding, and with greater expertise some of it may have been prevented," said Wolfe.

For the last three years, Wolfe has been undertaking short missions to Gaza to train local surgeons in the specialist skills required for arterial surgery, with a focus on trauma patients.

The turbulent landscape means violence and severe injuries are never far away. With only a dozen specialised vascular surgeons serving two million people, there was a clear need for greater expertise.

"First you deal with the artery by blocking it. Once you've blocked it and prevented the bleeding then you have to repair it so the patient doesn't lose their leg. This is the problem in Gaza. Most of the bullet wounds are in the leg, around the knee. If you don't repair the artery then there's a high chance the patient will require amputation."

Around 30 Palestinian surgeons participate in the training each year. The workshops take place in a hotel suite, temporarily transformed into a medical classroom.

Wolfe demonstrates procedures via a big screen and the surgeons then carry out the exercise themselves, practising on goat arteries.

"We get the goat arteries from an abattoir, they're very similar to human arteries," said Wolfe, who carries out the trainings with the help of several local surgeons.

"The whole process is designed to give surgeons the skills they need so they require less help from outsiders. A lot of them are quite experienced surgeons, and therefore to be told you're not doing something right can be difficult to swallow.

"But they certainly seem to enjoy the workshops and I think they come away with a much better insight into what's required in vascular surgery."

Over the course of three years, assessments suggest those surgeons undertaking the course make good progress. Wolfe also believes the process of dealing with an emergency situation has improved.

"There was one time when we got 12 ambulances in four minutes, all carrying people with serious fractures and torn blood vessels in their legs," said Wolfe.

"That caseload would overwhelm any hospital system, they aren't set up for that volume in such a short space of time.

"But their triage of those patients was excellent and they managed admirably. [The triage] was also excellent in the field, so those with minor injuries didn't come to the hospital, and they put tourniquets on legs that needed them to make sure the patient can survive." 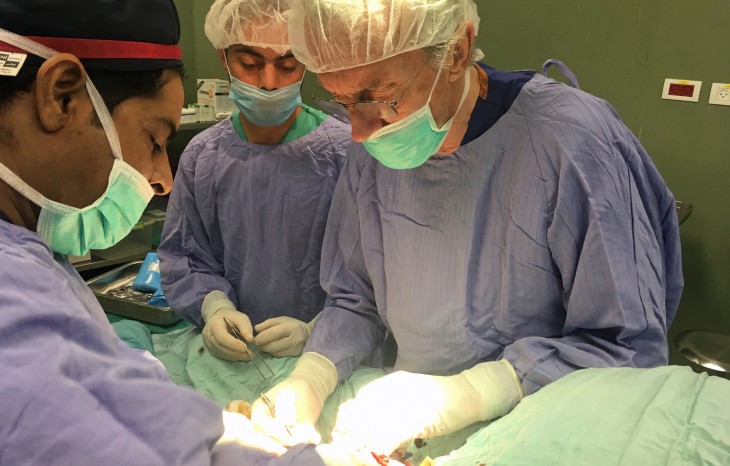 "You could be in the operating theatre and the light will go out," said Wolfe. "They also lack certain resources. A lot of the time you don't have cautery*, which is the easiest way of stopping bleeding from small vessels when operating, but you need an electric current.

"They don't have a large number of sutures, the needle and thread that you use to sew up arteries. So you have to make do with what you have available.

Wolfe is due to return to Gaza this year, along with another British surgeon who will head up the training programme.

Through his endeavours, 60 surgeons have received clinical training on managing vascular injuries in the last three years.

"It is very satisfying to feel that people have learnt new skills and ways of dealing with situations because of what you've taught," he added.

"It's frustrating that you can't do more and you can't be more effective in a short space of time, but one just has to accept that."

*Cautery is a medical practice that involves burning, searing or destroying tissue as a means of mitigating bleeding.