Ukraine: 20 years since Ottawa, much remains to be done 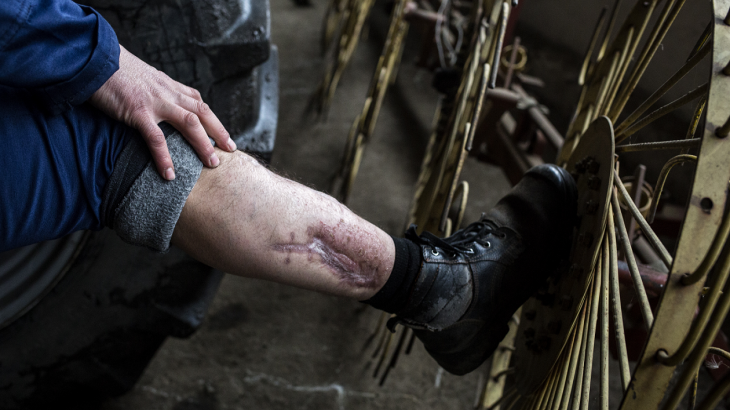 A man in eastern Ukraine shows his leg injured due to stepping on UXO. CC BY-NC-ND / ICRC/ A. Vlasova

Kyiv (ICRC) – Twenty years have passed since the adoption in Ottawa, Canada of the Convention on the Prohibition of the Use, Stockpiling, Production and Transfer of Anti-Personnel Mines and on their Destruction, commonly known as the Anti-Personnel Mine Ban Convention. This historic treaty, adopted on the basis of international humanitarian law, marked the first time that States agreed to completely ban the killers that anti-personnel landmines are. Since then there has been tangible progress, but the need to close the remaining gaps in its implementation remains strong. As of December 2017, 162 States, including Ukraine, are party to the treaty, while 34 remain non-signatories.

Twenty years ago, the International Committee of the Red Cross (ICRC) estimated that approximately 20,000 people, mainly civilians, were maimed or killed each year due to anti-personnel landmines. That number has gone down drastically since the treaty entered into force in 1999, and is today estimated to be around 6,500.

“We must aim for complete universality, getting those States which have not yet ratified the treaty to do so without delay. In addition, a number of States Parties still have obligations under the Convention to clear anti-personnel mines from their territories, while others need to ensure improved access to services for mine victims,” said Alain Aeschlimann, head of the ICRC’s delegation in Ukraine.

The role of the ICRC, with its distinct mandate and presence on the front lines in most of the mine-affected countries worldwide, including Ukraine, is to focus on reminding the authorities of their obligations, helping the victims, educating people on related risks and working with partners specialized in mine clearance. The ICRC also aims to work more on providing assistance for people and communities victimized by landmines in countries that were already struggling to meet their needs.

In autumn 2017, the ICRC conducted a survey on the knowledge, attitudes and practices of residents in more than 100 settlements on the government-controlled side of the line of contact in eastern Ukraine; a total of 2,374 respondents were interviewed. The results show that two-thirds of the people who live in the countryside and about half of city dwellers have encountered some personal security problems as a result of the conflict, with shelling being the main problem. Many have been forced to leave their homes for a certain period of time in order to reduce risks.

The presence of mines in the area often impedes everyday activities, particularly in rural areas, such as travel by road, herding animals, working in the fields, farming and collecting firewood. Crossing checkpoints on the line of contact is among the major security issues brought up in the survey; more than half of the rural population and more than a third of the townspeople know that mines can be located near the checkpoints, which is one of the factors causing serious concern among those crossing. Another finding shows that, since the conflict erupted, most residents of the territories along the line of contact (as many as 87 per cent, depending on the type of settlement) have arranged shelter in case of shelling.

“The consequences in humanitarian terms of landmines and other explosive ordnance in Ukraine are dramatic and have to be addressed,” stressed Mr Aeschlimann. “Civilians living on both sides of the line of contact in eastern Ukraine continue to be affected by mines and other explosive remnants of war on a daily basis. Some are killed or seriously injured, others lose their livelihoods. This has to stop.”