Ukraine: Another winter on the frontline 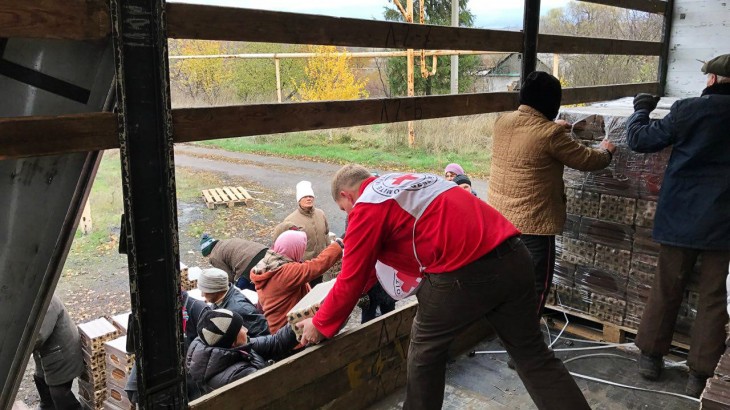 Kyiv (ICRC) – With cold weather approaching, the International Committee of the Red Cross (ICRC) has increased its assistance to people still badly affected by the armed conflict in eastern Ukraine. On both sides of the contact line, ICRC teams are visiting vulnerable communities, distributing goods or cash, repairing homes, and working to improve the living conditions of the most vulnerable Donbas residents.

"If you live by the contact line, this coming winter is the fourth cold season where you pay a double price: you are exposed to shelling and you must endure freezing temperatures," says Alain Aeschlimann, head of the ICRC delegation in Ukraine. "Damage to a pipe can sever your connection to household heat with temperatures plunging to 20 degrees below zero. This just cannot be the new normal".

In some communities close to the contact line, the situation has progressively worsened in recent years, often due to disruptions of gas or water supplies. In June last year, for example, the ICRC completed reparations to a 3-km gas pipeline in Marinka, which had been damaged in the summer of 2014. However, due to the continuing hostilities, operators cannot access the gas station and the pipeline is still not being used, hence keeping more than 15,000 residents of Marinka and Krasnohorivka without a gas supply. In other places, the local population is feeling the effects of increasing gas and electricity prices.

In villages and towns in the conflict zone, many houses are still damaged or destroyed, yet some people continue to live there. Since 2014, the ICRC has been making homes watertight and windproof by replacing windows and repairing minor damage on hundreds of private houses along the contact line, including in Marinka, Krasnohorivka and Lebedynske. The installation of PVC windows, for example, is one of the key elements for keeping houses warm in cold winter months. In October 2017 alone, more than 3,000 residents of the Donbas received mineral wool, tarpaulin, foam, sheeting and tape – materials used to insulate attics and roofs of private homes.

Some of the most vulnerable residents of the areas suffering from the hostilities also receive cash assistance, the aim of which is to ensure that they are able to pay their fuel, wood, gas and electricity bills during the winter period. Wood briquettes or coal is provided so that families and social institutions be able to maintain appropriate temperature conditions in their houses, and to ensure that farmers may heat their greenhouses and continue their planting activities. The ICRC has also been providing animal feed to let local population restore and develop their livelihood practices both during and beyond winter season.

Apart from households, the ICRC has recently also supported public institutions such as the Institute of Emergency and Reconstructive Surgery in Donetsk, which received heating radiators and air-conditioning units in early October.

A decrepit and fragile catwalk in Stanitsa Luhanska remains the only functioning crossing point between government and non-government controlled areas of the Luhansk Region. In October this year, an estimated 8,000 people crossed the bridge every day. The wait can take hours. In addition to the heating points established earlier by the ICRC on both sides, a first aid station recently opened on the government-controlled side and is now treating up to 20 patients per day. Work is underway to extend the existing heating point on the non-government controlled side, so that more people can have a much-needed respite while waiting to cross the bridge. In Horlivka, another crossing point used by thousands on a daily basis, the ICRC is now completing a container-type heating point, with the view of improving basic services for people queuing to cross.

The ICRC, a neutral, impartial and independent humanitarian organization whose mission is to protect the lives and dignity of victims of armed conflict and to provide them with assistance, currently has close to 500 staff in Ukraine, with offices in Kyiv, Odesa, Mariupol, Sloviansk, Sieverodonetsk, Donetsk and Luhansk.