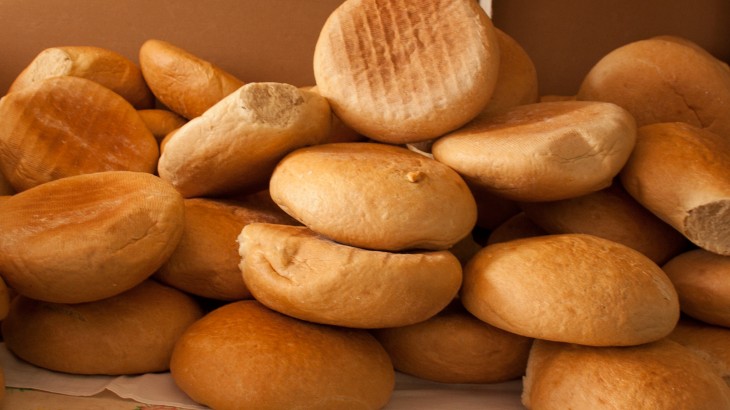 Lubov Vasilievna fled her home town of Pervomaisk for the safety of Severodonetsk. Now she is part of a Red Cross team distributing bread to others who, like her, have had to leave their homes to escape the fighting in eastern Ukraine.

A year ago, Lubov Vasilievna would never have dreamt that within months she would be helping to distribute bread with the Red Cross in Severodonetsk, far from her home town of Pervomaisk. But that is the uncertainty of life today in a region where intense fighting has killed some 6,000 people and displaced more than a million others since early 2014.

"I didn't think I'd ever come to Severodonetsk," Lubov explains with a soft smile as she ticks off beneficiaries' names on the long list in front of her. In earlier times, Severodonetsk was known only for its chemical plant. Now it is the administrative capital of Lugansk region. Last October, Lubov took refuge there with her daughter and grand-daughter, when shelling in her home town made it too dangerous to stay. 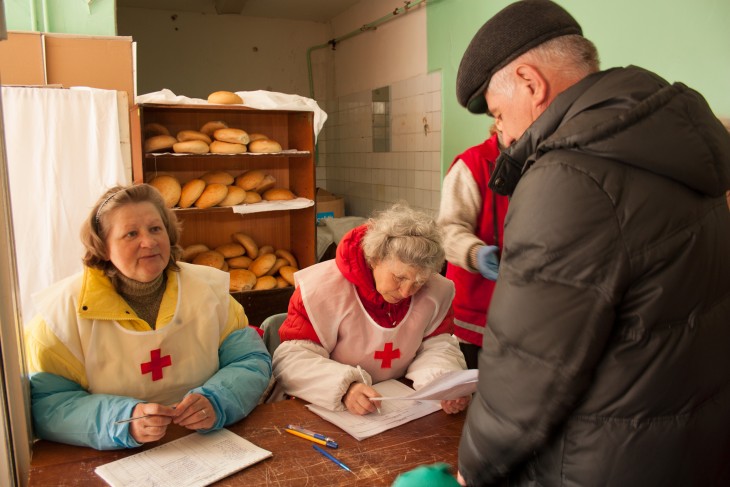 "We became frightened," she says, breaking off from her task to talk to visitors who had come to see the bread distribution. "My mother came with us, and we've been benefiting from this programme for six months now."

But Lubov wanted to do more than simply receive aid, so she joined the Red Cross as a volunteer. Now, in addition to receiving bread, she also organizes its distribution, together with other volunteers. The work is unpaid, but that is beside the point. Lubov is helping out of kindness. And as she also points out, "If you help others, they'll help you." 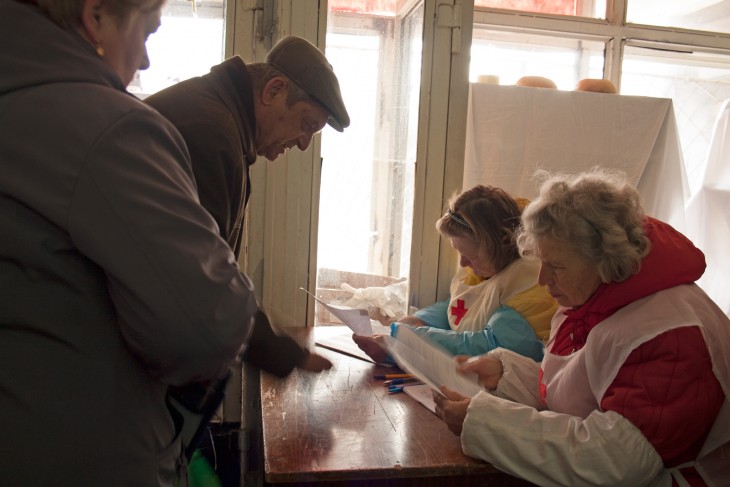 Severodonetsk, Ukraine, 17 April 2015. Lubov and another volunteer check the list of people who are to receive bread. CC BY-NC-ND / ICRC / J. Barry

The bread programme is run by the Ukrainian Red Cross, with support from the ICRC, and started last October almost by chance.

"We had a huge amount of surplus flour and decided to ask a local bakery to make bread for displaced families," explains Gagik Isajanyan, the delegate in charge of the programme at the ICRC's office in Severodonetsk. "It took us a while to set it all up, with our Ukrainian Red Cross partners, but we managed to overcome all the logistical challenges."

The programme was an instant success, and as the number of displaced people arriving in Severodonetsk rose over the winter, so too did the number of people receiving bread, doubling from around 300 to more than 600 a day. Two additional distribution points opened in nearby Lysychansk and Rubizhne, bringing the total number to around 4,400. 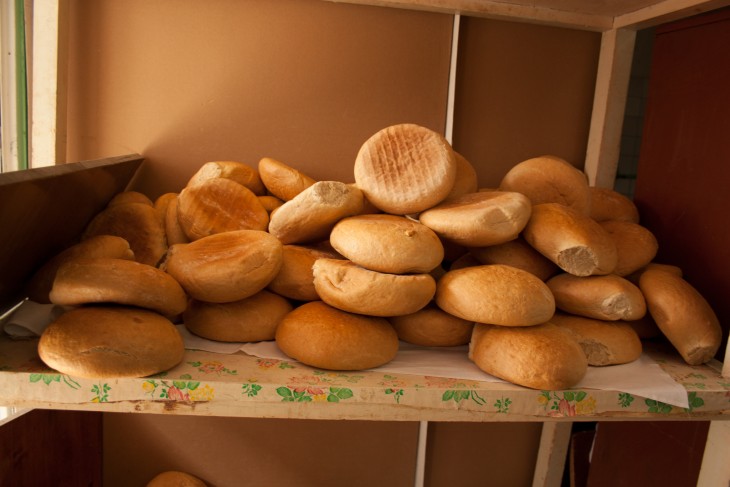 Severodonetsk, Ukraine, 17 April 2015. The programme was an instant success and has been extended until June. CC BY-NC-ND / ICRC / J. Barry

The concept is simple. The ICRC supplies 2.5 tonnes of flour five times a week to a local bakery, which contributes the other ingredients and produces 2,200 loaves daily, keeping a percentage of the flour for its own production. The ICRC also pays for the bread to be taken to the three distribution points where Red Cross volunteers are waiting to hand it out each morning. The programme has now been extended until June.

All the bread goes to displaced families. Each adult receives one loaf every two days, with an extra loaf per family if there are two children and two extra loaves for families with three or more.

Thirty-year-old Inna, a former restaurant administrator, comes to collect bread every second day. "My six-year-old son stayed behind with my parents near Popasna," she explains as she settles her five-month-old daughter Polina into her pram. "But I decided to bring the baby here, as a safety precaution. At first I lived with a friend, but now I've rented an apartment as it's likely to be a long time before we can go back to our village." 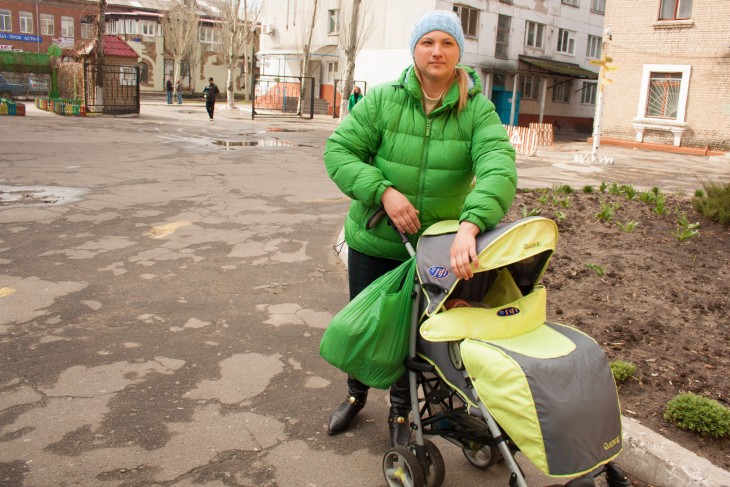 To supplement Inna's bread ration, her mother sends her pickled vegetables from her garden, and other bottled preserves. "I live on humanitarian aid," Inna remarks. "I can't afford to buy meat anymore and it's difficult to manage. I'd like to try and find a job but I have to look after the baby."

Ukraine, famous for its industrial plants and coal mines, is also known as the breadbasket of Europe because of its fertile black soil. But the conflict in the east has changed all that. The fields of wheat and sunflowers are sown with landmines, and the local economy has tumbled, leaving factories and services struggling to cope in many areas.

Prices have risen, too. Today a standard loaf of bread costs around 10 Hryvnias (50 US cents) in Severodonetsk, up from around four Hryvnias a few months ago, putting this daily staple beyond the reach of many displaced and unemployed people.

"Beneficiaries tell us that they use the money they save on bread to buy other things they need," explains Lubov as she sits down again at her table to resume work. "They say it makes a huge difference to their lives. I can confirm that." 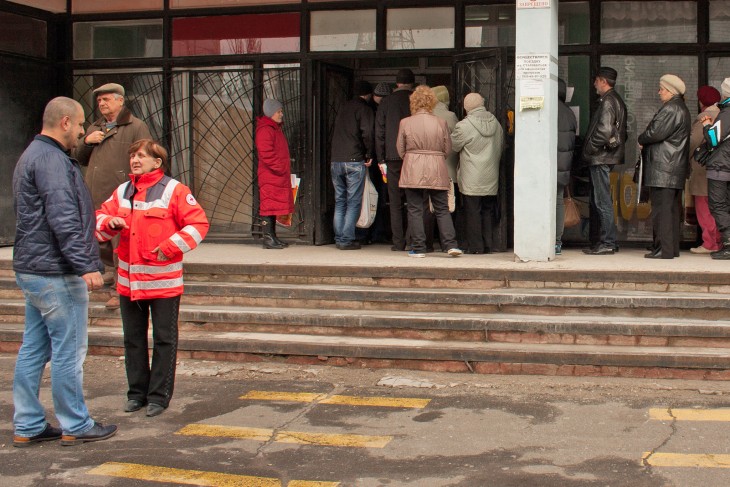 The bread queue moves slowly forward, people chatting as they stand in line, wrapped in coats and hats against a chilly spring wind, shopping bags at the ready. This simple programme and the volunteers who run it are doing more than just filling stomachs. They are offering a little humanity to people deprived of all they hold dear.