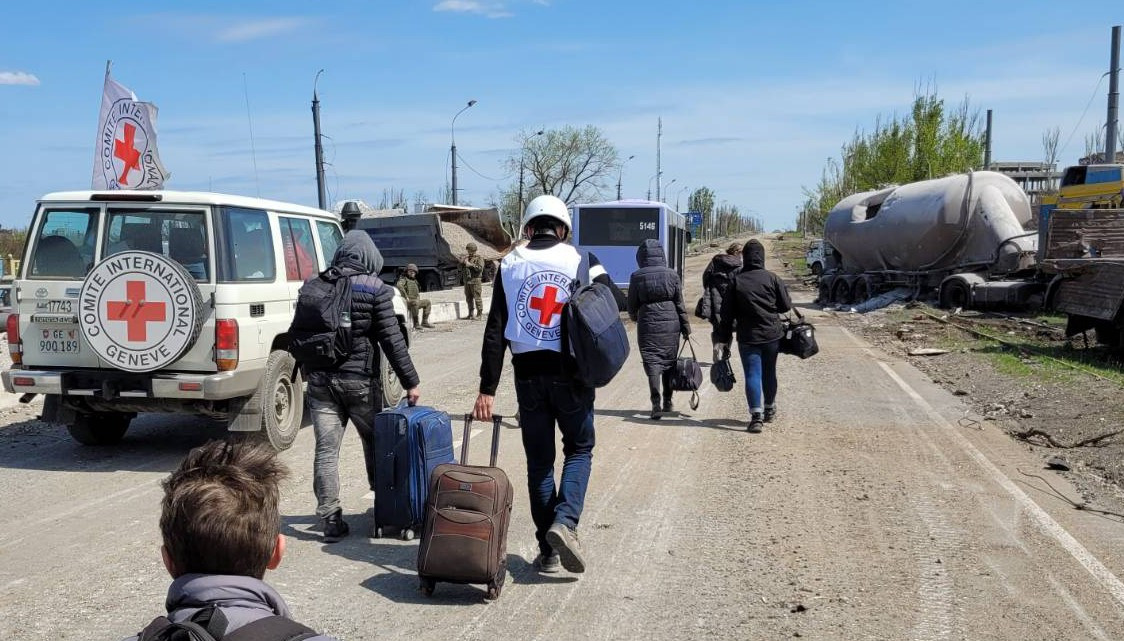 Geneva (ICRC) – Several dozen civilians left the Azovstal plant area in Mariupol during a five-day safe passage operation coordinated by the International Committee of the Red Cross (ICRC), the parties to the conflict and the United Nations.
News release 03 May 2022 Ukraine

A convoy of buses and ambulances accompanied by ICRC and UN teams was joined by families and individuals in private vehicles along the way. More than 100 people, including some who were wounded, reached Zaporizhzhia on Tuesday. Other people from the plant went elsewhere; the ICRC did not organize nor accompany these civilian movements.

This complex operation has allowed civilians to leave Azovstal and the Mariupol area, though we had hoped that more people would have been able to join," said Pascal Hundt, ICRC's head of delegation in Ukraine. "Similar agreements between the parties are urgently required to alleviate the immense suffering of civilians trapped in hostilities.

For this operation to succeed, the ICRC helped the parties identify concrete points they ultimately agreed upon between themselves. Those specifics included time, location, evacuation route, and other logistical details, as well as exactly who could be voluntarily evacuated.

As a neutral and impartial humanitarian intermediary, the ICRC has been facilitating the intensive confidential dialogue between the parties on the safe passage of civilians since late February.

"It is an immense relief that some civilians who have suffered for weeks are now out," said ICRC President Peter Maurer. "The ICRC hasn't forgotten the people who are still there, nor those in other areas affected by the hostilities or those in dire need of humanitarian relief, wherever they are. We will not spare any effort to reach them."

Note to editors and producers:
1. Established in 1863, the ICRC operates worldwide, helping people affected by conflict and armed violence and promoting the laws that protect victims of war. A neutral, independent and impartial organization, its mandate stems from the Geneva Conventions of 1949. it is based in Geneva, Switzerland, and works in more than 100 countries.

2. The ICRC has been working in Ukraine since 2014 with a team of over 600 staff members. Working closely with the Ukrainian Red Cross Society and our Red Cross Red Crescent Movement partners, we are increasing our response to the vast and growing humanitarian needs in Ukraine.