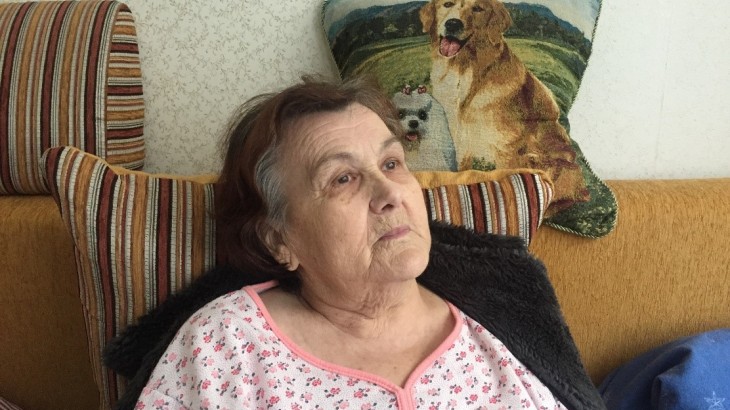 In October 2017, the ICRC helped reunite a seriously ailing woman from Donetsk with her daughter who lives in the south of Odesa region. Recently, our colleagues from the Odesa office visited the family in Izmail and came back with fond memories.

Born and brought up in Donetsk, 76-year-old Alla Mykolaivna had lived there all her life. But all that changed when she suffered a stroke this summer, due to which the left side of her body got paralyzed. Anxious about her mother’s deteriorating condition, her daughter Larisa sought help from the ICRC in taking Alla across the contact line to her home in Izmail.

In fact, worried about her mother’s weakening health, Larisa had asked Alla to move in with her earlier too. But the septuagenarian had refused to leave her hometown. This time, however, having spent two weeks in the hospital after the stroke, Alla realized that staying alone wouldn’t be an option. And so began her journey to Izmail, her daughter’s home.

“An ambulance took us from Donetsk to Mariupol; my mother could only travel lying down. We crossed the checkpoints quickly and were given priority everywhere. The journey took us two-and-a-half hours. As a child I remember going to the seaside in Mariupol – it was just a one-hour drive and we used to reach the beach in no time. Now, of course, everything is more complicated and takes longer,” Larisa recalls.

Larisa moved to Izmail almost 40 years ago when she graduated from the university. In the USSR of the 1980s, it used to be a closed border town – Romania is at a stone’s throw from here. Alla, who visited her daughter often, says, “Back then, you had to get a special pass to enter Izmail. There are passes now too, but for the other direction.” 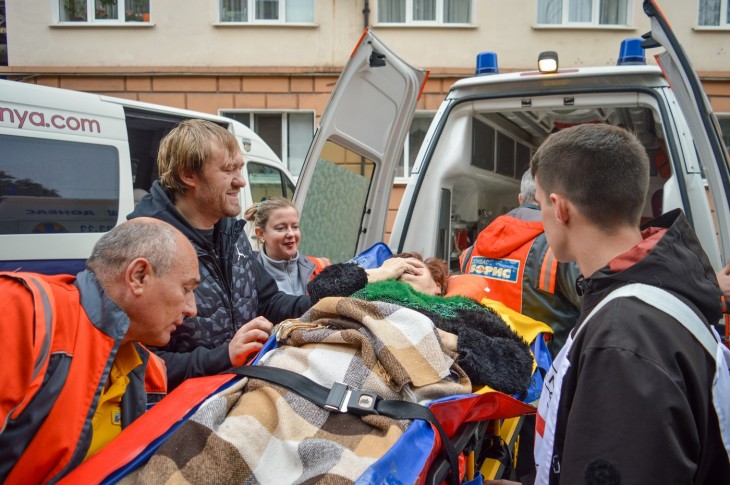 In Mariupol, Alla was transported to Larisa’s car, which was specially equipped for her comfortable transportation. Despite this, the travel was not easy for the elderly woman – her condition worsened in Izmail and she had to be hospitalized again.

After the initial hiccups, Alla has finally settled in. Her daughter’s family treats her with care and attention, and the grandchildren and a great-grandson often come to visit her from Odesa. The most enthusiastic welcome, however, has come from Carat, Larisa’s toy terrier. “My daughter always liked dogs. When she was young, she had kept a spaniel and I would often take care of it when Larisa was away,” Alla fondly looks at Carat, as she adjusts a cushion that has dogs embroidered on it.

Though happy to be reunited with her daughter and other family members, the elderly woman misses Donetsk. “It is a very beautiful city, so green and full of flowers. I used to live in the city centre and loved the view from there. What a stadium they had built! The entire country was proud of it. All my life, I worked in the audit and control department of a road transport enterprise in Donetsk. Though people were a little scared of me, they respected me. All of them would be on their toes as soon as word traveled about a possible audit by me,” she reminisces, all this while rubbing and massaging her left hand to make sure it doesn’t “relax”. Former colleagues often call up Alla to find out how she is doing and to keep her updated.

Alla knows that her recovery from the paralysis is going to be long and hard. Determined to start walking again, she says the support from her family is going to help her get better soon. Her loved ones have no doubt about that either.

“It was difficult when mom was so far away. I would be worried about her all the time and couldn’t do much to help her. Now that she is here and the family is reunited, everything will get better,” Larisa says, relief writ large on her face.

Read this article in Ukrainian.