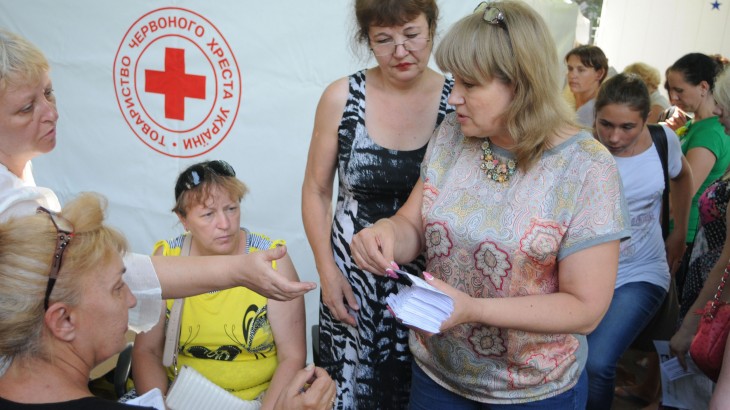 The 5 September ceasefire agreement has brought some respite to people affected by the conflict in eastern Ukraine. Amid hopes that this will lead to a permanent cessation of hostilities, the ICRC is helping people face the consequences of the fighting.

Today, the ICRC delivered 60 tonnes of food aid to Lugansk, supplementing supplies received from Russia and elsewhere over the past weeks which were distributed by the local authorities to people in need.

“With winter coming up, ICRC is working with the local authorities in eastern Ukraine to meet the most pressing needs," said Michel Masson, head of the ICRC delegation in Ukraine. In the coming weeks, the ICRC will be distributing basic shelter materials in Lugansk, enabling rapid repairs to the roofs and windows of 500 homes and is currently purchasing glass, cement and roofing material to repair the houses of some 31,000 people in the Slavyansk area.

There are reported to be 250,000 displaced people inside Ukraine, most of them from the Lugansk and Donetsk regions. Many more have fled to Russia. Some people are now returning to find public infrastructure damaged or destroyed and basic services, such as health care and education, disrupted.

At the same time, the situation in the Donetsk region is causing concern, as it has become more volatile in the last few days, with sporadic confrontations leading to casualties among civilians.

The ICRC’s humanitarian efforts are focused on areas where it has expertise, such as assisting hospitals, helping the authorities to manage dead bodies in a dignified manner and visiting people deprived of freedom in connection with the conflict.

"We remain in contact with the Ukrainian and Russian authorities on their humanitarian initiatives," said Laurent Corbaz, head of ICRC operations in Europe and Central Asia. "So far, Ukraine and Russia have not reached a final agreement on the terms and conditions of a cross-border aid operation. In the absence of such agreements, we cannot facilitate the passage of convoys from Russia. However, we are continuing to advise on and facilitate the distribution of aid by the local authorities."

Electricity and mobile phone coverage have been restored in parts of Lugansk, and people can find areas from where they can call their relatives. At the same time, the ICRC continues to collect short "I am alive" messages from people who have still not managed to reconnect with their families.

Here is an overview of our recent activities:

Since the beginning of September, the ICRC has collected over 80 "I am alive" messages from people in Lugansk, for delivery to relatives in Ukraine and abroad.

The ICRC is maintaining contact with all parties to the conflict on the issue of conduct of hostilities. In particular, we are urging them to refrain from attacks on civilians or civilian objects.