Ukraine: The smoke from the stove unites families 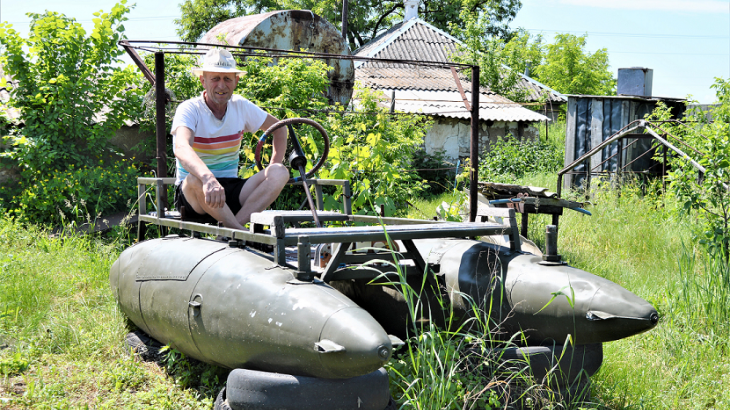 Viktor poses with the self-made catamaran on which he often sailed down the Siverskyi Donets river before the conflict started in eastern Ukraine. CC BY-NC-ND / ICRC / O. Loshakova

Viktor and his wife have not seen their children and grandchildren for more than six months now. They live only a few kilometres away from one another in the Lugansk/Luhansk region but are 100 km apart because of the ongoing conflict in eastern Ukraine. Living on either side of the contact line they can spot each other's homes at a distance from their backyards but can't cross over to say a quick hello. The only way to meet one another is to make an exhausting and expensive trip through Stanytsia Luhanska where they can cross the contact line after a long detour. So they seldom meet.

While goslings and budding plants brighten up the spring and various tasks occupy summer days, the winter grows empty, depressing and cold for the couple. The lack of family to bring warmth stings sharply in those months. "Once in late autumn our daughter called and said, 'we can see a trace of smoke rising from your stove, so we know you are okay and have already started heating the home'," shares Viktor. The stove was given by the International Committee of the Red Cross (ICRC) as part of its assistance to the most vulnerable people in the region. "This stove is doing so much more than keeping our bodies warm in the bitter cold here. It is connecting us with the rest of the family and warming up our souls. We miss our family so much! Thank you for giving us this 'talking smoke' that sends out signals above our home," he says with a smile, the pain of separation deep in his eyes. 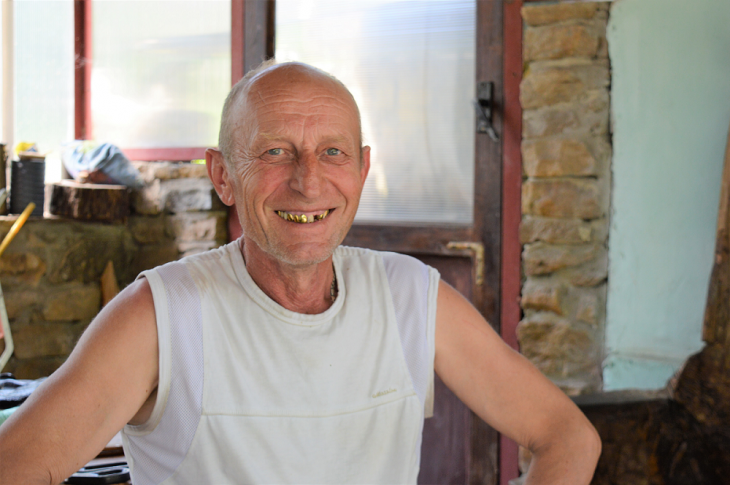 Viktor is one of the few people who have stayed on in the isolated village of Lobacheve in conflict-affected Lugansk/Luhansk region. CC BY-NC-ND / ICRC / O. Loshakova

The conflict that has been going on for five years has disrupted everything in Viktor's life. One of the few villagers who stayed on in Lobacheve since the heavy shelling began, he says those who are still around have very few options. "Lobacheve is isolated because it's so close to the contact line. The young people left to escape the conflict and those who remain are like me – not yet pensioners but also without jobs," says Viktor. The villagers try to sustain themselves with whatever they can grow or through humanitarian aid.

The ICRC has been assisting them with livestock grants or by distributing material to build greenhouses so that they can grow their own produce and sustain themselves. This is helping to bridge the gaps caused by the destruction of infrastructure and is trying to ensure that there is no shortage of food.

Viktor is the only one in the community who also grows vegetables for sale. However, it is a difficult undertaking. "The only road we can use to reach the market is in very bad condition and the transport and other costs are disproportionately high compared to the price we get from wholesale buyers. Last year's revenue was so miserable that we didn't even have enough money to buy seeds or a new cover for the greenhouse this spring," he shares.
But Viktor continues to tend the garden and is also planning his next steps. "I received an ICRC grant with which I bought 100 geese. In spring, I planted a lot of vegetables to feed them, found a pasture and constructed a shed. I have enough land for this. My neighbours have left, so I cultivate their yard too," he says.

Along with all other things, the conflict has also robbed Viktor of his favourite pastimes. While he is a skilled craftsman who works with wood and scrap metal, his favourite activity was to fish. A self-made catamaran on which Viktor and his friends often sailed down the river before the conflict began is now covered with overgrown grass. He is waiting for the day he will be able to go fishing again in Siversky Donets and catch big fish. He will have to wait for the conflict to end for that wish to come true. With no access to the river, even a tiny pond near the village pulls him as a magnet. 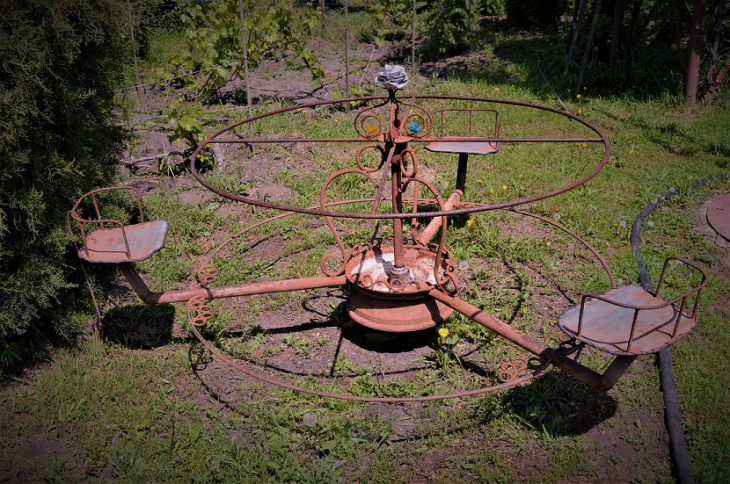 The merry-go-round that Viktor has made for his grandchildren who are unable to visit because their home is on the other side of the contact line. CC BY-NC-ND / ICRC / O. Loshakova

Unable to meet his children and grandchildren when he wants to, unable to work and earn as he wants to and unable to pursue any of the leisure activities he enjoys, Viktor is longing for an end to the conflict. Meanwhile, in his garden a merry-go-round that he made for his grandchildren stands motionless, as do the toys that are stacked neatly nearby. It seems that they too long to see the couple's most awaited and dearest guests.