What should we do when the world is burning? Start by restoring laws of war 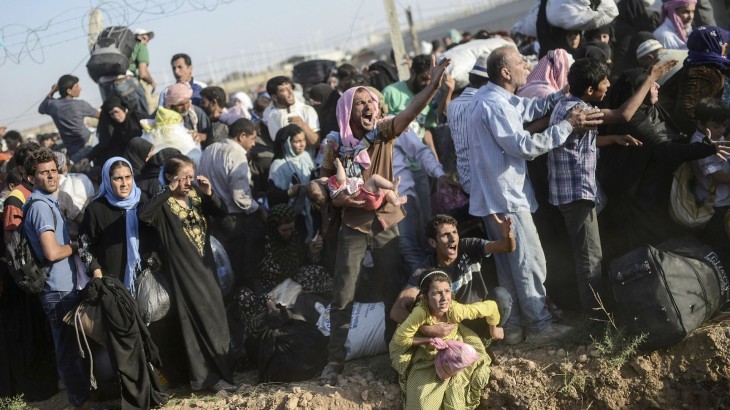 Today's complex conflicts often overlook the fundamental values enshrined in the Geneva conventions. Here's how we can ensure its principles are honoured

The Middle East is in turmoil. War is raging in Africa. Eastern Europe is engulfed in conflict. In major western cities, such as Paris, the population lives in fear. Hundreds of thousands of people are on the move. An unprecedented humanitarian disaster is unfolding. Fear and uncertainty dominate public discourse.

This was the reality at the height of the second world war, but the parallels with today are clear.

Nearly five years of war in Syria, and a dozen other conflicts around the globe, have left more than just a huge wave of human suffering in their wake. They have left many people bewildered and afraid.

Conflicts have become more complex and more inter-connected. The damage to populations and civilian infrastructure is deep and long-term. And there is spillover into neighbouring regions. We cannot remain aloof any longer. These conflicts are affecting us all.

From a humanitarian perspective, it is clear that short-term, band-aid solutions are no longer viable. More is needed. The world community is trying to respond, but is struggling.

This week, a fresh attempt to find answers and plot a way forward will take place in Geneva with a unique gathering of representatives from nearly 200 governments along with members of the Red Cross and Red Crescent Movement.

This special conference takes place every four years, addressing some of the most pressing humanitarian issues of our time. Migration, sexual violence and attacks on healthcare will be among the topics this year.

But top of the agenda will be one, crucial proposal that aims to address one of the most pressing humanitarian issues of today – how to find ways to strengthen respect for the laws of war.

The sad fact is that horrendous human conflict is nothing new. The abuse of civilians and combatants has existed since the dawn of time. Is human suffering any greater today than yesterday? Probably not. But some things have changed – and those changes demand a response.

For one thing, our awareness has increased dramatically. In our fibre-optic world of tweets and tablets, we are more conscious of the world around us. The technicolour violence and humanitarian abuses of today are just a flick of a switch away.

In our homes, on the train, in our coffee shops; we see it, we feel it, we know about it. All of us. All of the time. Human suffering is visible, constantly.

But this is not the only change. The big difference between the situation at the height of the second world war and today is the existence of a framework by which we can measure and attempt to reduce man's inhumanity to man. We have a reference point: the Geneva conventions.

The International Committee of the Red Cross (ICRC) was instrumental in the creation of the conventions in 1949 and, signed up to by virtually every country on the planet, they mark one of the greatest humanitarian legal achievements of the 20th century.

They set out limits to war, offering protection to civilians, and parameters as to what is acceptable and what is not acceptable on the battlefield and beyond.

Make no mistake, our new-found, technology-based awareness and our ability to measure and classify the consequences of conflict are two huge advances. They are signs that society is maturing; that we are prepared to look in the mirror and cast judgment on ourselves.

But these advances also bring responsibility. They challenge us to do something about the occasions when we act so inhumanely to one another.

And the truth is, we are failing in our response.

We need to do more, a lot more, to ensure compliance to those very principles that we all signed up to in the bleak and desolate aftermath of the second world war.

And that is why, at the top of the agenda of the International Conference of the Red Cross and Red Crescent Movement, is a proposal to address this situation.

For the past four years, there have been extensive discussions, led by the ICRC and the government of Switzerland, with states about creating a compliance mechanism – a non-politicised place for states to learn from each other on how to ensure the laws of war remain as relevant and as useful as possible.

At the conference, states will be asked to support a voluntary system that is a "missing piece" in the current legal landscape, a mechanism that allows the sharing of best practice and technical expertise – so necessary in the complex conflicts of today.

In short, it is an attempt to provide what has been missing from the Geneva conventions for more than 60 years; a specific mechanism for reporting on how international humanitarian law is applied. It is a vital step towards reaffirming the fact that wars do indeed have limits, and those limits need to be respected.

If approved, this new mechanism would be a crucial development in international humanitarian law.

We need to understand that the Geneva conventions are not just some historical documents born of another time, created for another purpose. They are of burning relevance and importance today – and we need to ensure they are used as such.

This article was first published in The Guardian. Peter Maurer is the President of the ICRC.