'Whether Afghanistan, Syria or Ukraine: IHL is the line between barbarity and our common humanity' - ICRC President Peter Maurer

This statement was delivered by Peter Maurer, President of the International Committee of the Red Cross, on the 1 March 2022 at the High Level Segment of the 49th Session of the Human Rights Council.
Statement 01 March 2022 Switzerland

I address this Council with a heavy heart.

Once again we are confronted with the dark shadow of conflict resulting in death, destruction and despair for civilians.

I speak to you today in the ICRC's role as the guardian of the Geneva Conventions – a set of universally ratified treaties, applicable to all parties in conflict.

While we understand the international community is focused on the question of the legality and political justification of the conflict in Ukraine and its impact on the European and global security architecture, the ICRC's mandate is to remind all States and parties to conflict of their obligations under international humanitarian law that they have universally committed to uphold.

International humanitarian law makes no judgement on the motive of fighting.

It guides parties through the dark times of war to make humane choices when faced or engaged in armed conflict – the conduct of hostilities according to well-established principles and the protection of civilians, vulnerable groups and civilian infrastructure in particular.

Today, in more than fifty situations of active armed conflict around the world, we see violations of international humanitarian law, leading to the death and disappearance of civilians, the destruction of their homes, hospitals, schools, water and electricity supplies, and the separation of families.

Whether Afghanistan, Ethiopia, Yemen, Syria, the Sahel and Lake Chad regions or Ukraine... while each situation is unique, the long-standing impacts for civilians are similar and well documented:

For decades, the ICRC has consistent and recurring messages for all parties to conflict and those who support them:

Why do we repeat these mantras of international humanitarian law?
... Because we see too many wars fought with impunity.
... Because the gap between promises and practice is growing dangerously wide.
... Because the restraining force of the law is weakened by expedient and transactional interpretation of obligations.
... And because formal agreements to basic demands are undercut by cynical justifications of wars without limits or mercy.

Today the ICRC highlights two concerns, where if a minimum of humanity was restored, the lives of millions would be improved: one, to prevent the destruction of critical civilian infrastructure and two, to create futures for displaced people.

The humanitarian consequences when essential services, often under fire in urban settings, are grim. Millions of people can be affected: no safe water to drink, no electricity to power homes, nor health services.

It is imperative that critical civilian infrastructure is actively protected and not attacked.

In particular, the use of heavy explosive weapons in densely populated areas should be avoided; the use of such powerful weapons in urban environments carries with it a high likelihood of indiscriminate effects.

I am also concerned for the fate of people fleeing conflict and violence.

Around the globe millions are trapped in situations of displacement... Others are detained under security legislation and lost in dysfunctional justice systems that put a freeze on their rights.

We see the anguish of people fleeing right now across the borders with Ukraine. We see the tears of children and we feel their anguish. The ICRC also sees this anguish during conflicts around the globe: People displaced from the deadly wars in the Sahel, in the Lake Chad region, in the Middle East.

Double standards should not apply: States have generously tried to find practical responses to help people fleeing Ukraine to find safety. This response should be the norm. I encourage States to apply similar practices for people trapped in other circumstances. Such pragmatic compassion must be found for them too.

We call for action on three points:
1. Respect for international humanitarian law is critical: the principles of distinction, proportionality and precaution must be thoroughly and proactively respected in the conduct of hostilities. Civilians, detainees and prisoners of war must be protected and treated humanely.

2. All parties and all States must allow and facilitate the work of neutral, impartial and independent humanitarian organisations, such as the Red Cross and Red Crescent so we can safely aid those in need. Do not instrumentalize us. Our work is to save lives, not for political gain. Sanctions and other restrictive measures must be designed to allow humanitarian action to freely occur.

3. The international community must do everything in its power to push belligerents to step back from conflict and stop the bloodshed.

The ICRC, as a neutral intermediary, is ready to facilitate contacts between belligerents to respond to the most pressing humanitarian needs.

Colleagues, we cannot ignore the spread of conflict in Ukraine and many other active conflict theaters, where the ICRC has been working on all sides and for years.

Today our teams remain in place and are ready to help people once adequate security guarantees are given and a neutral space is respected.

Specific measures that provide protection and relief for civilians must urgently be found: whether through the creation of safe spaces, humanitarian pauses, and ensuring the evacuation and safe passage of civilians.

Provisions must be made for the safety, dignity and well-being for all civilians, including those most at risk: people with disabilities, children and the elderly.

Channels that bring effective humanitarian assistance are also needed, along with security guarantees from belligerents for safe access for humanitarian workers.

Support to parties should be given responsibly and include proactive support to help parties fulfil their IHL obligations.

This includes, for instance, ensuring that international humanitarian law is known by all those fighting on the ground, that prisoners of war are treated humanely, that people do not disappear, that mortal remains are collected in a dignified manner.

Excellencies, colleagues, limits on warfare must be implemented and defended.

I urge you to use your power to ensure that war has limits – in every armed conflict and for everyone – because wars without limits are wars without end. 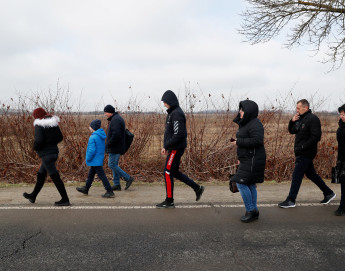 Statement from ICRC President Peter Maurer on the conflict in Ukraine