Why disability issues need to stay on top of the agenda 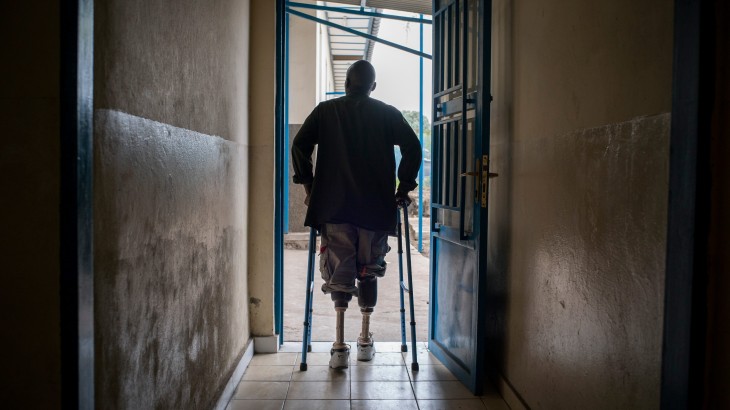 When Alberto Cairo gave a TED Talk on the ICRC's physical rehabilitation services in Afghanistan, he hoped it would "get a few clicks" and that maybe it would prompt more discussions about disability inclusion. Seven years later, his talk has been viewed nearly one million times.

Alberto has overseen the ICRC's orthopaedic programme in Afghanistan since 1992. As the UK hosts the Global Disability Summit this week, Alberto shares his thoughts on what progress has been made in the field in recent years.

Are you surprised at the continued popularity of your TED Talk?

I watched a few TED Talks just before doing mine. It was something very new to me. I only expected to get a few clicks.

It's great that it's been watched so many times. It shows that people want to know more and that disability issues matter.

What is the significance of the Global Disability Summit in London?

This Global Disability Summit is extremely important. It's a chance to focus attention on disability issues and for people with disabilities to make their voice heard. It's essential the international community listens and acts. We cannot be content with piecemeal change.

My dream is to see every government put disability, physical rehabilitation and inclusion among their top priorities. It is everyone's responsibility to act.

In you talk, you said your one wish was for organisations helping people with disabilities to listen to them and involve them. Have we made progress on this front?

I think we've made some progress here in Afghanistan. Today, we ask those with disabilities to be the decision-makers far more than we ever used to in the past – and not just in trivial matters.

They are involved in essential issues like patient management. Their experience and local knowledge also makes them invaluable in helping us to improve our projects.

More than 90 per cent of employees working on our physical rehabilitation programme here are people with disabilities.

So yes, we have made some progress in this respect, but there is still more to do.

What changes have you seen in recent years with regards to disability issues and physical rehabilitation work?

Globally, disability issues are much more openly discussed today and there is greater awareness and less fear of diversity. There is also greater recognition of the medical concepts behind physical rehabilitation.

In the past, when colleagues introduced themselves as physiotherapists, often the question that came back was: "Why does the ICRC give massages?"

In Afghanistan, the ICRC runs seven physical rehabilitation centres that provide rehabilitation and social integration for thousands of amputees and others with disabilities.

We now have a better school for physiotherapists and orthopaedic technicians. The prosthetic technology has improved, so our patients get better treatment. Things have improved, but we have not yet reached a perfect situation.

In your talk you said: "Dignity cannot wait for better times." What did you mean by this?

During the years I was referring to in the TED Talk, we didn't consider physical rehabilitation to be a medical priority. It was something important, of course, but it was not a top priority.

The people we were helping taught me about the close link between being able to walk, being independent, leading a dignified life – and the pressing need for it.

We were telling those with disabilities that they had to wait for treatment, given the fighting at the time. But they were desperate to rebuild their lives, their self-confidence and self-esteem.

Emergency humanitarian work and longer-term development are not mutually exclusive. Even during war people have to live as full a life as possible. Of course there are moments where you have to stop certain activities due to violence, but as soon as it's safe to do so, you need to get back to helping people.

In Afghanistan, conflict has been going on for decades now. People cannot wait for better times.

Your story about Mahmoud and his son Rafi illustrated the impact that physical rehabilitation can have on people's lives. Are you still in touch with Mahmoud?

Mahmoud was not a lucky person. He got a job with us and it seemed like his life was improving. But a few years later he was diagnosed with a heart condition and he died in a hospital less than 200 metres from our rehabilitation centre.

When I think of him I feel very sad. I'll never forget him or the words he spoke to me all those years ago: "I am a scrap of a man, but if you help me, I'm ready to do anything."