Yemen: 290 detainees released with facilitation of the ICRC 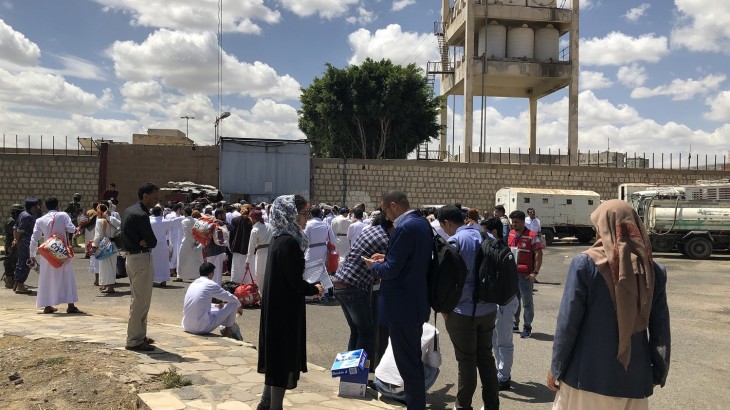 Geneva/Sanaa (ICRC) – The unilateral release of 290 detainees, including 42 survivors of an attack on a place of detention in Dhamar this month, took place today. The release was facilitated by the International Committee of the Red Cross (ICRC) and the United Nations following a request from the National Committee for Prisoners Affairs.

"We are always ready to act as a neutral facilitator in the release of detainees when we receive a request from the parties to the conflict and hope that this operation opens the door to further releases to bring comfort to families awaiting reunification with their loved ones," said Franz Rauchenstein, the ICRC's head of delegation in Yemen.

The ICRC's role in this operation was, first, to confirm the identities of the detainees foreseen to be released and verify if they wished to travel straight from Sana'a to their homes or if they wished to be transferred to an area under the control of the other party. The ICRC provided monetary assistance to pay for transportation and cover other costs which the released detainees may have during their trip home. Additionally, ICRC contacted the families of minors to ensure that they were informed of the release and were coming to meet them.

"We held confidential conversations with all detainees to listen to any concern they might have, make sure that they had been in touch with their families and collect the necessary information to follow up on their case if needed," said Robert Zimmerman, the ICRC's head of the protection department in Yemen.

As with every operation of this type, an ICRC medical staff member was present prior to the release to assess the health condition of the detainees, make sure they were fit to travel and make proposals to the authorities as to specific measures that some may have required. Two released detainees were transferred to their areas of origin by Yemeni Red Crescent Society ambulances.

The ICRC sees the release as a positive step that will hopefully revive the release, transfer and repatriation of conflict-related detainees as per the Stockholm Agreement signed by the parties to the conflict in December 2018.

Between April and August 2019, the ICRC, acting as a neutral intermediary, facilitated the transfer of 31 minors previously detained in Saudi Arabia, from Ma'rib, where they had been brought, to Sana'a, where they were reunited with their families. It also helped with the repatriation of a Saudi national detainee with a health condition to his country of origin, and the transfer of seven Yemeni detainees who were held in Saudi Arabia who were also suffering from various ailments back to Sana'a.