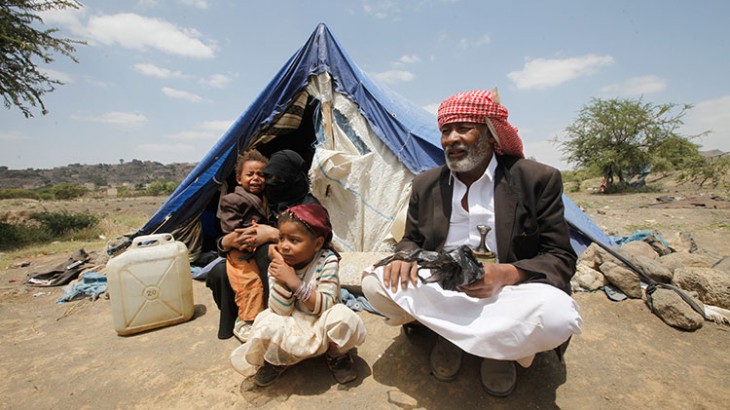 Speech given by ICRC Director of Middle East, Robert Mardini, to the High-Level Pledging Event for the Humanitarian Crisis in Yemen, held in Geneva, Switzerland.

I want to thank everyone who's contributed to the discussion so far and de-scribed, so accurately, the terrible humanitarian situation facing the people of Yemen. Behind every statistic there is a human tragedy.

The ICRC has been in Yemen since before the conflict started. We're deployed across the country. We're in places others cannot reach. And we cross front lines when others cannot. The IFRC has been investing consistently, over the past 15 years, in the capacity of the Yemen Red Crescent Society.

We see Yemen facing the largest food insecurity situation in the world.

We see basic humanitarian law being flouted. Civilians targeted. Civilian infra-structure destroyed. Only around 45% of the country's health facilities are func-tioning.

Sadly, we also see humanitarian workers injured and killed whilst trying to help others. Ten of our colleagues in the Yemen Red Crescent Society - and two of our own ICRC colleagues - have paid with their lives.

Warring parties must abide by international humanitarian law. Moreover, States should refrain from supporting those who fail to abide by the norms of war.

There's another important issue - a central issue - which I want to draw your at-tention to. The issue of detainees.

Every day the ICRC is approached by families from all sides, looking for news of their brothers, fathers and sons. It's a humanitarian imperative for them.

But the ICRC has only been able to visit a small number of detainees.

This has to change. We have to break out of a vicious circle:

All sides want the ICRC to visit 'their people' who're being held. But each side won't give us access - until their own people have been seen first. It's an impos-sible situation. An illogical tit-for-tat where everyone loses.

The ICRC remains ready and willing to assist in this area. But the vicious circle must be broken.

All people detained in connection with the current conflict should be visited. Period.

And we should not underestimate the important contribution this can make to the building of mutual trust between the different sides.

The situation in Yemen is deteriorating. As a result, the Red Cross and Red Cres-cent Movement has already begun stepping up its operations.

As I speak, one of our surgical teams - newly-arrived in the country - is working to save lives at the Al Thawra hospital in Hodeida.

A second surgical team is being deployed to the other side of the front line at Al Mansoura hospital in Aden where we have already treated 5'000 critically injured people this year.

The additional resources will support our activities close to the front lines, where people are suffering the most. We'll especially focus on reinforcing health ser-vices and we'll further boost the capacity of the Yemen Red Crescent Society.

We're working day and night, without fear or favour. Impartial and neutral.

Ladies and gentlemen, beyond your generosity and continued commitment what the people of Yemen need most is hope. Please do not disappoint them.