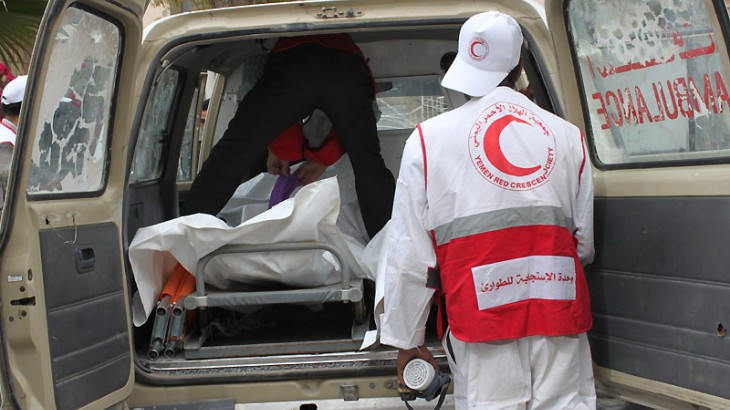 Yemen Red Crescent personnel unload a body from an ambulance at Amran Hospital. The ICRC is providing the Yemen Red Crescent with body bags and first-aid kits to help them respond to the emergency./ CC BY-NC-ND / ICRC / M.-C. Feghali

Amid the violence that has engulfed Yemen during the past six months, the ICRC has managed to respond to the growing needs of the victims. However, more must be done to ensure that medical personnel and facilities are spared the effects of the fighting.

"Our access to conflict victims in Sana'a, Al Jawf, Maareb, Hadramout and Abyan has considerably improved, and this is very good news," said Cedric Schweizer who heads the ICRC delegation in Yemen. "This was mainly achieved thanks to our contacts with all parties involved in the fighting, but also because more and more people now understand our humanitarian concerns and our impartial and neutral way of working."

Nevertheless, more efforts are needed on all sides to boost respect for the red cross and red crescent emblems. "Last month, we lost a young ambulance driver working for Yemen's Ministry of Public Health and Population who was on duty in Sana’a. In other parts of the country, hospitals, other health-care facilities and health-care vehicles were also directly affected by the violence. As a result, hundreds of sick or injured patients were deprived of the quick and efficient medical attention that they need to stay alive," said Mr Schweizer. "The customary rules and international laws are clear: the red cross and red crescent emblems displayed by those facilities must be respected by all belligerents. Protecting health-care workers who respond to emergencies during conflict saves lives. Targeting them could amount to a war crime." 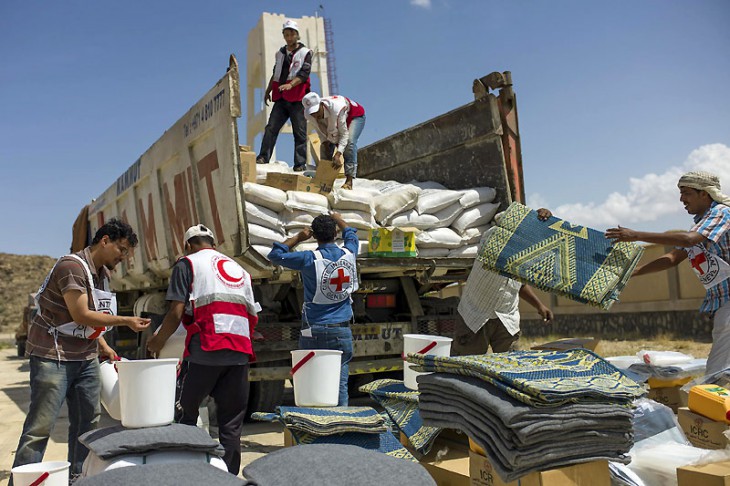 With the intensification of the fighting in southern provinces of Yemen and in and around Sana’a, many displaced people are struggling to support their families.

Between April and September, the ICRC assisted some 900 people in Ghail Bawazir, in Hadramout governorate, who have been displaced by the ongoing conflict. Each family was given rice, lentils, beans, oil, sugar and salt, blankets, tarpaulins, hygiene products and kitchen sets. Around 2,250 people in the Mudiah and Khanfar districts of Abyan were also helped, as were over 9,600 people displaced as a result of the fighting in the Iyal Surih, Hamdan and al Ashmore districts of Amran. Food rations were provided for over 650 displaced people in Sa'ada.

The ICRC vaccinated livestock against contagious diseases such as ovine rinderpest and sheep pox to help the owners maintain their livelihoods. Over 200,000 head of ruminants were immunized in the Sheda, Adhaher, Ghamer and Razih districts.

In Sa'ada, 259 people took part in a cash-for-work scheme by helping to upgrade 23 wells in the Hajrat Fallah area. In Lahj, Abyan and Aden, 95 people with disabilities received grants to help them earn a living and 761 others were given temporary employment helping with canal improvements in Abyan's Khanfar district.

The ICRC supports 11 primary health centres throughout Yemen. By providing continuing education for midwives in the clinics it supports, the ICRC is helping to improve the care available to pregnant women. Forty-six nurses recently completed a 30-week continuing education project that involved working with emergency patients in Al Razi Hospital in Abyan governorate.

Over the past six months, the ICRC has supported hospitals in their efforts to provide appropriate treatment for large influxes of people wounded in the fighting. Medication and medical supplies donated by the ICRC were used by 12 hospitals in the conflict-stricken areas of Seyoun, Hadramout, Shabwa, Amran, Al Jawf, Maareb, Sana’a and Abyan to treat over 320 war-wounded patients and to perform over 565 operations.

The ICRC also awarded six scholarships for Yemeni students from Mukalla, Sana’a and Aden for training in Bangalore, India, as prosthetists/orthotists. In ICRC-supported physical rehabilitation centres, services were provided for over 25,000 people. In addition, 112 wheelchairs and 849 crutches were distributed.

Between April and September, in cooperation with the local authorities, the ICRC installed water tanks and distribution points serving over 700 people in nine schools in and around Amran city.

It also upgraded 13 wells serving some 5,900 people in six villages in the Lahj district, and installed water tanks and a distribution network that improved access to drinking water for around 3,430 people in the villages of Kanfel and Al Kobr.

In Sa'ada, ICRC staff completed renovation work on the water network in the old city, rebuilt the Marran Health Centre and improved the sanitation and drainage system for Huth Rural Hospital.

In the last six months, the ICRC made 16 visits to 11 different places of detention in Yemen to monitor the treatment and living conditions of nearly 7,600 detainees.

During the same period, the ICRC distributed 1,452 Red Cross messages to migrants and refugees who had lost contact with their relatives back home in the Horn of Africa. In addition, 1,937 messages were collected from people in Yemen for distribution to family members abroad. The ICRC received 39 requests to trace family members separated by conflict or migration; in eight cases, the people being sought were located and put in touch with their loved ones.

The ICRC also arranged 138 phone calls and videoconferences between families in Yemen and relatives detained in Guantanamo or Bagram.

Reminding parties to a conflict of their obligation to protect civilians is a fundamental part of the ICRC's work. The organization also endeavours to promote and strengthen knowledge of international humanitarian law by organizing presentations and training for military and police forces, prison staff, students and professors.

In addition, the ICRC strives to raise awareness among the security forces and the local and tribal authorities across Yemen of the need to ensure safer access to health care, the quick passage of ambulances and protection for health-care personnel and their patients.

Working together with the Yemen Red Crescent Society

The ICRC trains beekeepers in Al Dhalea so they can produce honey as a source of income for their families. ICRC /B. Lamon