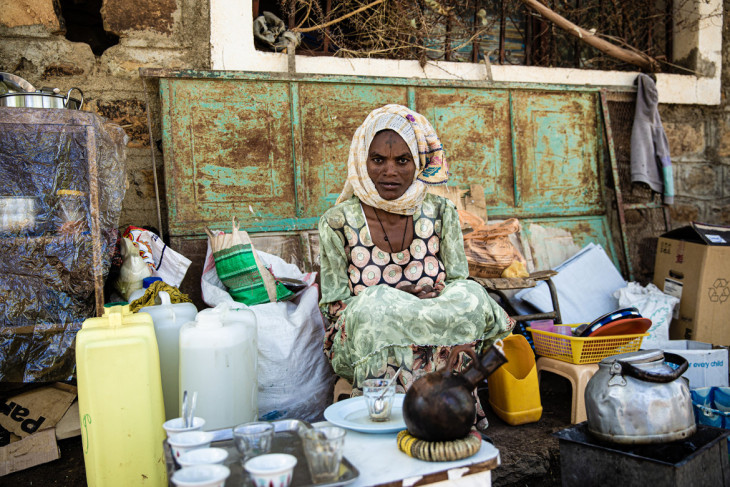 Displaced people have been relying on the generosity of host communities. This however is increasingly difficult for host communities to continue as they struggle from the economic impact of the violence. Alyona Synenko / ICRC

Increased violence and fighting in the northern part of Ethiopia, in and around the Tigray region, continues to severely impact the civilian population. Hundreds of thousands of people have fled their homes looking for shelter and safety.

Since the beginning of the crisis, the ICRC, together with our partner the Ethiopia Red Cross Society (ERCS), has been helping people in northern Ethiopia — specifically Tigray, Amhara and Afar—to respond to their most basic needs.

So pleased an @ICRC and @EthioRedCross convoy reached #Mekelle today to restock #Ayder Hospital, which was paralyzed by a lack of drugs.

Doctors and nurses had to stop surgery, intensive care, and other services because they didn’t have medicine, electricity, or water. pic.twitter.com/e1dQg9cyaE

#Ethiopia: We have increased our presence in #Amhara and #Afar regions and continued the support in #Tigray region.
Read more from our operational update https://t.co/qG8ps2QYdE

Families are displaced and separated. Livelihoods are destroyed. The health care system remains under enormous strain. Many rely on humanitarian assistance to meet their basic needs.

In Northern Ethiopia, ICRC is working to support facilities and essential services impacted by shortages in fuel, power and telecommunications, especially in the Tigray region. We are also responding to needs in Afar and Amhara, including support to families recently forced from their homes by the conflict. From January to September 2021, the ICRC and the ERCS have:

The fighting in northern #Ethiopia has left many injured and maimed.
We are supporting the affected through our physical rehabilitation program.
We are also organizing a referral system to reach people from different parts of the #Tigray region.

The ICRC and the ERCS remain committed to support all victims of conflict and violence regardless their origin, race, gender and faith across Ethiopia. The ICRC is also responding to humanitarian needs created by violence in other parts of the country such as Oromia, Benshangul-Gumuz, and Somali Regional State.

MORE ON THE HUMANITARIAN CRISIS IN NORTHERN ETHIOPIA

Ethiopia: Shifting frontlines in the north push more people to flee their homes

Ethiopia: ICRC scales up lifesaving medical support to respond to increased armed violence in several parts of the country

ICRC and ERCS deliver emergency relief to IDPs in Tigray