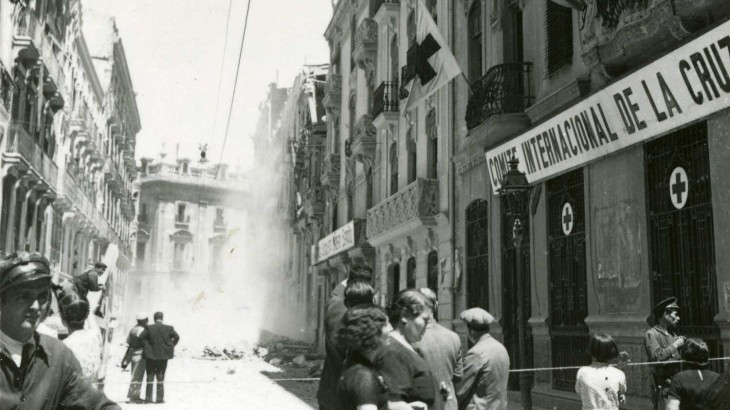 The ICRC delegation in Valence, Spain, at the height of the Spanish civil war in 1937.

The carnage of 1914-18 should have made this conflict the last. The public was horrified at the amount of blood that been spilt and war now seemed to have no place. But events themselves would quickly quash this idealism. Far from disappearing, the violence of war would take an even more brutal turn with the arrival of the totalitarian ideologies of the 1920s and 1930s. The ICRC had to assert itself in an environment that was increasing unsympathetic towards humanitarian principles.

Despite the most optimistic predictions, the conclusion of the “war to end all wars” did not signify the end of the ICRC’s mission. As it turned out, the organization found itself involved in a range of new activities, which it either carried out alone or in cooperation with the young League of Red Cross Societies, founded in 1919.

In the political, social and economic turmoil that followed the war, the ICRC worked in central Europe, where food shortages and typhus were affecting an already weak population; in Russia, where it contributed to a huge international relief operation for famine victims; in the occupied Ruhr area; in Upper Silesia, where its services as a neutral intermediary were in demand; and in Greece and Turkey, where it helped people displaced by the conflict between the two countries.

The ICRC also continued to conduct activities on behalf of political detainees wherever its presence was accepted. Missions were undertaken in Montenegro, Ireland, Poland and Lithuania. After Adolf Hitler came to power, the organization also made two visits to the German concentration camps.

At the same time as the number of people benefiting from its activities increased, the ICRC’s work began to diversify geographically. Japan’s colonial ambitions brought it to China in 1932, then again between 1937 and 1938. The organization also made its first forays onto the Latin American continent during the bloody Chaco war between Bolivia and Paraguay. In addition, the ICRC sent two delegates to Ethiopia, which had been invaded by Mussolini’s troops. They would have to stand by helplessly and watch as mustard gas was released and hospitals were bombed by the Italian air force.

The experience in Ethiopia seemed to foreshadow the way the entire conflict would unfold during the Second World War. Some belligerents had the chance to try their hand in a Spain torn apart by fratricidal violence. During the three-year Spanish civil war, the ICRC witnessed clashes whose ferocity reflected the harshness of the combatants’ ideologies.

The spread of humanitarian law

Of course, the ICRC had not been expecting this increase in belligerence and could do nothing to soften its impact on the victims. On its initiative, humanitarian law was extended in 1929 to prisoners of war, who were thereafter protected by an international convention in proper and due form. The organization also tried to secure similar protection for certain civilians, but to no avail. This legal vacuum would have terrible consequences during the Second World War.