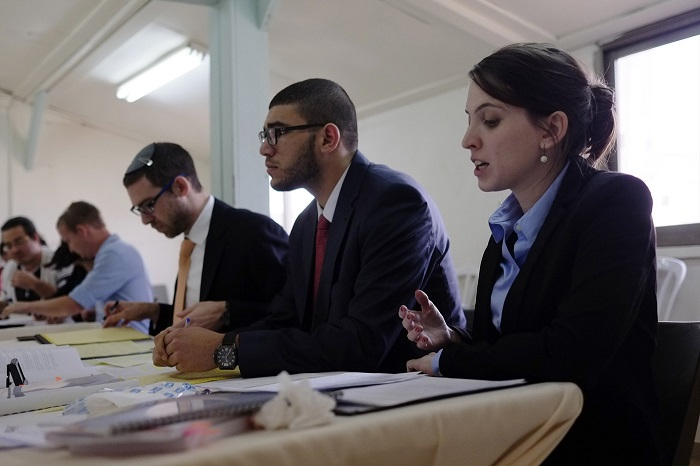 The 2022 National IHL Competition in Israel

The National IHL Competition has been training generations of alumni passionate about IHL. This year's Competition will take place on 7-10 November. Eleven teams will train and compete with each other, based on a fictional scenario of an armed conflict
Article 06 November 2022 Israel and the occupied territories

In the spring of 2007, the ICRC Delegation in Israel and the Occupied Territories invited a number of Israeli academic institutions to have their students participate in the first annual edition of a National Competition on International Humanitarian Law (IHL). Since then, the National IHL Competition has taken place annually, training generations of alumni passionate about IHL.

This growing community of legal practitioners has proven to be significant in exposing its members to carrier opportunities in the field of public international law and to channel their high level of knowledge, experience and enthusiasm into practice.
This year's Competition will take place on 7-10 November 2022 in cooperation with Alma: Association for the Promotion of IHL. Eleven teams from various Israeli law schools – including the Hebrew University of Jerusalem, the Tel Aviv University, Bar-Ilan University, the Reichman University, Sapir College and Zefat Academic College – will train and compete with each other.
The Competition is based on a fictional scenario of an armed conflict. Test sessions will present developments in the fictional scenario that give rise to legal challenges mimicking those that arise in real life situations. In each test the participants will be assigned a role and will be given a task requiring reference to IHL (e.g. providing legal counsel, arguing a particular legal position, negotiating, deciding on a course of action).
The Competition's jury is composed of five top expert scholars and practitioners that will assess the teams' performance. Following a series of preliminary rounds and a semi-final, two teams will be selected to compete in the competition final, which will be open to the public.
The team deemed to have performed best in the final will be pronounced competition winner.
We invite you to follow our online updates in our Facebook page, where you can also watch the live stream of the competition finals on Thursday, 10.11.2022 (specific time will be shared on our Facebook page).