Celebrating the Geneva Conventions and Building respect for IHL: A Commonwealth Perspective 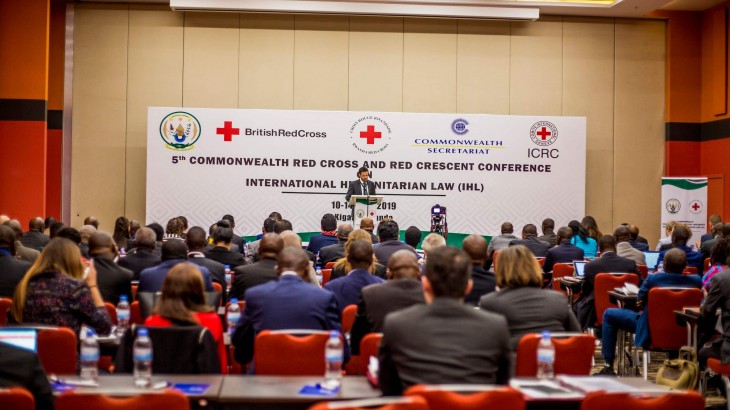 Helen Durham, Director of International Law and Policy of the ICRC, who attended and spoke at the Conference said “The 5th Commonwealth Red Cross and Red Crescent Conference on IHL puts Commonwealth States and their National Red Cross and Red Crescent Societies in good stead to continue to respect and to ensure respect for IHL.” She noted, “The key strengths of the Conference are developing knowledge and capacity, strengthening relationships, both institutional and personal, and identifying areas of further, collective humanitarian endeavour, so important particularly in this year of the 70th anniversary of the Geneva Conventions.”

Conference participants included representatives of government, armed forces, the Commonwealth Secretariat, the International Red Cross and Red Crescent Movement, as well as legal experts from Commonwealth nations. Within the framework of Commonwealth, drawing on the shared legal traditions of Commonwealth States, participants discussed IHL topics of interest, as well as new developments and current legal issues. The event strengthened the interactions between Commonwealth States and National Red Cross and Red Crescent Societies and was a platform for sharing information, experiences and good practice on the national implementation of IHL.

Building on discussions at the Fourth Conference, which took place in July 2015 in Canberra, Australia, the theme of this year's event was ‘Building respect for International Humanitarian Law: a Commonwealth Perspective". In the year of their 70th and 10th anniversaries respectively, it was an opportunity to recognize the significance of the Geneva Conventions of 1949 and the African Union Convention for the Protection and Assistance of Internally Displaced Persons in Africa (the Kampala Convention). The participants also prepared for the 33rd International Conference of the Red Cross and Red Crescent, which will take place in December 2019 in Geneva, Switzerland.

Throughout the Conference, panelists and participants alike acknowledged the 25th anniversary of the genocide in Rwanda. During a visit to the Genocide Memorial, in the presence of the souls of 250,00 of the victims, the participants recognized the pain and anguish of the survivors. They reflected on the gravity and responsibility of their work, not only to stop and rebuke violations of international law, but most importantly to prevent them.

At the end of the Conference, the participants accepted an Outcome Statement, expressing their enduring intention to take concrete action to humanitarian ends.