The “Chinese Hospital” in Kandahar

Blue sky, white clouds, olive green, these words can hardly be associated with the southern Afghan city of Kandahar, which is plagued by conflict. You certainly wouldn't imagine the city had a 'Chinese Hospital'.

The official name of this hospital is Mirwais Hospital. It lies in the north-west of Kandahar city, the capital city of Kandahar province. It was built with support from the Chinese government in the 1970s, and named after a historical leader of Afghanistan. But the local people call it 'the Chinese Hospital' and many do not even know its official name. 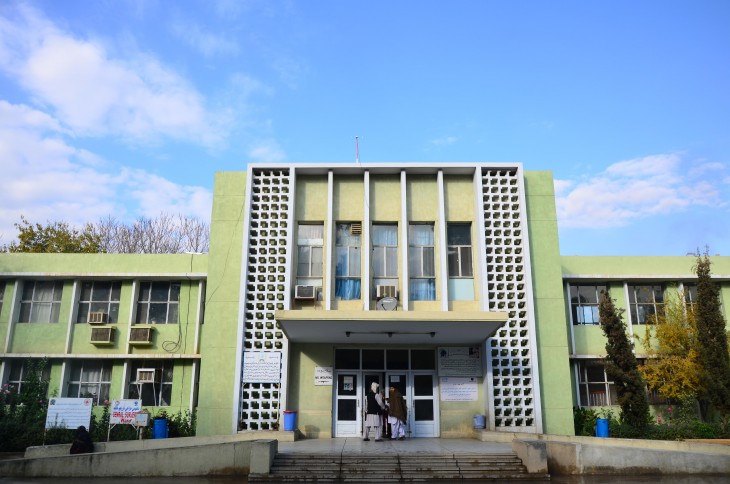 Kandahar, the second largest city in Afghanistan, is an important focal point, with the capital city of Kabul to the north, and Herat, the third largest city of Afghanistan, to the west. 100 km east of the city lies the Pakistani border. CC BY-NC-ND/ICRC/Shuangfeng Zhang

It is a road intersection of Kabul, Herat and Quetta（Pakistan）, important in terms of its traffic location. 'The Chinese Hospital' is not only the only large scale hospital in the province of Kandahar, but also the biggest and most advanced medical institution in the region. Close to 7 million people in Kandahar province and surrounding areas rely on this hospital for medical services. If we say that Kandahar is an oasis on the edge of Registan Desert, then this hospital is 'an oasis within the oasis'.

This small light green building is the main structure of 'the Chinese Hospital'. Groups of patients and their relatives are sitting in the courtyard to wait to see the doctors. The facility is simple, with few benches in the courtyard, so people are sitting on the floor or stairs. Their eyes were full of curiosity when they saw us. According to the local tradition, women would cover their faces and bodies. We are followed only by several curious young girls. This might be because few Chinese have ever come here. The colleague who travelled with us said, 'because you are a great fun to them.' In Kandahar, one needs to first obtain permission before taking pictures of others, especially for women. During the 2nd day of the visit, we brought some candies, and successfully 'bribed' them, and they agreed that we may take pictures of them. 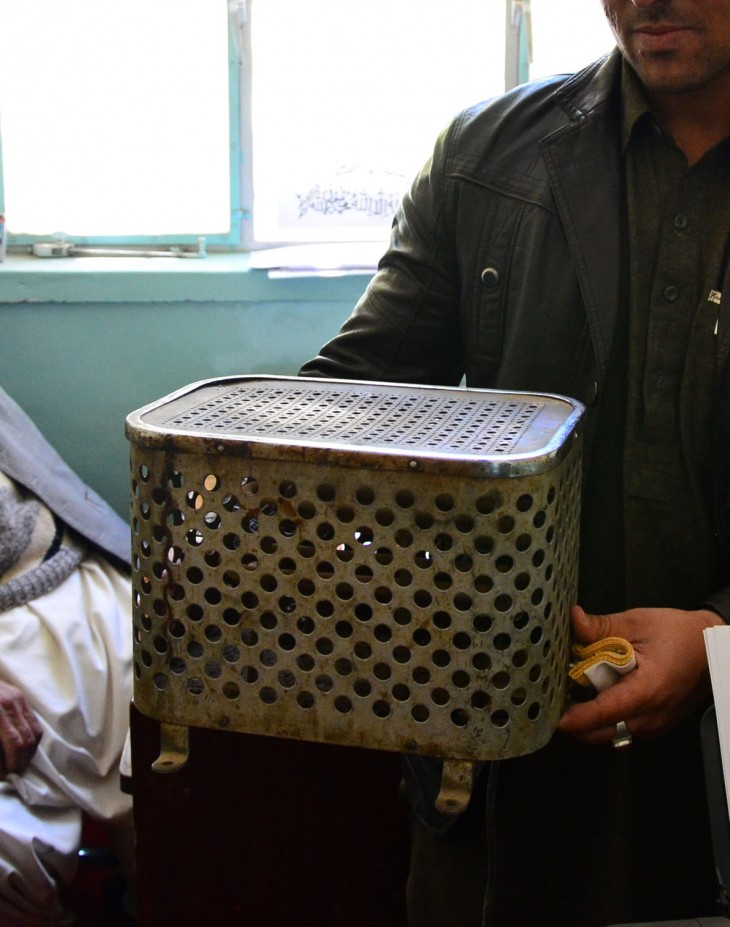 Architecture in the hospital takes on a familiar Chinese styles. Many Chinese elements remain until today. For example, the heating system, although it has been abandoned, some are still preserved intact, and can function properly. CC BY-NC-ND/ICRC/Shuangfeng Zhang 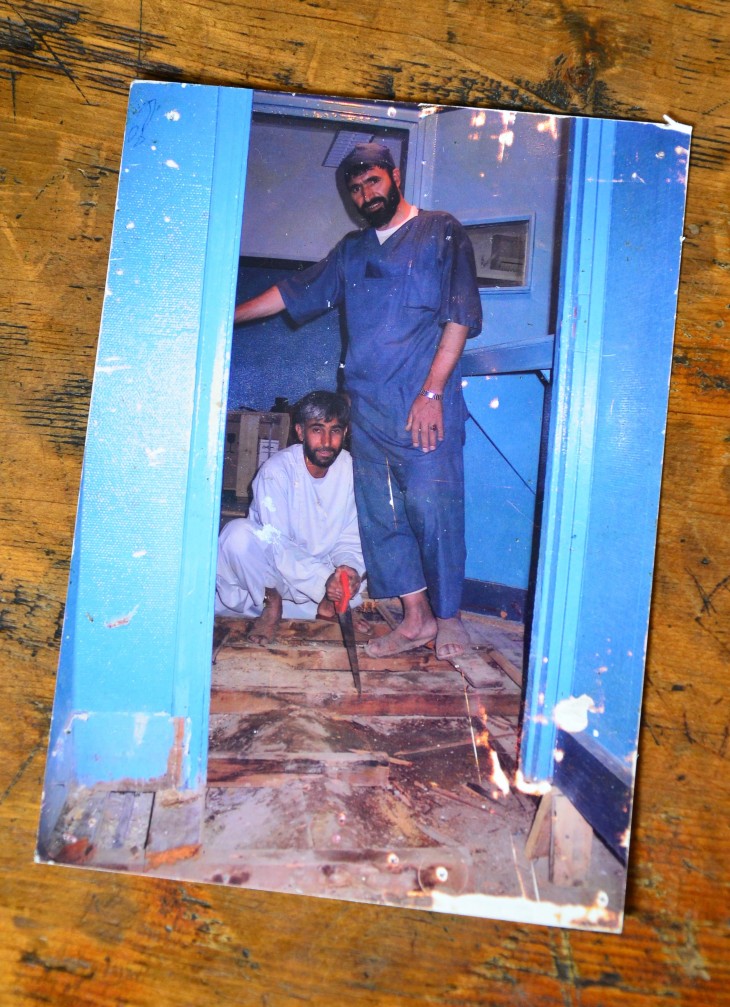 In 1975, 'the Chinese Hospital' was officially opened to the public. But the ensuing wars brought endless suffering not only to the local residents, but also to the hospital. A staff who worked here for decades told us that at once the hospital became the battlefield of crossfires. In the hospital corridors, marks left by a heated battle was still visible. CC BY-NC-ND/ICRC/Shuangfeng Zhang

The person in charge of the X-ray unit in the hospital showed us several photos taken prior to the hospital's renovation. With great excitement, he described the intensity of the battle that once happened here. He pointed to one side of the window and said: 'at that time, a rocket came right through here and landed on this wall.' 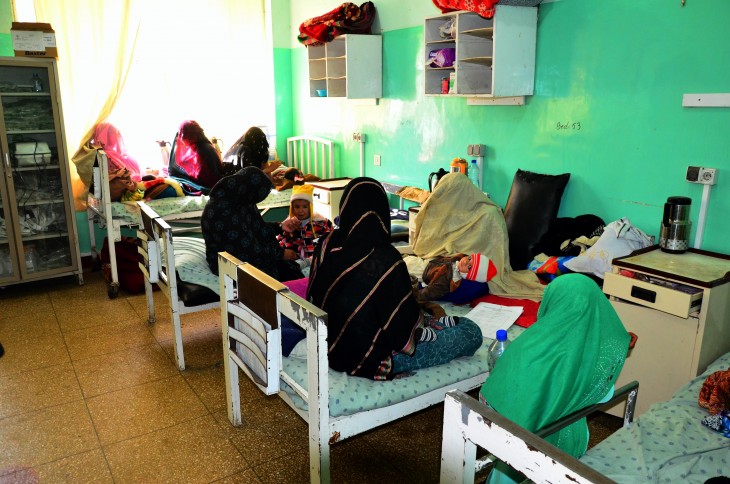 Many facilities in the hospital were destroyed in the battles, once it even completely halted its operation. CC BY-NC-ND/ICRC/Shuangfeng Zhang

Although parts of the building were damaged after long time of internal conflicts, the main structure remain functional. In 1996, ICRC started its assistance to this hospital. The organization has not only renovated the damaged buildings and facilities, but also provided medical equipment, medicines, materials and staff training. Assistance to this hospital is a work priority for ICRC's delegation in Kandahar which has a medical team of 20 staff who travel between the hospital and the delegation almost on a daily basis.

If we have to say there are some regrets, those would be that no Chinese medical staff have ever worked here. The locals call it 'the Chinese Hospital', maybe not only because it was built by the Chinese, but also to express a wish and expectation.

Latest data from ICRC shows that in 2014, the Mirwais Hospital is estimated to have admitted more than 260,000 patients of various kinds. That is to say that more than 700 people came for medical treatment on a daily basis. A comparison will make this figure more illustrative. The hospital serves close to 7 million population from 4 provinces, while it only has 7 departments with more than 400 beds and less than 500 staff. One staff commented, 'this is really the world's busiest hospital.'

Obstetrics and gynecology department might be the busiest department in this busiest hospital. ICRC statistics show that in 2014, it has delivered more than 17,000 babies, i.e. more than 1,400 babies per month. This were done in A department that has only 46 beds, 8 obstetric tables, and two operation tables.

The biggest difference between the Mirwais Hospital and other general hospitals is its war surgery department, which is indispensable in a region plagued by frequent conflicts. A great number of patients in the department were injured by unfortunately stepping on landmines or having triggered the IEDs. In comparison with the pediatrics department, the scenes here are more frightening. On that day, in the ICU, we met a young man of only 19 years old, who was heavily wounded by gunshot. We thought we could come back to talk to him after his situation improved. However, on the same morning, we were told that the doctor eventually failed to save his life because his injury was too serious. We no longer had the chance to talk to him.

The war surgery department received many patients wounded by the IEDs. Many of them are children at school age like the one shown in the picture. 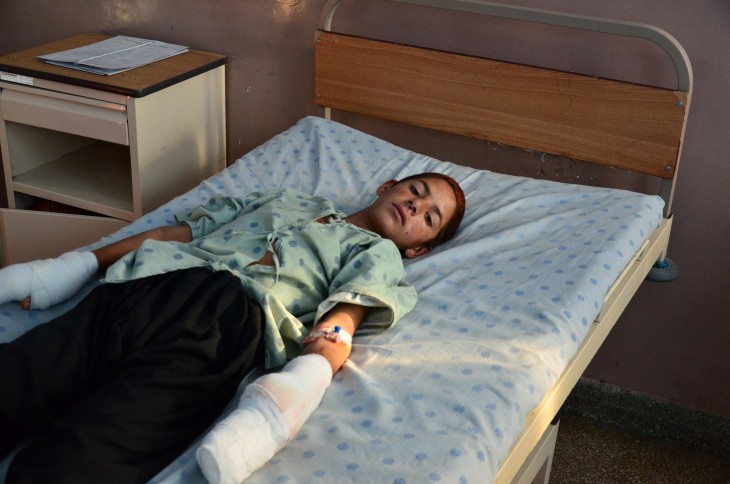 November, 2014, Kandahar, Afghanistan, Mirwais Hospital, war surgery ward. A 13 year old boy is lying helplessly on the bed. He triggered an IED when cutting grass and injured his hands. All what we could do is give him some candies, and hope he will recover soon to go back to school. CC BY-NC-ND/ICRC/Shuangfeng Zhang

IEDs have brought big troubles to the local residents, many of whom were injured or killed. 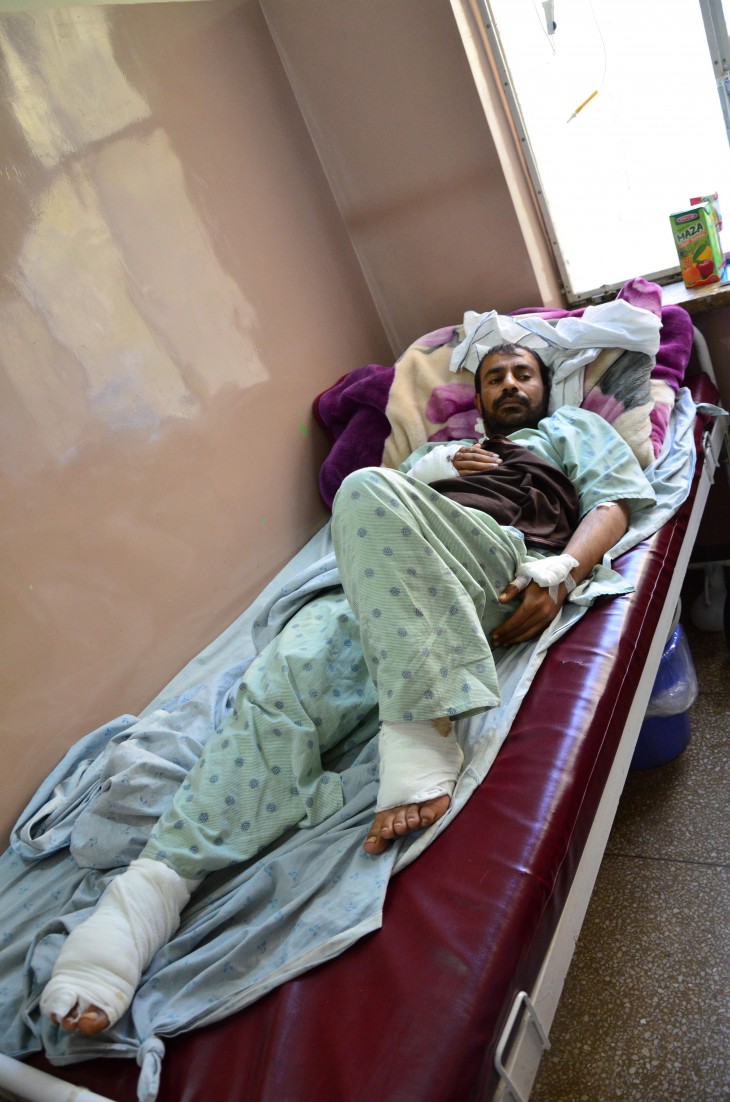 This man was injured by a IED. He said he was driving and the device was glued to the car's door at the driver's side. Fortunately, his family members who were in the car were safe. CC BY-NC-ND/ICRC/Shuangfeng Zhang 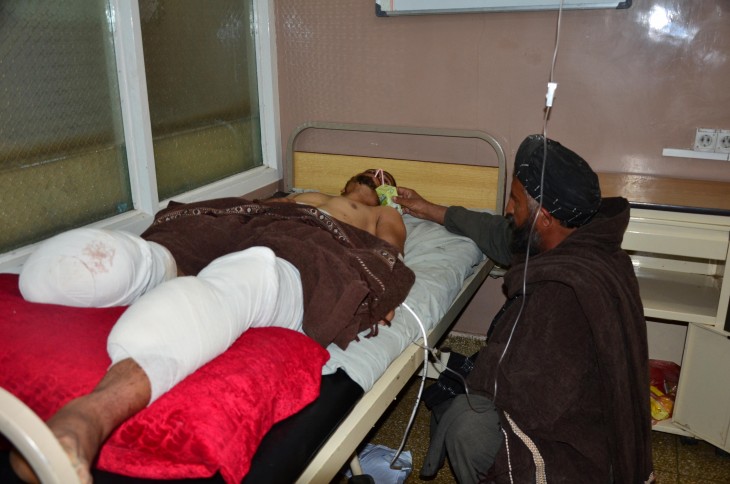 This young man was injured by stepping on a landmine. His right leg was amputated. His father squats by his bed and feeds him the juice. He looks very helpless. CC BY-NC-ND/ICRC/Shuangfeng Zhang

Taking into consideration the local traffic and security situation, being able to make it to the Hospital would be considered lucky, although it would often take several hours on a bumpy road. Poverty and lack of transportation means are a big obstacle for the locals to access medical services, which resulted in many patients living in remote regions unable to come to the hospital in a timely way, the best treatment time being missed, and many wounded even lost their lives on the way before reaching the hospital.

The local security situation is coupled with the hospital's lack of sufficient ambulances. In addition, frequent attacks against medical vehicles and staff made the situation even worse. In order to improve the transportation of the wounded, the ICRC has come up with a new solution– using taxis.

Starting in 2009, each year, the ICRC tests and selects about 50 taxi drivers, and provide them with 3-4 days of training. Some first aid medicine are also distributed to them on a regular basis. As the Mirwais Hospital covers a wide region, depending on different seasons, it may take up to 8 to 10 hours of drive to reach the hospital from the remotest region. This requires that the drivers first provide first aid on the wounded, otherwise it is very likely that when the wounded reach the hospital, it would be too late to save their lives. Therefore, this kind of training is critical for life saving.

The program is entirely voluntary. ICRC compensates the drivers based on the distance they travelled.

To join this program seems to be financially beneficial for the drivers, but in fact for them the risk is very high to transport the wounded. They may also suffer big psychological pressure during the journey. Although they hold a document issued by the ICRC, still they have to pass many checkpoints, where sometimes the document is denied and they receive all kinds of questioning, hostility or even lose their life. Not long ago, one driver was killed in the neighboring Helmand province.