After years of no news, a family is reunited with their son imprisoned in Panama 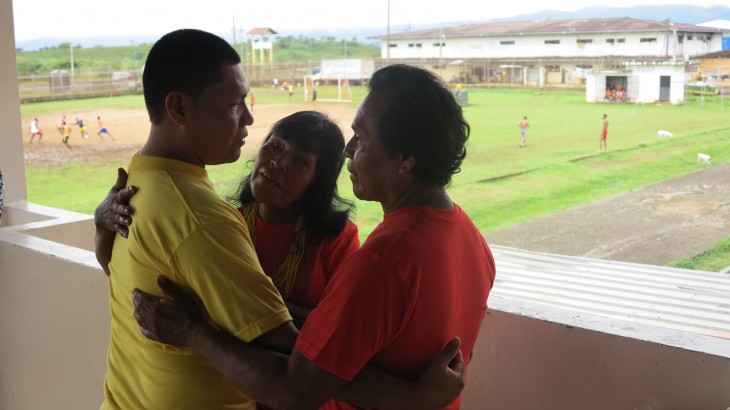 For many years, Antonio was just another statistic for the society and the Panamanian penitentiary system. Tried and convicted, with no identity documents, he got lost among the 17,000 or more people deprived of their liberty in Panama at the time. Throughout this period, his family lived with the uncertainty of his unknown fate.

Antonio's family, from Matugantí, lost all contact with their son in 2010 when he was transferred from the province of Darién to a prison in the country's capital, more than 352 kilometres from his home community. After seven years of separation and no news, Antonio and his family have been reunited.

Ubaldina and Oristo, Antonio's parents, embarked on an adventure into the unknown, spurred on by their trust in the ICRC staff and the hope of seeing their son again.

Ubaldina is an Emberá-Wounaan indigenous woman born in Colombia who has lived all her life in Darién. The tough, quiet, distant lady has a far-away look in her eyes. Her body language shows signs of anxiety as she awaits the reunion with her son. Oristo, more relaxed and communicative, waits by her side.

Tense and formal to begin with, the reunion gradually became more relaxed as the conversation developed and shy displays of affection were shown. For two hours, the family caught up on each other's news. Antonio described his court case and details of his life in prison while his parents told him about his children, how much they had grown and what their lives were like.

It looked like the farewell would follow a similar pattern until, in the moments before leaving the prison, Ubaldina turned back to her son and gave him an emotional hug. Finally they parted, but this time with the certainty that they would see each other again very soon.

Antonio's parents were granted special permission by the prison authorities to visit him. The centre's authorities and the ICRC arranged the meeting. Hogar Luisa, a shelter for migrants, hosted them during their stay in Panama City. The ICRC provided them with basic hygiene supplies and gave Antonio a hammock as a gift.

During a medical brigade event, Antonio's family told the ICRC staff – without much hope – about their desire to find out about their son's situation and his whereabouts. The information they were able to share was minimal – just his name and that he was 25 years old when he was arrested.

With this information, the ICRC sought support from La Joya penitentiary complex's authorities to locate him. The search was very difficult as prison records are filed by ID number and Antonio was not registered at birth.

It took two months to find him and the way it was done was by spreading the word in the cell blocks. The search ended when the director of La Joya told the ICRC that they had located him. Four months after submitting the request for the search, the family were reunited.

From cell block 15, Antonio dictated a message for his mother to one of the ICRC's staff. His family received it and sent a reply along with some photos of his children, aged nine and ten. When Antonio was arrested, the youngest was one year old.

The ICRC is supporting Antonio and his family with the transfer and visiting process. In addition, we are helping him get his identity documents, which will be necessary upon his eventual release. 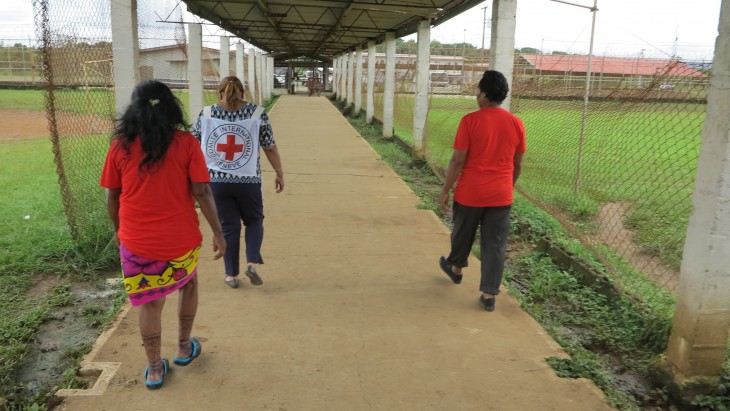 To get back home to Matugantí, Ubaldina and Oristo will have to travel for 12 hours by land and river. This is the same journey they made for the long-awaited visit. CC BY-NC-ND/CICR/M. Rodríguez

The role of the ICRC

The ICRC helps to put family members of inmates such as Antonio back in contact through calls, Red Cross messages or visiting programmes, in order to relieve the suffering of relatives and detainees. Red Cross messages are hand-written messages that may be described as "brief messages containing family news", "brief personal messages to relatives made otherwise unreachable by armed conflict [or by events]", etc.

This family reunion was made possible thanks to the ICRC's community programmes and the Panamanian Red Cross in Darién. Both organizations have worked in Darién for 20 years, providing health care, housing improvements, access to safe water and hygiene sanitation for those displaced by the Colombian armed conflict and for the communities that gave them shelter.