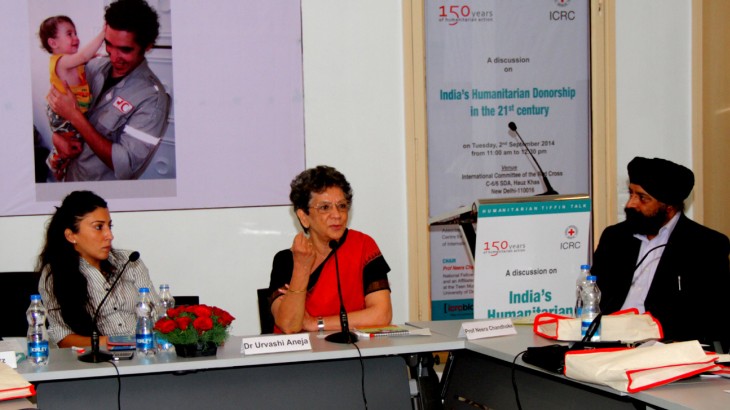 Taking a step forward, in 2012, the Indian government also launched a coordinating and monitoring body for Indian foreign assistance within the Ministry of External Affairs called the Development Partnership Administration (DPA). Aimed to evolve as a full-fledged aid agency, the formation of the DPA is widely recognized as an encouraging step for the decentralized and fragmented Indian aid programme.

Even as much of India's aid money goes to immediate neighbours — Bhutan, Afghanistan, Bangladesh, Myanmar, Nepal, Sri Lanka and the Maldives, India has also extended the reach of its assistance well beyond South Asia.

The rise of India as a donor country has also augmented its humanitarian contributions. "India has the potential to match its global aspirations in humanitarian action. The country's reputed domestic disaster response and generous development budget would allow for a more significant humanitarian engagement", wrote Andras Horvath of Global Public Policy Institute in a research paper titled, "India as a Humanitarian Donor in the 21st Century: The Seeds of a more ambitious role".

To discuss and highlight the emergence of India as a humanitarian donor, the ICRC New Delhi delegation had a stimulating discussion on the same topic (details below) where experts shared their views.

The ICRC regional delegation in New Delhi started a series of informal discussions aimed at initiating dialogue and sharing experiences on opportunities and challenges pertaining to the humanitarian system. Titled as Humanitarian Tiffin Talk, the first in the series was held in the office of the regional delegation in New Delhi on 2nd September and attended by more than 35 participants representing international humanitarian organizations, academia, media, the Red Cross movement as well as other stakeholders.

The topic for the first talk was –"India's emerging role as a humanitarian donor in the 21st century", where Dr Urvashi Aneja, associate professor of international relations and director of the Centre for Global Governance and Policy at the Jindal School of International Affairs, OP Jindal Global University, Haryana spoke on the topic. Professor Neera Chandhoke, national fellow at the Indian Council of Social Science Research, graciously chaired the session. Dr Aneja spoke on the history of India's development assistance; India's humanitarian assistance; the drivers of Indian foreign policy and how this translates into India's understanding of humanitarianism and its implications for India as a donor in the 21stcentury. The talk was followed by a question-and-answer session open to the audience in which Dr Aneja answered questions ranging from the motivation behind India's humanitarian aid policy to what could be the way forward for India, especially in South Asia.

The ICRC continues to host a series of tiffin talks. While the second talk discussed International Humanitarian Law and Cyber Warfare, the third talk held recently in the first week of November was titled Saving the Saviours: a humanitarian regime under attack. To know more about the talks log on to our blog.