AU and ICRC call on states to respect the Anti-Personnel Mine Ban Convention, the Convention on Cluster Munitions and other relevant treaties 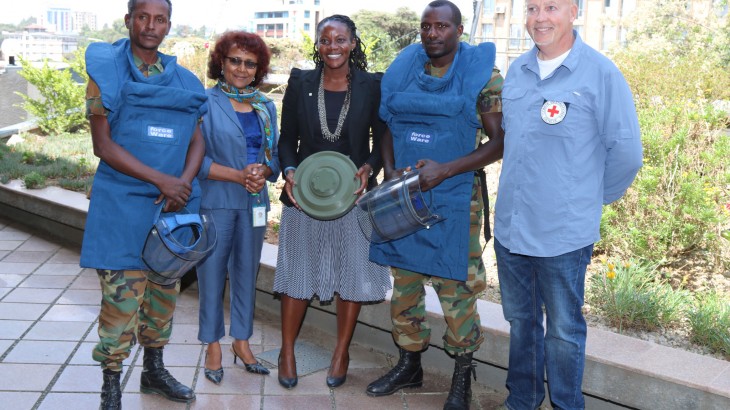 The ICRC is placing the spotlight on the impact of explosive hazards on civilians and other victims of armed conflict. CC BY-NC-ND / ICRC / Orlando Bama

For the fourth year in a row, the African Union Commission (AUC), and the International Committee of the Red Cross (ICRC) jointly commemorated the International Day for Mine Awareness and Assistance in Mine Action on 4 April 2017, at the AU Headquarters. In line with this year's theme -- "Needs Driven. People Centered" --, the ICRC conducted an awareness session for AUC staff members working in environments that may be exposed to explosive hazards and landmines.

With the increasing rate of deployment of AU staff in humanitarian assessments missions, response to disease outbreaks, elections observation in rural areas, and activities in post-conflict reconstruction and development contexts, the session provided by the ICRC's Regional Weapons Contamination Advisor for Africa and the Ethiopian National Defense Force Explosive Ordinance Disposal Team was very much appreciated in the remarks given by the Acting Director of the AU Peace and Security Department, Dr. Admore Kambudzi.

The Deputy Head of the ICRC Delegation to the AU, Ms. Haja Kamara, highlighted the opportuneness of Mine Action Day to raise awareness with the AU and its member states on the humanitarian consequences of mines and other explosive hazards which are the tragic legacy of armed conflicts and other situations of violence.

On this occasion, the AUC and ICRC made a joint call on AU Member States to spare no effort in fulfilling their obligations pursuant to the Anti-Personnel Mine Ban Convention, the Convention on Cluster Munitions and other relevant treaties; and on international partners to renew their commitment and allocate the necessary resources to assist the continent in becoming free from landmines and explosive remnants of war.

The two institutions, placed the spotlight on the impact of explosive hazards on civilians and other victims of armed conflict, and the necessity to disseminate, prevent, and provide appropriate remedies. The event also showcased the collaboration between the AUC and the ICRC towards implementation of the AU Mine Action and Explosive Remnants of War (ERW) Strategic Framework 2014-2017, through which both have provided support to AU member states in addressing the weapons contamination problematic in Africa.

Weapon contamination, is caused by mines and 'explosive remnants of war' like unexploded bombs, shells and cluster-munition bomblet that continue to kill and main, even after the conflict ends. Weapons contamination deprives people of water, firewood, farmland, health care and education and it impedes relief work. It also impedes relief work, depriving people of humanitarian aid and aggravating humanitarian problems.

The ICRC, in order to prevent accidents and reduce the effects of weapon contamination, responds by combining information management; risk awareness and the promotion of safer behavior; risk reduction (through the mobilization of other ICRC Assistance or Protection capacities) and survey and clearance.

Commemorating International Mine Awareness Day with @AU_PSD, calling for a Mine Free Africa pic.twitter.com/k3wDSKhVKG