Australia: Working with militaries to ensure humane treatment of detainees 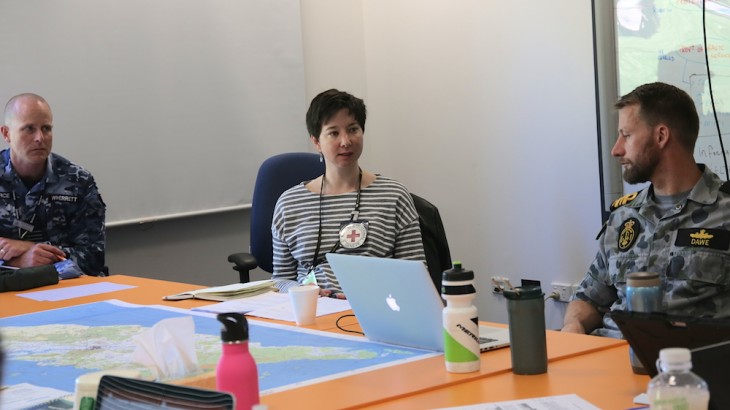 Detainees are among the most vulnerable populations in armed conflict situations. Amid the violence and volatility of war, they are in danger of disappearing, of being tortured, mistreated and may have to endure inhumane living conditions and loss of contact with loved ones.

As part of its mandate under international humanitarian law, the International Committee of the Red Cross (ICRC) works to ensure that all those involved in detaining individuals in situations of war treat detainees with humanity and dignity.

To this end, the ICRC recently took part in a military exercise at the Australian Command and Staff College in Canberra, which explored a range of scenarios relating to conflict situations, including the detention of prisoners of war, civilian internees and security detainees.

The three-day exercise, involving 180 Australian Defence Force and international personnel from 22 countries, exposed participants to the work of non-military actors who operate in war zones, such as humanitarians, police and government officers.

Throughout the week, the ICRC explained how it works with militaries around the world, in situations of conflict and violence, to ensure that detainees are treated with dignity and respect. It highlighted the need to consider, during the planning phase, the processes and procedures for the capture of members of opposing forces on land and at sea. During 2015 alone, almost 1 million people benefited from the organisation's visits to places of detention.

Among other things, the ICRC's visits aim to prevent torture and other forms of ill-treatment; prevent and resolve disappearances; improve conditions of detention; restore family contacts; and ensure respect for legal safeguards.

According to ICRC Pacific regional detention delegate Adam Aboshahba, the exercise was an important opportunity to expose an entire cohort of military officers to the mandate and working methods of the ICRC. "Being part of the training, and speaking to members of the armed forces in a relaxed setting is the perfect opportunity to show them that the ICRC is not "the enemy", that we are not there to criticise, but in fact, to assist them in carrying out their duties correctly, and that IHL and other relevant international laws are not incomprehensible theories, but very practical and rather flexible tools."

More information on how the ICRC works with people in detention is available here.