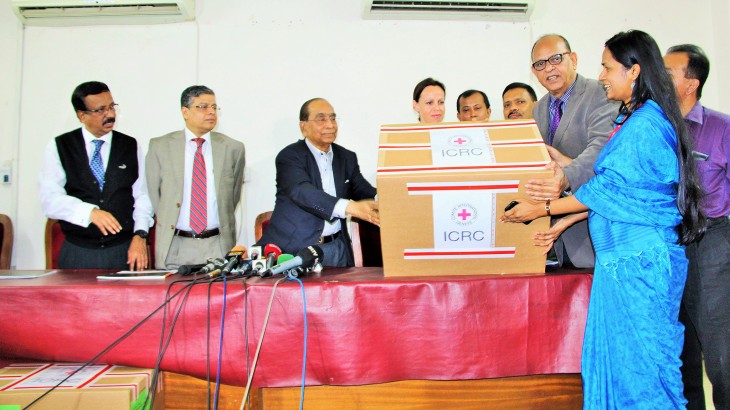 Ten sets of medical dressing kits are being handed over to Burn Units in Dhaka. The kits will benefit over 600 minor or 100 seriously injured burn patients. CC BY-NC-ND/ICRC

"Please, pray for me so I can recover soon. I have just started my final exam." These were the only words Hafiza Shikder Kuntala could whisper lying on her bed at the Burns Unit of Dhaka Medical College Hospital after suffering severe burns.

On one fateful night, Kuntala (24) and her relatives were returning to their home in Dhaka when the bus they were on was firebombed. Instead of home, they ended up in the Burns Unit of Dhaka Medical College Hospital (DMCH). The young law student had suffered severe burns to her face and body.

Kuntala and her cousin are just two victims of continuous political violence across the country since the beginning of the year, during which more than 100 people have been killed and thousands have sustained injuries in arson attacks.

The most critically injured receive treatment at the DMCH Burns Unit, which is able to provide treatment for 150 patients while the hospital's intensive care unit has a capacity of just ten beds.

Dr Samanta Lal Sen, honorary adviser to the Burns Unit, said: "In early March some 50 people, including women and children, were still undergoing treatment," adding, "Over the last two months 158 injured people have received care, 94 of whom have already returned to their lives after being successfully treated,"

To help address some of the humanitarian consequences of the politically motivated violence, the ICRC recently provided the Burns Unit with medical dressing kits which will benefit over 600 minor or 100 seriously injured patients suffering burns.

During the brief ceremony at which the ICRC donation was made, His Excellency H.T. Imam, Honorable Political Adviser to the Prime Minister said: "We appreciate the support received from the ICRC. On this occasion I want to reiterate that the government is all set to establish a fully fledged Burns Institute that will be capable of handling the increased number of burn victims."

Ms Christine Cipolla, head of the ICRC delegation in Bangladesh, said: "We are committed to continue supporting the institutions and providing immediate humanitarian response to the people affected by politically motivated violence. As victims are at the centre of our humanitarian action, reducing unnecessary suffering is part of our endeavour." She added: "In volatile situations, respect for Bangladesh Red Crescent Society first aid providers and Red Crescent and Red Cross emblems is essential."

In Bangladesh, the ICRC, as a humanitarian, neutral, independent and impartial organization, strives to protect and assist people affected by politically motivated and inter-communal violence.

For more information: ICRC activities in Bangladesh in 2014 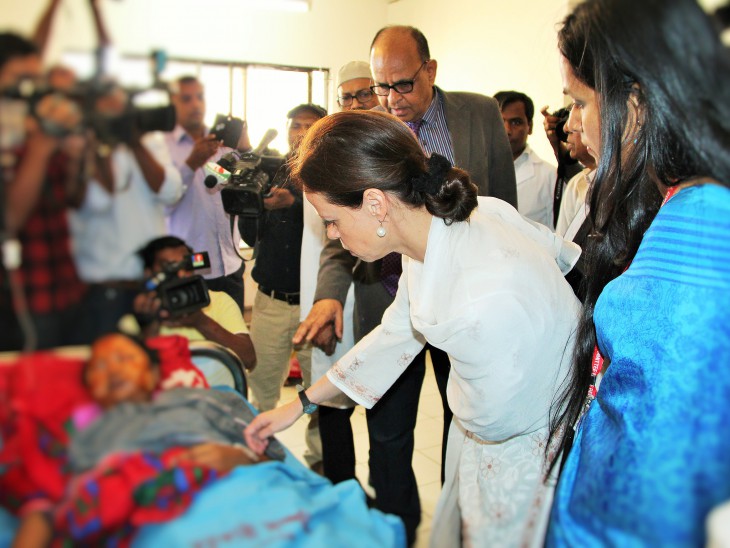 Christine Cipolla, head of the ICRC delegation in Bangladesh, visits Hafiza Kuntala Shikder, one of the arson victims, accompanied by the honorary adviser of the Burn Unit, Dr Samanta Lal Sen. CC BY-NC-ND/ICRC