Being displaced in Zamboanga, three years on 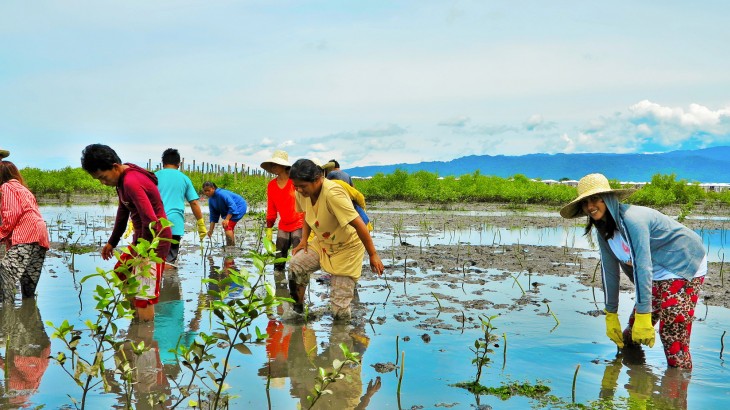 An estimated 30,000 mangrove seedlings were planted by these cash-for-work beneficiaries on a vacant 3-hectare site along the coastline of Barangay Kasanyangan. The seedlings were sourced from the nearby mangrove forest. CC BY-NC-ND / ICRC / R. ANG

Three years after the armed hostilities between government forces and a faction of the Moro National Liberation Front in Zamboanga City, around 13,800 people still live in temporary shelters in 11 transitory sites. Meanwhile, around 2,100 families have moved to permanent houses, according to the latest data from the City Social Welfare Office.

Ben Bandahal and his family live in one of the stilt houses in the Kasanyangan transitory site, which is 3 km from the city center. He shares how displaced families continue to cope with the challenges they face in the Kasanyangan site.

"While the temporary shelter here in Kasanyangan is better than living in a tent, access to piped water and to electricity is not available. We have to buy water, while the damaged electric lines have not been repaired since June. I hope the authorities will take action," said the father of five children.

Ben used to earn decently from a sari-sari ("variety") store and a small eatery he owned in Barangay Rio Hondo, where they also lived in a stilt house. When the armed clashes struck in September 2013 and affected Rio Hondo, Ben's family sought shelter at the Joaquin Enriquez Memorial sports complex, then the biggest evacuation center for displaced people.

Finding the situation very difficult for him and his young children, Ben decided that his family should leave the stadium and used his savings to rent a house in Barangay Calarian, 7 km from the city center. His family was still displaced—only now they were "home-based" as opposed to those who remained in the evacuation centers. 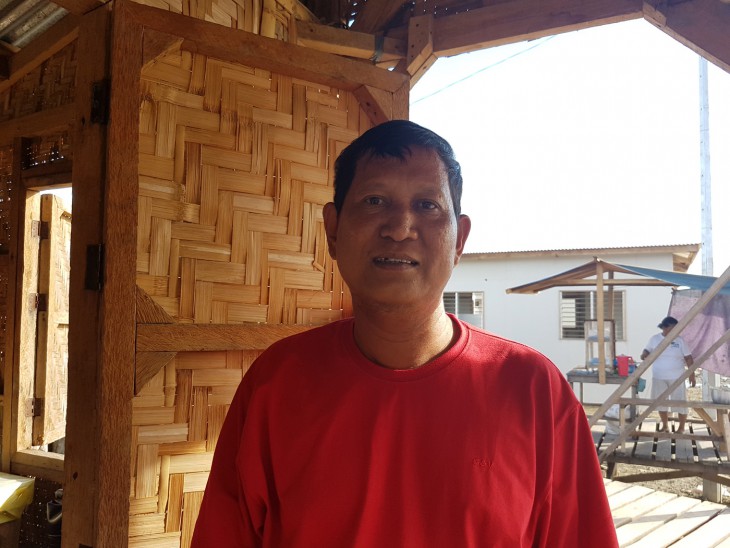 "I was very grateful for the cash assistance I received from the Red Cross back then. It enabled me to cover our needs. The Social Welfare Department also gave financial aid to pay for our house rent for six months. After that, I shouldered the cost of the rent," he said, adding that his youngest child, whose nutrition suffered as a consequence of their displacement, benefited from a Red Cross feeding program in 2014.

Then in June 2016, Ben asked local officials if his family could move to the Kasanyangan transition site, as it was closer to the city center, where he sells accessories like sunglasses and bracelets. Earning less than PhP 5,000 a month, he needed to lessen the transportation costs of his school children. Still, his income is hardly enough to sustain the needs of the family. Many other displaced families face the same situation after their lives were thrown into disarray in 2013.

To help the displaced families in Kasanyangan, the ICRC, with the support of the Philippine Red Cross, implemented a 10-day cash-for-work program in July 2016 to provide temporary income and at the same time address the needs of the community. 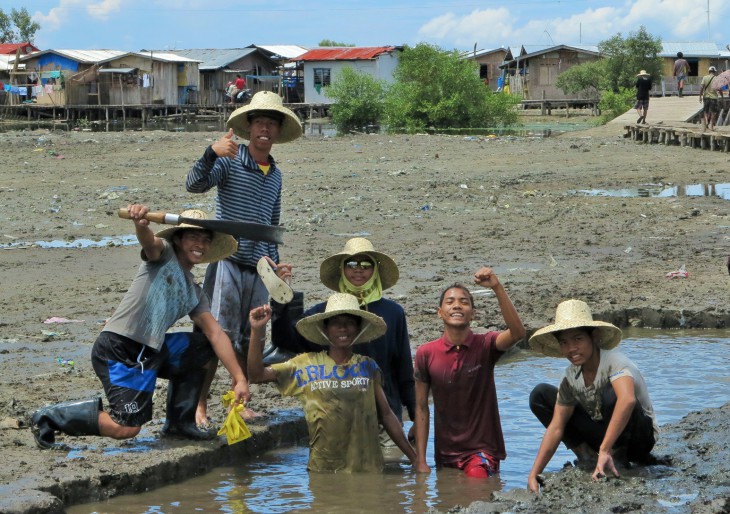 Before taking their lunch break, a group of beneficiaries building the earthen dike footpath pose for the camera. Thirty displaced people and six local residents participated in this cash-for-work project in the Kasanyangan transitory site. CC BY-NC-ND / ICRC / R. ANG

"The mangroves will not only help increase the population of marine life, they will also protect the community from possible storm surges. We also created a 300-meter earthen dike as an alternative pathway, since it was difficult for us to reach the main road, especially when the tides are high," said Ben, who took part in the mangrove-planting project.

The mangrove planting was participated in by 60 displaced people and residents, mostly women, who planted nearly 30,000 seedlings. A similar project was done last year at an adjacent site. Local leaders reported that nearly all the seedlings that were planted last year were thriving.

On the other hand, the creation of the earthen dike benefited 36 people. Freddie Padios, a seasoned earthen-dike maker, supervised the activity. 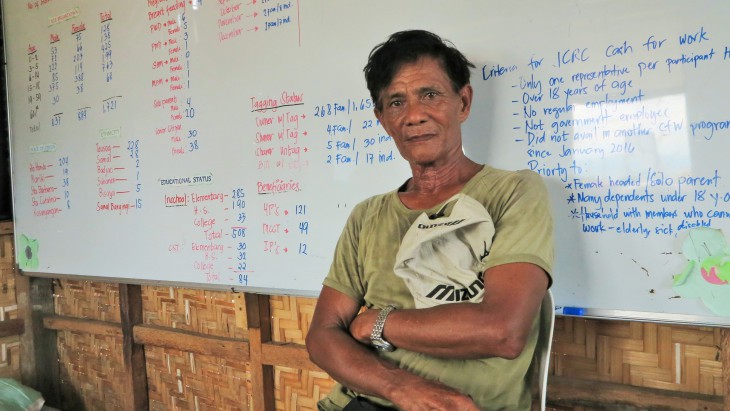 "Directing and supervising dike-making is not easy. You must know the right mixture of mud and clay, the length and width of the dike itself, and the correct method of piling. If done properly, this dike we built will serve the community for 5 to 10 years," he said.

The income received by the beneficiaries from the projects was used mostly as seed money to start micro-businesses, while the remaining amount was spent on household needs.

From the emergency phase until 2016, the ICRC implemented cash-for-work activities in the various transition sites in Zamboanga to help provide income for displaced families and improve the communities they live in.

"We continued our aid for people who were displaced by the clashes in 2013, as there are still needs. We provided vocational training and helped improve their living conditions through community projects," said Yann Fridez, head of the ICRC subdelegation in Mindanao.

"We hope that at the soonest possible time, the authorities will be able to resolve the various challenges these displaced families have been facing for three years now," he said. 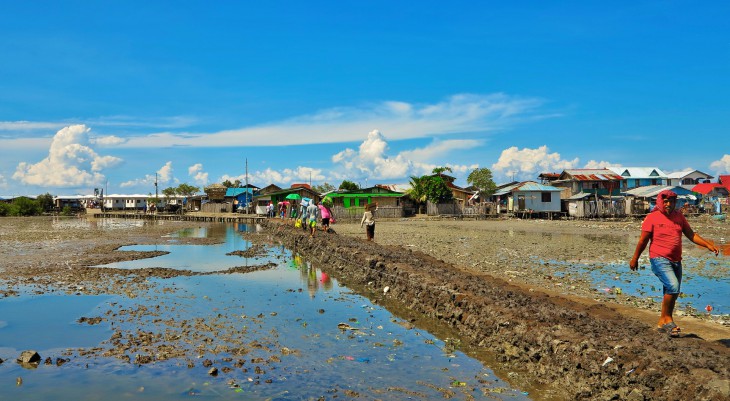 After 10 days of work, the earthen dike footpath was completed and has since improved access for Kasanyangan residents to the main highway during high tide. The new facility will serve the displaced families in the transition site and the neighboring community for years to come.