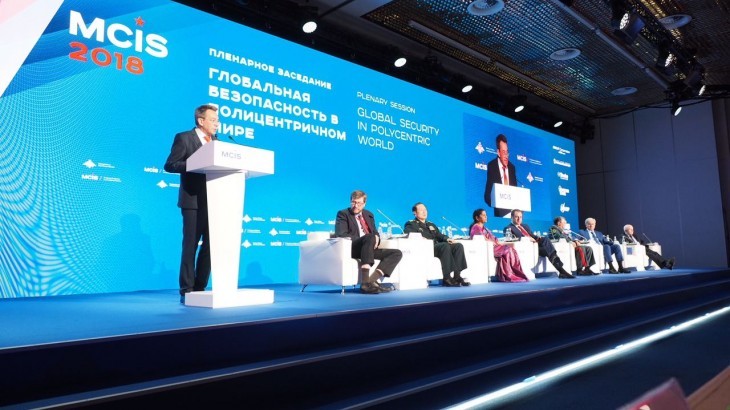 Speech given by Mr Peter Maurer, President of the ICRC, during the Conference on International Security in Moscow

When I became ICRC President in 2012, countries in the broader Middle East were experiencing a fresh wave of instability and violent unrest. Since then the humanitarian costs in the region have been vast as unrest and violence in Libya, Syria, Iraq and Yemen have spiralled into fully-fledged armed conflict, while other countries were exposed to the impact of war and fell themselves partly into political unrest.

Today, four out of five of the largest operations of ICRC are in this region, including the long-standing conflict in Afghanistan. In March I travelled across the Middle East where I saw first-hand the continued devastating impact of conflicts on civilians which have become more entangled, regionalized and difficult to solve.

The regional and global dimensions of these conflicts are of serious concern, as the dynamics are less and less conducive towards political solutions. Instead they can they can trigger new layers of conflict on top of the existing protracted ones… As we speak here today, are we one miscalculation away from a new conflict in the region? We hope not.

These conflicts cannot be dissociated from global affairs, they are both the result and the fuel of regional and global power competition and involvement. In my plenary address earlier today I reflected on the global trends of violence and conflict in a poly-centric world.

And these trends are sadly only all too present in the Middle East:

These are complex, entrenched dynamics, and it is almost impossible to envisage a more positive future. In the absence of political solutions, the ICRC works through our basic mandate and status as a neutral, impartial and independent organization to:

ICRC’s approach is to seek positive dynamics and interactions between our legal mandate, our operational work in the field and our engagement with all belligerents, States as High Contracting Parties to the Geneva Convention first and foremost.

In the Middle East, the ICRC makes ongoing efforts to build relations and sustain dialogue with all parties to armed conflicts. The purpose of this dialogue is to secure not only acceptance for humanitarian action, but importantly also respect for the applicable law protecting persons in armed conflict or other situations of violence.

... wars of revenge are fought without regard for the impacts on civilians.

In recent years we have seen a rapid rise in armed groups that are horizontally rather than vertically organized. More armed groups have emerged in the last six years than the previous six decades. As research shows that violations of IHL are committed by both state and non-state parties to conflict, we must engage with all parties and foster dialogue amongst belligerents in order to change behaviors. We aim to carve out a humanitarian space through engagement on all sides of the frontline, which can help to provide practical solutions for people.

The ICRC also makes considerable efforts of reaching out to influential circles, including religious and community leaders and scholars, which enable us to better understand how value systems relate to the law of war, and to identify commonalities between those value systems and IHL.

When I reflect on the dynamics in the Middle East we are seeing conflicts spiralling into unending cycles of violence, where wars of revenge are fought without regard for the impacts on civilians. And in which the seeds of radicalization, retribution are being sown for future years.

My recent visit to the region, and on previous missions, confirmed for me the devastating human costs of indiscriminate warfare. Those I met have lost family members, homes and livelihoods. They are exhausted with the years of war and the way they see that it has been fought without mercy or humanity. They want their lives back: jobs, functioning schools, safety for their communities.

I saw how these wars are characterized by regular breaches of international humanitarian law: the way sieges are conducted, disproportionate attacks in urban areas, and the targeting of civilians and civilian services like ambulances, water stations and markets.

I grow increasingly concerned about the justification of gross violations against civilians. Human lives have the same value: the same in Ghouta as in Damascus, in Aleppo as in Mosul, in Syria as in Yemen. This suffering is exacerbated by a situation in which humanitarian workers are not allowed to do their jobs. I must reinforce that aid is not a political football and must not be part of the political process.

Across the region, we see the key challenges for the ICRC in working in these contexts are:

These are sobering challenges. The cost of the vicious circles of unbridled and boundless violence are too high. And the ICRC firmly believes that in this reality international humanitarian law is an incredibly useful, and potentially powerful, tool. As conflicts are increasingly protracted it becomes critically important to mitigate the damage of war, ending battles of retribution, radicalization, lessening the damage on civilian populations. The law provides a basis to win the peace and to set the foundations for community acceptance.

At the ICRC we are firmly convinced that IHL does not pose an undue obstacle to protect State security.

Today, from fully fledged military operations, to more light-footed security strategies and security approaches to fighting terrorism, the ICRC is increasingly involved in legal, policy and operational dialogues on the acceptable balances between military and security necessities and the protection needs of people as IHL prescribes.

It is critical that States strike a balance between their legitimate security interests and the protection of individuals during some of the most extreme circumstances. In order to do so we need belligerents to be ready to engage with us confidentially and to accept ICRC as a neutral intermediary and a partner to improve on finding the right balance.

This final point is of particular interest to me, as I repeatedly hear questioning on the applicability of the law. The usual narrative is: “The law is not applicable in a context of fighting terrorism” and “How can the law apply when the other side does not respect it?” We also see IHL increasingly viewed as a transaction: as an issue to negotiate among parties instead of an issue to comply with.

While these readings are understandable in the face of the shocking indiscriminate violence, I do not find these perspectives helpful. Questioning the adequacy of the law too often reflects an unwillingness to ambitiously adapt and apply time-tested rules and principles to modern challenges.  At the end the arguments boil down to the question, whether in the light of costs of conflict to societies, the respect of the law becomes a new necessity. Years of ill-balanced warfare in the Middle East has left populations and countries in ruin with the heavy physical reconstruction needs becoming another obstacle to reconciliation.

At the ICRC we are firmly convinced that IHL does not pose an undue obstacle to protect State security. It takes into account the security risks in armed conflict for which it was specifically designed. It offers guidance when confronted with dilemmas between humanity and military necessity. Getting this balance right is key.

Excluding IHL from being a useful guide in armed conflict today is often just moving the goalposts and advocating for unrestricted military force, which usually fuels the cycles of violence. Don’t get me wrong: nobody can close their eyes to the huge challenges of fighting armed radicalism today. But questioning the applicability and justification of restraining laws and principles is, unfortunately, too often becoming an excuse for unaccountable behavior and a departure from well-established military practice. As we have seen from other conflicts, battles can be won by unrestricted use of force, wars rarely can and peace and reconciliation cannot.

The fundamental challenge facing us today is not the relevance of IHL, but rather improving its implementation. The ICRC calls on States to ensure that the laws of war are systematically translated into improved behavior on the ground by parties to armed conflicts. The mere existence of the law is not sufficient to prevent future violations: it must be implemented on the ground.

IHL has changed war-time behavior over the decades. It has motivated actors in conflict to refrain from ill-treating detainees, from using banned weapons, from using landmines and from attacking civilians.

150 years ago in St Petersburg, Russia took a leadership role in convening other military powers, including its rivals, to prohibit a weapon which it had itself developed.  Military powers of today should take inspiration from this – to take the initiative, exercise leadership and work collaboratively to find solutions to today’s urgent humanitarian crises. The principles on which the St Petersburg declaration is based are more relevant than ever today, against the backdrop of brutal and protracted armed conflicts and rapid developments of new technologies of warfare.

I understand the reading of the law in today’s complex circumstances is challenging. In the Middle East the suffering runs deep, the conflicts are both old and new and political solutions seemingly out of reach.

The value proposition, the inherent benefit, of international humanitarian law is to promote behaviors that not only prevent the worst human suffering and devastation during war, but – precisely, by doing so – allow for reconciliation after the war. This is why we insist so much on getting three issues right in the Middle East: the humane treatment of detainees, clarifying the fate of the missing and making sure returns (of internally displaced people and refugees) are informed, safe and dignified.

ICRC is adapting to situations where it can be a pragmatic partner of governments and armed forces who are confronted with such challenges rather than a rigid, prescriptive guide. It is through in the conversation between arms bearers and the ICRC that we can hopefully find a way forward in defining best practices, which are offering better protection for people affected.

I hope my address has sparked further questions and reflections. I wish you a productive discussions and hope that this Conference will bring us one step closer towards greater respect for international humanitarian law and eventually the elimination of human suffering.