Voices from a forgotten conflict in Central African Republic

“We live in constant fear” 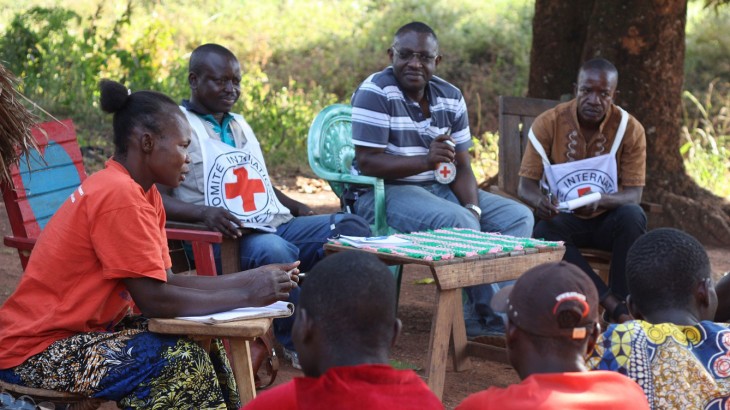 During a recent, week-long drive from Bangui to Paoua, we stopped at numerous villages to learn more about how people are coping with the effects of the fighting in Central African Republic. CC BY-NC-ND / ICRC / Jessica Barry

Up to a fifth of the Central African Republic's (CAR) five million population have fled their homes because of fighting or violence, and are today living as displaced persons or refugees. For those who have remained in their villages, life is a struggle to stay safe, to be able to work their land, and to keep themselves and their children healthy.

During a recent, week-long drive from Bangui to Paoua, we stopped at numerous villages to pay courtesy calls to each community and to learn more about how people are coping from day to day. Our trucks use the same route when taking household items, food and other assistance to the people affected by fighting in the far northwest of CAR.

"Your trucks drive past, leaving only dust behind," we had been told. It was a wakeup call for us to listen to people's concerns, to hear their perceptions of the ICRC, and to make ourselves better known.

The discussions we had were informal. More of a trust building exercise than anything else, and leading to invitations to return for more in-depth discussions in the future. 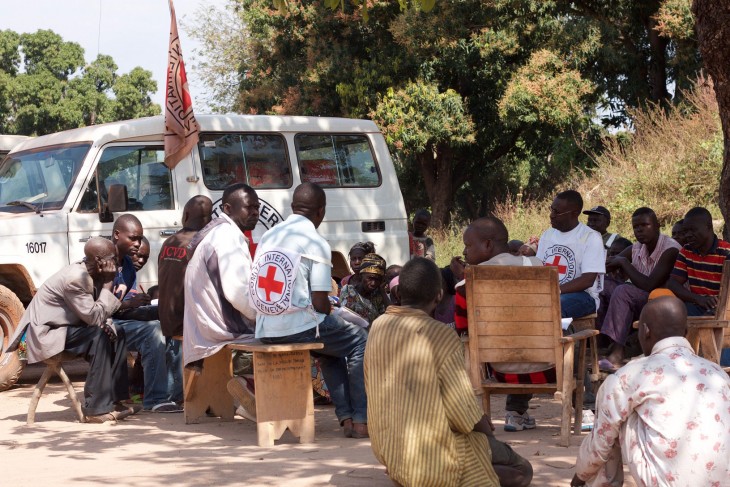 The discussions we had with community members were informal, more a trust building exercise than anything else, and leading to invitations to return for more in-depth discussions in the future. CC BY-NC-ND / ICRC / Jessica Barry

"The first contact is sometimes a little difficult but when we meet for a second or third time, we will know each other better and can go deeper into our concerns," said a traditional leader in Bandero.

"You are welcome to come back at any time and talk with our mothers, and young people and anyone else you would like to meet," said the village mayor in Pembe. 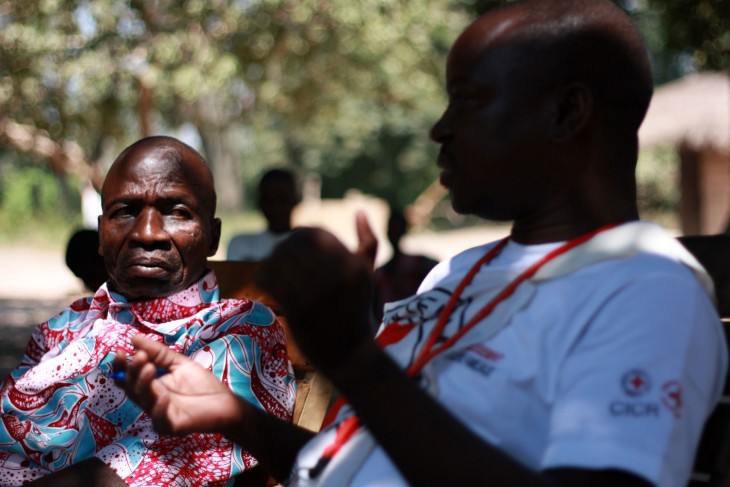 The village mayor in Pembe (left) invited us to return and talk to the mothers, young people, and anyone else we would like to meet in the village. CC BY-NC-ND / ICRC / Jessica Barry

"Now that we know you, we will not hesitate to stop your vehicles if we have information to share," said another village leader. "For example, if we hear of trouble on the road ahead, we can give you advance warning."

Each village encounter was enlightening in different ways. They helped to build a picture of how communities perceive the Red Cross, and how -- either through our own progammes or by referring them to other organisations -- we can better support people's efforts to cope with the challenges they face from day to day.

CAR is one the poorest and most unstable countries in the world. The 2013 crisis and widespread fighting that triggered the fall of the regime, a period of transition, and eventually presidential elections in 2016 led to the collapse of an already weak socio-economic infrastructure and basic services. The security situation also remains highly volatile as a result of ongoing fighting which is taking a heavy toll on the lives and livelihoods of the civilian population.

"We live in constant fear," an old lady in Beboura 3 village close to Paoua remarked, speaking in the local dialect. "When there is fighting nearby, we hide in the bush at night. We feel safer there than if we stay at home."

"We know that the Red Cross works in places where conflict is going on," said another woman. "We ask ourselves, is something bad going to happen when we see your vehicles go past?" 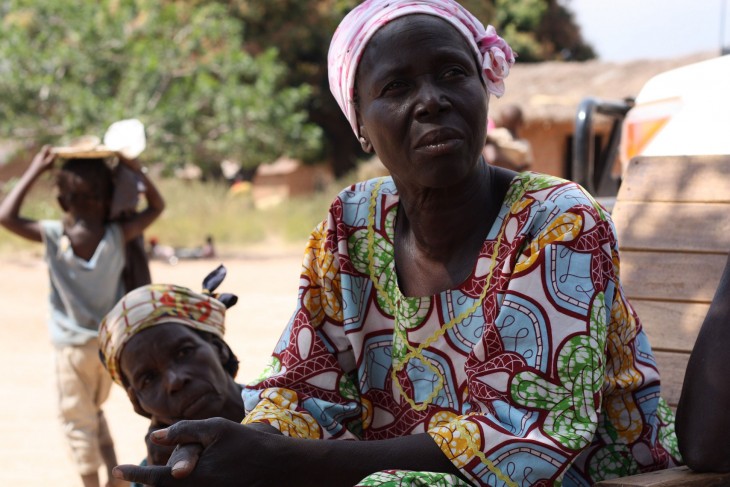 The mothers spoke to us citing their fears and concerns about the fighting. "When there is fighting nearby, we hide in the bush at night," said one lady. "We feel safer there than if we stay at home." CC BY-NC-ND / ICRC / Jessica Barry

In another village, it was the youth leader who shared his thoughts. "Before the crisis we used to have a football team, explained Valery Maxim. "But today all we young people do in the evenings is sit around and talk. Nothing is the same as it was before." 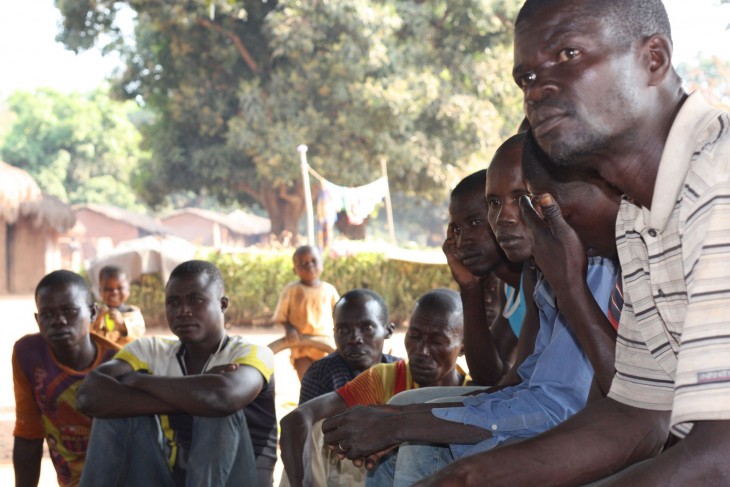 "Before the crisis we used to have a football team," explained Valery Maxim (right). "But today all we young people do in the evenings is sit around and talk. Nothing is the same as it was before." CC BY-NC-ND / ICRC / Jessica Barry

Sitting on the roots of a tree, around which the village had gathered, Maxim was nevertheless hopeful that with a little help, he and his friends could do more than talk. "If you could send a theatre troop here, or a dance group, we would all join in. Better still, if you could show us some movies it would make everyone happy."

It was not such a far-fetched idea as it might seem in this remote rural part of CAR where there is no electricity and the roads are little more than potholed, red laterite ribbons snaking through the forest. Some of the larger villages possess a communal generator, providing light on rare occasions when they have fuel.

In almost every village people lamented the lack of medical services and the scarcity of water. "

"There are 1,200 people in this village and we have only one water pump," explained Jean-Robert a traditional leader in Bogassa. "The mothers often quarrel when filling their jerry cans. They all want to go first." 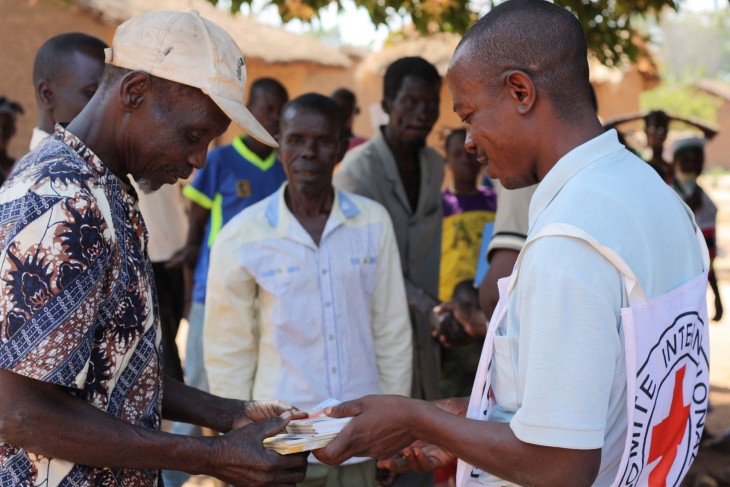 Jean-Robert, the traditional leader in Bogassa, explained that there is only one water pump for 1,200 people in the village. "The mothers often quarrel when filling their Jerry cans," he said. "They all want to go first." CC BY-NC-ND / ICRC / Jessica Barry

A young woman sitting nearby echoed his words. "I have to wait for hours before it is my turn at the pump," she remarked. "Instead I go to the river, but the water is not clean and I have to walk five kilometers to get there."

"If you could dig a well and install another pump, it would help us a lot," suggested Jean-Robert

In CAR, it is not only the men who are in positions of authority, but often women, too. Brigitte Marto, the deputy mayor of Angarakete village, wanted to talk about the problems facing pregnant women.

"Our health post is not equipped for emergencies," she said. "Recently, a woman in the village faced complications whilst giving birth and had to be taken to the nearest hospital, a journey of several hours on a motor bike over terrible roads. Sadly she lost the baby, but at least she is alive." 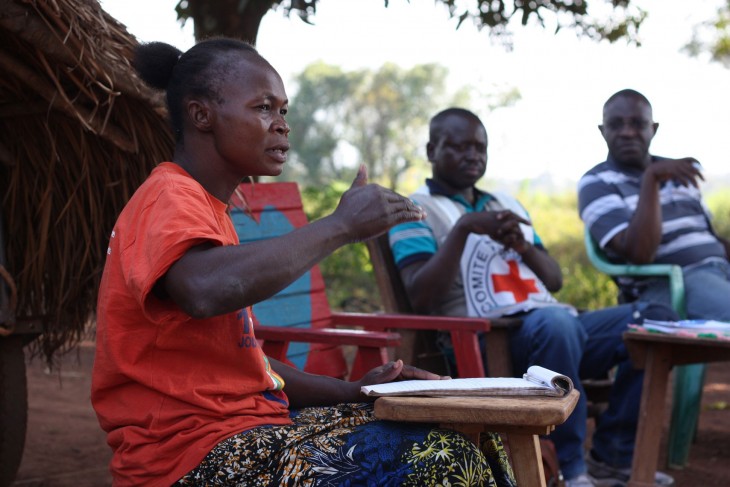 Brigitte Marto is the deputy Mayor of Angarakete village. She addressed the problems facing pregnant women. The main concern was the fact that the nearest hospital is several hours away over poor roads. CC BY-NC-ND / ICRC / Jessica Barry

This was a trip that underlined the very real struggle people in villages all over CAR are facing in a largely forgotten conflict, and one which affects every aspect of their lives.

Since this piece was written, widespread fighting has broken out in areas of the North West, including around Paoua. Tens of thousands of people have become displaced as a result. In December, following the initial surge of IDPs into the town, the ICRC together with the Central African Red Cross made emergency distributions of food and household items, and repaired water points in Paoua. Additional relief efforts are being planned.