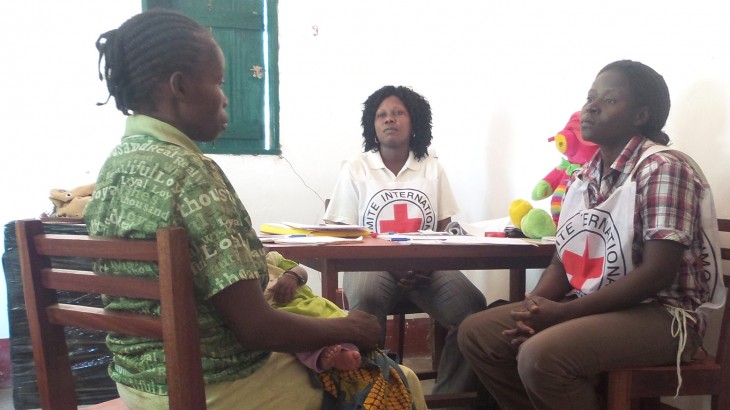 When people witness killings, or the looting of all their property, or when they are raped or tortured, they suffer from psychological trauma and require emergency help. Erica Pellizzari, a clinical psychologist, works in Nana Gribizi province, north of Bangui. She has had considerable experience helping people with psychological problems in the Palestinian territory, Haiti, the Democratic Republic of the Congo, and China. She describes here the situation in the Central African Republic.

What do the people seeking help in the health centres that you supervise suffer from?

Most of them have experienced a traumatic event connected with the war in the country: they were injured or abducted, or they witnessed the murder of their loved ones, or the destruction of their home. They suffer from a number of different symptoms, such as frequent nightmares, flashbacks, sleep disorders, eating disorders, anxiety, aggressiveness, the feeling that their lives have stopped or have no meaning, isolation, avoidance response, or difficulties with concentration and memory.

This situation is new, as it is connected almost exclusively to the presence of armed men in the region, and aggravated by the almost total impunity they enjoy. The region hasn't always known peace – that's clear – but the current conflict has been going on for a long time and is particularly violent.

Since mid-July we have provided care for more than 260 people, around half of them victims of sexual violence. What's difficult about these cases is that it's essential that people who have been raped receive medical treatment within 72 hours of the incident in order to reduce the risk of contamination by sexually transmitted infections and diseases – HIV in particular – and to obtain whatever emergency contraception is permitted under national law.

How are victims of violence treated within their communities?

The risk of being rejected by the community because of having been raped or having become "a little unhinged" is quite real. Symptoms such as nightmares or aggressiveness are often wrongly interpreted by members of the community and also by the victims themselves. This is itself a cause of further anxiety and suffering. The victims often view themselves as "wrecked," incapable of recovery, or cursed. Accusations of witchcraft or of possession by demons are common.

I remember a young boy who was abducted and tortured. His friends made fun of him because of what had happened; they didn't have the slightest inkling of the suffering he was going through. That's where awareness-raising is essential – among the population, of course, but also, especially, among religious and traditional leaders and village chiefs. It often happens that they're the ones who direct people in distress to health centres and who help to reduce stigma.

Before actually providing care for victims, our staff traveled to every corner of the region to explain the causes of these symptoms and the way to treat them. The response has been remarkably good. For example, more than 70 per cent of our patients who have suffered violence (other than sexual violence) are men. It's not everywhere that efforts to promote mental health command such trust.

What is the role of the ICRC in providing care for victims of violence?

Here it is not possible to concentrate on a single kind of violence and ignore the other kinds. Our door is open to everyone who suffers. Thanks to the presence of a psychosocial assistant, a nurse and a midwife in the health centres of three villages in the region, the patients can benefit from various treatments, such as those based on medication, on listening, etc.

Our medical personnel are not from the region, which I think is reassuring to the patients. It's also a way of having better skilled staff in such a remote area. Patients presenting psychological distress associated with trauma, after having been referred if necessary to a midwife or nurse, are listened to in an attentive, caring way by psychosocial teams.

What happens in a listening session with victims of violence?

Using open-ended questions, we focus on the suffering associated with a traumatic event and attempt to help the victims cope with their problems and regain their ability to manage on their own. That's what we call resilience.

We also use relaxation and breathing exercises, which are much appreciated by the patients. The exercises help relieve the symptoms of hyperarousal (such as concentration problems, constant nervousness, constant fear, irritability and insomnia), which are very common among people who have experienced a traumatic event. We sometimes make house calls if that's what's needed to deal with a particularly delicate situation, or to do family mediation.

A rape is primarily a tragedy for the victim, but it can also be a tragedy for the couple. Our role is to help families overcome these kinds of problems. When the patient manages to go out again, to return to work and to live with the situation, and the symptoms have subsided sufficiently, then the objective has been met.

Listening work is sometimes hard, but the good results that we obtain are a real source of motivation. More than 75 per cent of our patients return for a second or third visit. That's a sign that they are truly benefiting from the treatment they receive in our health centres.