Central African Republic: ICRC condemns attack on its Bouar office and calls for humanitarian workers to be respected 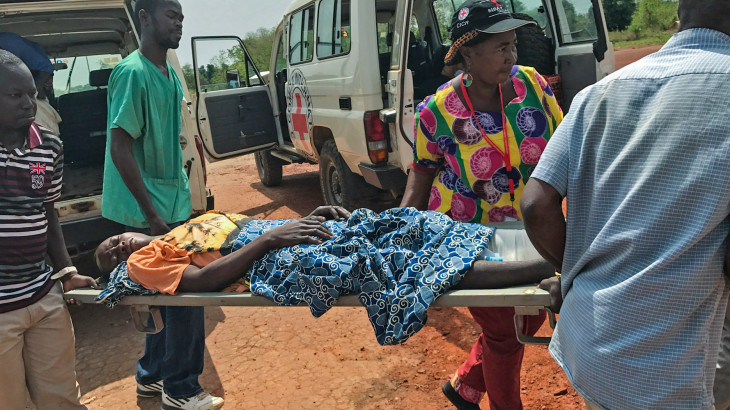 An ICRC team evacuates a wounded person from Kaga-Bandoro to the capital, Bangui, in 2019. © Noura Oualot/ICRC

Bangui (ICRC) – The International Committee of the Red Cross (ICRC) has been forced to drastically reduce its humanitarian activities in Bouar in Nana-Mambéré prefecture after its office was raided. Some ICRC staff will be moved to other locations in the Central African Republic until security in the town can be restored.

During the night of 27 December, armed individuals broke into the ICRC's premises in Bouar. They injured three guards before looting the buildings and removing all equipment and supplies, including veterinary products that were destined to support livestock owners.

"This attack is completely unacceptable. We cannot work in these conditions," said Bruce Biber, the ICRC's head of delegation in the Central African Republic. "We have no choice but to temporarily scale down our humanitarian operations and to restrict the movements of our teams in Nana-Mambéré until the security situation in Bouar improves. At the same time, we are determined to continue, and even to increase, our activities in other parts of the country that have been particularly affected by the current fighting."

Around the same time, an armed individual entered the grounds of the ICRC-supported hospital in Kaga-Bandoro, threatened medical staff and robbed them of their personal possessions.

These incidents are taking place in the context of a deteriorating security situation that has suddenly worsened over the past few weeks following clashes between armed groups and state forces. Tensions linked to the elections have prompted the ICRC to send out its teams in recent days – together with staff from the Central African Red Cross Society – to help the wounded and to transport them to health facilities. The ICRC also plans to send an emergency surgical team to Kaga-Bandoro Hospital to support the team there.

As fresh violence erupted in the town of Bambari on 22 December, the ICRC's teams evacuated 15 wounded people to the local hospital and took three dead to the mortuary. In Bangui, the ICRC has provided medicines and equipment to several of the town's hospitals, which have been overwhelmed by the influx of wounded people. The ICRC is also visiting people who have been detained as a result of the violence. None of these humanitarian activities can take place unless humanitarian workers are protected and can work in safety.

"We will not tire of reiterating the point that humanitarian workers are not a target. Every time we are attacked, it is our capacity to help the most vulnerable that is limited," stressed Bruce Biber. He added, "Health-care facilities and workers, sick and wounded people, and medical transport must be respected. Staff providing medical care must have access to the wounded, they must be able to provide first aid or any other treatment to anyone who needs it."

For several years now, the ICRC has been running major programmes in Bangui, Bouar, Kaga-Bandoro, Ndélé and Bambari to help people affected by armed conflict and violence. The ICRC provides all people, without distinction, with emergency food supplies, basic items and seed. It reunites separated families, visits people who have been detained, treats sick and wounded people, improves vulnerable people's access to water and helps them restart their livelihoods. All of these programmes, some of which are run jointly with the country's National Society, save lives and alleviate the suffering of thousands of people.

The ICRC calls on all parties to increase their efforts to make sure people can receive the help they so desperately need.