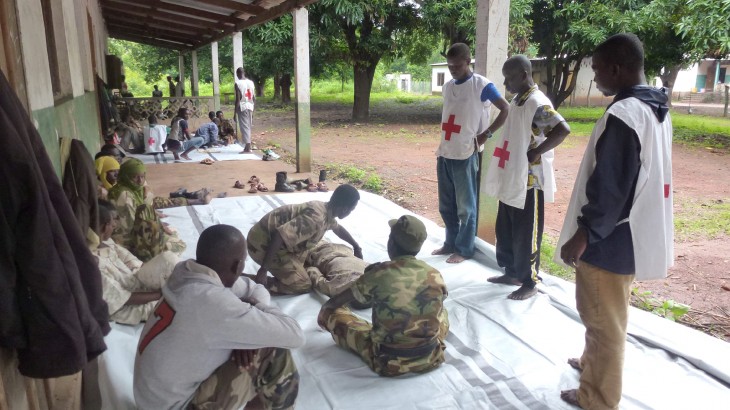 Killings and acts of physical violence committed against civilians, the destruction of homes and businesses, attacks against rescue workers: the list of violations of international humanitarian law taking place on an almost daily basis is long. Just as it is imperative that emergency action be taken to save lives, it is essential that weapon bearers be convinced that they must obey the rules that protect civilians.

"Spreading knowledge of the basic rules of international humanitarian law, such as those that prohibit attacks on people who have been injured or on medical vehicles, is one of the ICRC's priorities in the Central African Republic," said Jean-François Sangsue, head of the ICRC delegation in Bangui. "The actions of the parties to the conflict have a direct impact on the victims. The parties therefore need to know the rules. They need to respect them and enforce respect for them."

The challenge is enormous. How is it possible to preserve even a little humanity when hatred is so strong, when the desire for vengeance is so great that it seemingly justifies anything? How can armed groups or civilians taking up arms be taught the basic rules of international humanitarian law when the country is rife with chaos and danger, and plagued by impunity? It is difficulties such as these that the ICRC strives to cope with every day in the Central African Republic by means of neutral and impartial humanitarian work and regular dialogue with the parties to the conflict and everyone taking part in the armed violence. The aim is twofold: to bring about greater respect for the rules of international humanitarian law and the rules applicable in law enforcement operations, and to give the ICRC, the Central African Red Cross Society and other components of the International Red Cross and Red Crescent Movement safe access to detainees and other people needing help. The meetings between the ICRC and weapon bearers (armed groups, international forces, gendarmerie, police, and armed civilians taking part in the fighting), whether organized as training courses or as information sessions customized to suit each audience, are intended to bring about greater respect and improved protection for the wounded, the sick, detainees and the population in general.

Since the beginning of the year, hundreds of personnel from the anti-Balaka and ex-Séléka armed groups have attended sessions in Bangui and elsewhere on the basic principles of international humanitarian law, such as the protection of the civilian population, and respect for human dignity and for medical services. In Bambari, Kaga Bandoro, Kabo, Dekoa and Boda, the same message was repeated for these parties to the conflict. 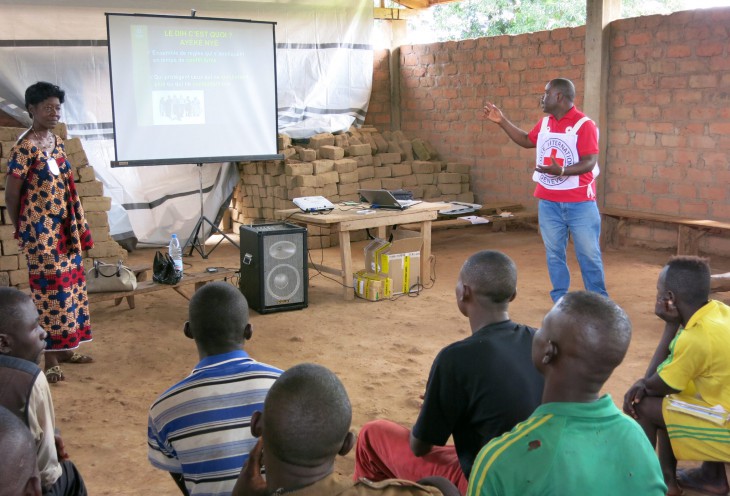 "This is a long-term effort," said Mr Sangsue. "Contact has to be constantly maintained, and we have to tirelessly explain and inform, and promote respect for the basic rules of international humanitarian law. Better knowledge of the law can help prevent people from breaking it."

The ICRC is also in contact with all foreign, regional and multinational forces in the Central African Republic. Both at the time of the African-led International Support Mission to the Central African Republic (MISCA) and ahead of the United Nations Multidimensional Integrated Stabilization Mission in the Central African Republic (MINUSCA), some military and police contingents from troop-contributing countries attended information sessions on international humanitarian law and human rights. In some countries, the ICRC provides training for troops set to leave on a UN mission prior to their departure, as was the case for Rwandan, Senegalese, Cambodian and Tunisian contingents. Two days after the UN mission in the Central African Republic officially began, the ICRC met in Bangui with the commanders of the contingents and with senior staff of MINUSCA to discuss certain humanitarian problems and the cooperation expected between the military branch of MINUSCA and the ICRC, just as it had done previously with MISCA. The ICRC is also in regular contact with the European Union Force (EUFOR) and with the French Sangaris force, a party to the conflict.

"Since the beginning of September, the country's security forces have been undergoing training and rebuilding," said Anand Appadoo, an ICRC delegate in charge of training police units. "We are involved in the training of more than 300 Central African police and gendarmerie personnel. The focus is on learning how to behave in accordance with international human rights law."

Because civilians have also taken part in the violence, the ICRC endeavours to raise awareness of humanitarian rules in neighbourhoods and villages. In Bangui, Ndélé, Kaga Bandoro and Bambari, meetings have occasionally been organized with community and religious leaders and with youth organizations where humanitarian problems and the most basic rules of humanity – those that everyone must obey – have been discussed.

In close cooperation with the Central African Red Cross Society, the ICRC is sharing its knowledge of rescue techniques and emergency medical assistance with community representatives and members of armed groups. Because most of the latter have never received training in first aid, they are unable to provide proper care for combat casualties. For fighters and civilians alike, life-saving skills are all the more important as the small number of health-care facilities in the country that have not lost all their personnel or been destroyed are often situated far from combat zones. 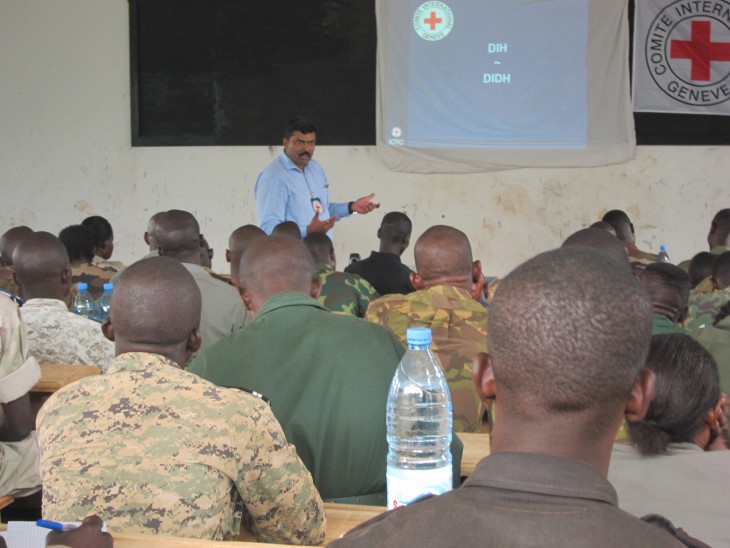 Between 21 August and 25 September 2014, in cooperation with the Central African Red Cross, the ICRC:

●    saw more than 11,000 patients, covered the cost of hospitalizing more than 350 sick patients, and performed over 90 operations and over 90 deliveries in hospitals and other facilities in Bangui, Kaga Bandoro and nearby;
●    reunited eight children with their families after they had been separated by the conflict, including one child who had been in an armed group, and restored contact between 25 individuals and other members of their families;
●    provided the detention centre in Bangui with enough basic medical supplies to treat up to 1,000 people;
●    built a 70,000-litre water reservoir to boost storage capacity at a site at the airport where displaced people have gathered;
●    raised awareness among more than 21,000 people of proper hygiene and sanitation practices;
●    provided drinking water every day for 10,000 people in the hospital of Ndélé and elsewhere in the city;
●    provided food aid for nearly 17,000 displaced people at seven sites in Bangui;
●    vaccinated 3,000 head of cattle in the Kaga Bandoro area against contagious bovine pleuropneumonia.

During the same period, ICRC staff also visited more than 400 detainees to assess the treatment they were receiving.