The challenges for humanitarian action in today’s conflicts: the perspective from the International Committee of the Red Cross

Speech given by Mr Peter Maurer at the Moscow International Security Conference, June 23, 2021 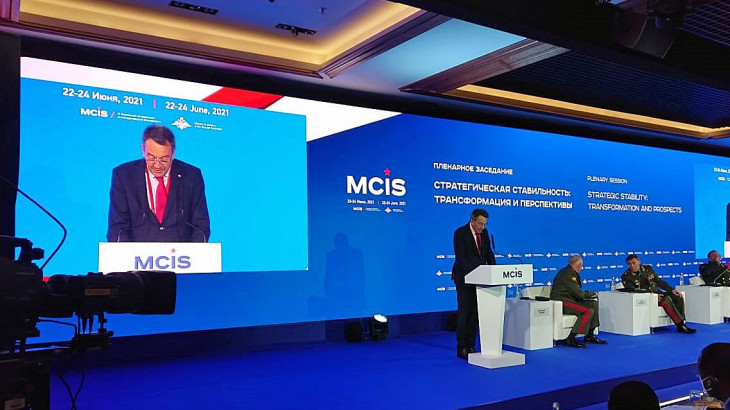 It is a pleasure to address you today and I extend my warm appreciation to Minister of Defence Sergey Shoygu. I note with appreciation the deepening interaction between the ICRC and the Russian Federation, notably in contexts like Syria and Nagorno-Karabakh and through our permanent dialogue in Moscow, Geneva and other capitals.

From its beginning almost 160 years ago, the ICRC has been about much more than the delivery of emergency aid. While humanitarian assistance is necessary to help people survive, it is not enough to break vicious cycles of violence.

Changing behavior to better respect international humanitarian law is critical in order to protect civilians and those not or no longer participating in combat.

Our aim is always humanitarian, our actions are based on the principles of neutrality, impartiality and independence, our objectives are the trust of all parties to conflict and access to the most vulnerable communities.

ICRC works to protect people's life and dignity: for example to treat the wounded and detainees; or to ensure the respectful return of mortal remains including soldiers. We work through the mandate provided by States in the Geneva Conventions and in other frameworks governing the use of force in situations of conflict.

In today's conflicts, we are challenged by a convergence of complex and interlinked factors: from the fragmentation and proliferation of actors, the privatization of warfare, the widespread availability of weapons and high levels of criminal violence on top of armed conflict.

Vicious cycles of violence are leading to protracted conflicts where countries are in crisis for decades.

This year marks 40 years of ICRC operations in Iraq. We have been in Yemen for more than 60 years, Afghanistan for 33 years.

The result of endless wars is humanitarian needs on a catastrophic level: from the immediate impact of the hostilities to the destruction of infrastructure and social systems.

We live in a time of massive displacement due to violence and conflict and a lack of hope for too many people victimized by war. Violence weakens societies, making them more prone to the impacts of climate change, pandemics and other challenges.

Today, I bring to your attention four dynamics that are creating concerning humanitarian consequences and demand our collective attention.

One: As the world has urbanized so have conflicts, bringing new challenges.

Whole systems and communities are weakened when fighting occurs in densely populated areas and suffer from the cumulative impacts of unrestricted warfare, violence, poverty, pandemics, sanctions and bad governance.

Each time an alliance is formed, a bond is created that has the potential to worsen – or reduce – human suffering.

The ICRC invites all actors to look further at how their influence in partnered military operations can be leveraged – not only to win wars at any price – but to protect civilians. We are ready to engage and continue dialogue with armed forces on this topic.

Three: While addressing today's needs, the ICRC also keeps watch over the challenges of tomorrow.

Advancing technologies are giving rise to new weapons and modes of warfare and in turn creating new humanitarian concerns. For example, over the last year, the pandemic was accompanied by cyber-attacks on health care and electricity systems, posing serious risks for civilian infrastructure.

We also remain concerned about the potentially indiscriminate impacts of autonomous weapons and the profound ethical challenges they pose.

Four: The global pandemic has brought a further layer of challenges to conflict – not only health or economic issues, but also for security actors.

In a major evolution in law enforcement, armed forces and other security actors are increasingly involved in public health responses - whether through implementing quarantines, supporting health care provision or border controls.

This has raised challenges for armed forces operating under potentially unfamiliar law enforcement legal frameworks within a domestic context.

To assist militaries to navigate this complexity the ICRC released a handbook to support legally compliant law enforcement operations, including to uphold the obligation to avoid unnecessary or disproportionate use of force.

Excellencies, the four factors I have mentioned provide challenges for humanitarians and militaries alike. The ICRC seeks to work with you, sharing perspectives from our operational experience combined with our expertise in international humanitarian law.

IHL remains a powerful guide in balancing military necessity against the humanitarian imperative. IHL is time tested, based on customary rules codified by militaries, alongside States and the ICRC.

IHL recognizes the use of force as a legitimate tool in armed conflict. It provides rules to guide the application of force, ensuring legally compliant operations and reducing humanitarian consequences. IHL must be integrated into military education doctrine, training, planning and operational conduct.

Exceptionalism or transactional approaches to the law; or narratives which blur the armed conflict threshold should not be accepted.

Ladies and gentlemen, ICRC is a reliable and predictable partner for today and for tomorrow. Our approach is two way; the experience and perspectives you share with us are also critical.

We engage with militaries and police in over 110 countries worldwide and last year we had contact with some 465 non-state armed groups. Through confidential bi-lateral dialogue with commanders we share perspectives on operations and enhance compliance with the law in their planning and conduct.

We provide our wealth of legal and operational expertise from conflicts, supported by over 70 specialist delegates who are former senior military and police officers.

Our dialogue is supported by practical resources; commander's handbooks, tools and innovative IHL learning methods such as virtual reality training.

Excellencies, I believe it is the quiet – but robust – dialogue based on practical and pragmatic cooperation with armed actors in today's conflicts which will help to ensure better respect for laws and principles.

In fora such as the Moscow International Security Conference we also continue the valuable discussions and I look forward to hearing from our distinguished panellists.