China: a conference to mark the 40th Anniversary of the Protocols Additional to the Geneva Conventions 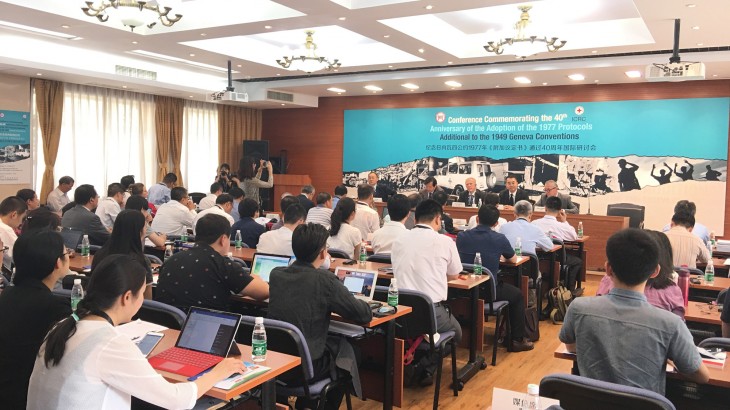 Beijing (ICRC) – An international conference opens today in Beijing to mark the 40th Anniversary of the adoption of the 1977 Additional Protocols to the Geneva Conventions. This Conference aims to facilitate exchange of experiences and views on International Humanitarian Law (IHL) between International Committee of the Red Cross (ICRC) and Chinese experts, as well as to help the ICRC have a better understanding of China's perspectives on IHL issues.

The two-day event, organized by the ICRC in cooperation with the Institute of International Law of the Chinese Academy of Social Sciences, gathers nearly 100 participants, including experts and scholars from the Chinese government, the legislative body, the People's Liberation Army, Chinese National IHL Committee, think tanks, academic institutions, and the ICRC.

"The adoption in 1977 of the two Additional Protocols to the Geneva Conventions was a milestone in the regulation of armed conflicts. Both Protocols spell out fundamental guarantees for all persons in the power of a party to an armed conflict. Forty years after, these rules remain pertinent, said Yves Sandoz former Director of Doctrine and Law at ICRC and Honorary Member of the ICRC Assembly. "Since then, new rules have also been made to reflect the change of modern conflict. These rules are still playing a role in the frontline of modern armed conflicts."

The conference will cover a range of current IHL issues, including key achievements and challenges of the 1977 Additional Protocols, rules and principles on the conduct of hostilities and their application in modern warfare, new technology and warfare, repression of breaches to the Geneva Conventions and their Additional Protocols, ensuring respect for IHL and China's contribution.

"The Additional Protocols along with the 1949 Geneva Conventions have formed the foundation of the IHL and it's of great practical significance to disseminate and study these conventions in China, said Professor Chen Zexian, Director General of the Institute of International Law (CASS). This conference will facilitate the sharing of our respective knowledge and experiences of their implementation.

China is a State Party to the Geneva Conventions and Additional Protocols I and II. The Chinese government actively participates in current processes relating to the implementation, and development of IHL. The Chinese National IHL Committee, an inter-ministerial body, was established in 2007 to better coordinate and promote the domestic implementation of IHL. The ICRC is keen to further develop its dialogue with China on IHL related issues, and ensure support for its humanitarian operations around the world.